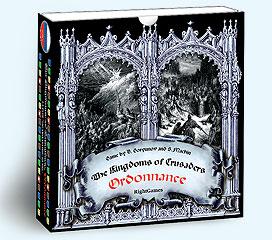 I am growing increasingly fond of Russian games, which is kind of odd, if you ask me. I grew up in the 80's, when we were all pretty sure that the Pinko Commies were going to start a world war that would kill us all in a nuclear Armageddon. The only people we hated more than the Soviets were the guys who dug through a freshly opened box of Lucky Charms to get the toy before the cereal was gone. But all that changed after Reagan took down the Berlin Wall by telling someone else to do it, and now I'm finding out that those wily Russians have some pretty awesome stuff going.

I've done a few reviews from the Russian publisher called Right Games, including Kingdoms of Crusaders, which is the base game for the expansion I'm reviewing right now. For what it's worth, I also have a Russian game with plastic robots and stuff that was called Robogear when it was published in English, but the rules (and the box) are in Russian so I don't know how you play it. That's not really relevant, but it's pretty cool anyway.

The thing is, the only way you can play Kingdoms of Crusaders with more than two people is to have multiple copies of the same game. If you combine your set with your friend's set, then you can play four players, and after that, have no idea who owns which cards. So what the game needed was an expansion that would let you play with four people without having to buy an entirely new copy, which is where Ordonnance comes in.

(Quick aside - 'ordnance' means weaponry. An 'ordinance' is a law. And an 'ordonnance' is a law in France. So obviously, this expansion takes the basic idea of the Crusades in the Middle East and adds Parisian attorneys, who as history tells us, were frequently launched over the walls of besieged cities to spread disease and frivolous lawsuits. That, or this expansion wasn't translated very well.)

If you just want to play a four-player game of Kingdoms of Crusades, Ordonnance can do that - but that would make kind of a lame expansion. So to make it worth your while, Ordonnance also has crazy expansion cards that do all kinds of different things. Has your opponent claimed an indomitable lead in Jerusalem? Now you can negate his knights and leave him trying to hold the area with a couple spearmen and an incontinent poodle. Are you hiding the cards you need to rule a spot with just three cards? Slap down an area limit and lock down that cocky bastard.

There are also some crazy double-up cards that put all your eggs in one big, gun-toting basket. These make it really hard to beat your banners - but if you lose those banners (thanks to the cards in Ordonnance, probably those French lawyers), you've got a big bag of nothing. Usually, these cards are really hard to beat, but it only takes one card to make them a liability.

So where there was one tense, smart game, now there are three ways to play. You can go with the original, with its tight, clean design and razor-wire decision-making. You could mix it up and play with a couple more friends. Or you could add the wacky cards and throw a little chaos into that game.

The original is, as I said, a very smart game. There's bluffing and feinting, power plays and strategic retreats. Every move is a combination of an attempt to gain ground and a mental misdirect. It usually comes down to a very close three-to-two split, and it's a rush getting to the end.

With more than two players, though, Kingdoms of Crusaders is a very different game. With two, it's focused like a laser pointer. With three or four, there's an injection of anarchy that makes it a lot more unpredictable. The game becomes more interesting, but less of a duel of wits. It is still fun, but it's just not quite as cerebral. Honestly, I didn't like it anywhere near as much as the two-player version. It just loses that every-card-counts feeling, and that's my favorite part.

The two-player game with Ordonnance, however, is exactly the opposite of what I expected. I was counting on the game to lose some control and tension, because now there are all these unpredictable rule-breakers that change up the game while you're playing it. I was wrong, though - the added sneaky element actually ramps up the paranoia. You may think you've got an area nailed down cold, but until the final card drops, there's just no way to know. You have to plan ahead, maneuver more cautiously, and take into account all the various ways your opponent could steal the win with a last-minute play that may cause you to throw down your cards in shocked rage. You would be a total bitch if you did that, but you may want to.

If you're ordering Kingdoms of Crusaders, maybe because you would really like a great two-player card game, I would recommend picking up Ordonnance at the same time. Even if you never intend to play it with four people, the added game play options will make your game even more exciting and variable than it was before. If you're just buying it for the four-player game - well, you may want to hold off. It is fun with a group, but nowhere near as teeth-grinding and agonizing as the original.

What I really need to do now is find a bunch more Russian publishers who can send me stuff to write about. Maybe I can find out if, during the 80's, they were all worried that the United States was going to nuke them into the Russian version of Mad Max Beyond Thunderdome. Maybe they have some bad-ass games about the US invading the USSR that was a classic back in the day. But really, if I really want to play Russian board games, I will probably have to learn to read Russian, which is not particularly likely. So for now, I'll settle for the cool stuff cranked out by Right Games.

Pros:
Adds lots of intensity in the 2-player game
Makes a good game even better

Cons:
Loses some of the brilliance when you play with more than two

Right Games is serious about selling you some games. They've set up a whole eBay store where you can get all their killer Russian card games, and shipping is far more reasonable than it has any reason to be:
http://www.russianboardgames.com/buy_now.html
Posted by Matt Drake at 2:56 PM

Dude! That is awesome! Thank you!