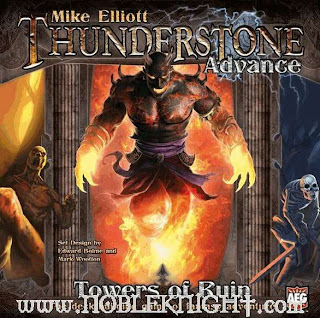 In those poignant moments of life we occasionally hear folks say they wish they could have a chance to do it again, but differently. Like after a divorce, or when knowing life is coming to an end due to cancer. (Serious opening, but bear with me). Most all of us wish we could go back and, knowing what we know now, take another swing at it.

Well, AEG has had that rare opportunity to go back and do it again, but this time better. Thunderstone Advance is all the old Thunderstone but the little tweaks that we found irritating have, by and large, been cleaned up and improved, so that the end product is, in my opinion, better than the older experience. I’ll elaborate.

When you open the box you immediately come upon the new game board. For those of you who have played Dragonspire, you know the board that came with that game. A genuine piece of … well, I really didn’t like it. It had spaces for the dungeon deck and cards in the three ranks and for any Guardian that managed to slip out of the dungeon, but the board was WAY too big for what it accomplished, so it was a great waste of table space. When I first pulled the board out of Thunderstone Advance I thought, “Oh, no, not another crappy board.” And maybe this was where my opinion of Advance began to have hope, because when you open up the board you find something altogether new and VERY helpful for game play. Not only does it have spaces for the dungeon, but also for all the village cards and sundry cards. AND, not only that but it leads you through set-up so that you don’t end up with all weapons or spells or villagers, but helps spread the cards around. Now, fellow gamers, THAT’S an IMPROVEMENT! And, I might venture, a stroke of genius. Oh, don’t let me miss mention of the fact that the new board is double sided. One side shows the dungeon/village, the other side for playing the wilderness. (Can you guess what expansions will come along?)

The rulebook to TA is a delight for the veteran gamer to read. Some of the older Thunderstone rulebooks looked as though they were rushed past the editors so several stupid mistakes went to the printer. Ah, to be allowed to go back and do it again, but better. I didn’t read the new rule book as if I was the editor, but in my reading of the new rules I didn’t find nary a one misspelling or stupid error. Good job, AEG!! But not only did they send the rules to the editor, but they spent the time to do a crack-up job on describing play and on illustration. This is a beautiful book, and laid out in such a way that a new gamer to Thunderstone will pick it up immediately. You’ve set the bar very high this time, AEG – now to live up to it in future expansions.

A few years back when Matt and I first played Thunderstone, after the game we talked about the need for another action – to be able to improve your hand to enter the dungeon, instead of just tossing those cards aside and grabbing another. What a surprise, while reading the new rulebook, to come across the new addition of the action “Prepare”. I was dancing around the room and feeling absolutely validated. (OK, so maybe not dancing per se, but at least gesticulating there in my chair.) That alone made me love TA, but the entire package deserves positive mention.

A new addition to the game is “Familiars.” Kind of weird, and I’m at a loss to understand the rationale for including them, but they’re a cool touch. Early in the game you get to take a familiar – kind of like a side-kick animal or mythical creature that decides to follow you like a dog – and at certain moments they might just throw a helpful trick your way. I like ‘em. Wish I had one in my non-gaming life, but then I already have two dogs – not that they ever do more than bark when someone comes to the door.

New diseases, as well as curses, militia has been replaced by “Regulars” and they’re much more reliable (and stronger) though sad to see Richard Gere go, some really great new cards, starting decks now have their own divider cards so you can keep a player’s set ready to go, and, well, you get the idea – I’m very happy with the new game.

If you’re a veteran Thunderstone gamer, you’ll definitely want to pick up this “went back and did it again” version. If you’re new to the game, skip the earlier ones (though I enjoyed them as well – um, maybe not all the expansions) and start here.

Cons:
Richard Gere is no longer in the game.
You’ll have to find space for all the boxes that you won’t need when the expansions come out.

If you're all 'wow, where can I get a copy of Thunderstone Advance?!' possibly because you have not been paying attention to any of the other reviews here, or maybe you're just new in these parts, I can help you out. Not only can you get this great redo from Noble Knight Games, but you can save ten bucks on it, and if you mention Drake's Flames when you buy it, you'll even be helping me out.
NOW THAT'S A BARGAIN
Posted by Matt Drake at 7:32 PM