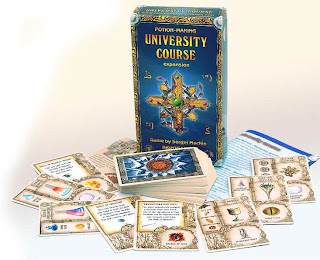 Last year, the Russian game company with the horribly misrepresentative URL 'russianboardgames' sent me all their games (and they are all card games). My favorite of the bunch was called Potion-Making Practice, and it was a big hit in my house.
Then my house caught fire and all those cool Russian games went up in smoke.

Then the publishers, who are awesome, sent them all to me again, this time with all the expansions that they had just translated into English. Two of those expansions were for Potion-Making Practice, and they're good enough to warrant two reviews.

In my original review, I poked some fun at the title of the game. Potion-Making Practice sounds like a boring high-school class in a very interesting world. But now that I've played University Course and Guild of Alchemists, the 'practice' part makes sense. Because the original really is just a warm-up.

Quick recap - Potion-Making Practice is a tough game to play. It's hard as hell to make the potions you need, because there are 16 components in the game, and often less than eight on the table. The potion you need might be sitting on the table where you can't get it, or it might just be that it never gets made at all. There are never as many spell cards as you might want, and for the player who just wants to dive in and start putting together some cool magical cocktails, Potion-Making Practice can be frustrating.

University Course changes that dramatically. This expansion (with nearly as many cards as the original) introduces wild-card components, lesser talismans with ongoing effects, and gobs and gobs of spells (I recently started saying 'gobs' after I read it on a website out of Britain. I am hoping it makes me sound more refined, to try to balance out any potential references to genitals or poop). Now there are tons of ways to get the cards you need, and since you can play two cards in a turn, tons of opportunities to use them.

In fact, University Course can be almost as bewildering as Practice, but for the completely opposite reason. Where the original made you watch like a hawk and manage your hand like a miser, University Course will allow you to whip up magical concoctions left and right. Now there are so many potions on the table that scores will skyrocket, and there will be so many low-level creations in play that it will become far easier to build the more expensive drinks, like the Supreme Elixir or the Unicorn or the Coronarita.

The difference is striking. Where Practice is an intense game about patience, timing and opportunity, University Course is a wheels-off free-for-all. Both are fun, but they are very different games (even though University Course is just an expansion, and you still have to have Practice to play it). Plus, since the end-game conditions require that both decks be depleted, the game is almost twice as long with University Course. This is not optimal if you start a game at 9:30 when you have to work the next day and end up staying up until one in the morning.

If you prefer your games subtle and cerebral, you are not going to want to play University Course. It is not subtle and cerebral. While it definitely requires some strategic decision-making and moderate card management, it's so easy to make potions now that some of those decisions just don't seem as important as they did before. Without the scarcity of resources, it's not at all difficult to put things together, and that means less caution, less analysis, and more wild romping.

Some people, of course, love wild romping. It is undeniably more entertaining to make potions than to sit there, looking at the table, seeing nothing you need and just slapping down a component card because you're stuck with no options. At the same time, however, one of the things I love about Potion-Making Practice is that you're making all these subtle decisions, but they can have a huge impact. Your decisions in University Course lack that anguished gnawing feeling you get when you wonder if you just threw down the wrong card, because now you can just pull a few cards off the blue deck and probably get that wrong card back.

If you have played Potion-Making Practice (and if you like it, which I suppose is an important requisite), I heartily recommend picking up University Course. It changes the way you play, but it lets you do what the game says you do - make potions. And after all, isn't that the name of the game? Yes, it is. It's written right there on the box.

Pros:
Opens up the game and provides a lot more options
Makes it easy to make potions
Adds a lot of energy to the original
More of everything is just more fun

Cons:
Reduces the penalty for bad decisions
Makes it easier for a poor player to beat a good one

University Course takes Potion-Making Practice in a completely different direction - one where you get to actually make a lot more potions. You can find it on eBay, right here:
MAGICAL BARTENDING
Posted by Matt Drake at 2:32 PM