Storytelling Game Review - Do: Pilgrims of the Flying Temple 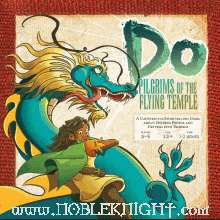 Lately, I've become fascinated with cooperative storytelling games. I've always had a soft spot for roleplaying, but some part of me has always thought it was not fair that one guy had to do endless hours of work, and everyone else just has to show up and ruin everything that first guy created. Since I'm usually that one guy, and since it's hard to keep coming up with stuff to feed those ungrateful louts who shoot all my bad guys before they destroy all my evil temples, it's great to see games where everyone participates in the game at the same level.

Do: Pilgrims of the Flying Temple is a pretty wild little game that allows a remarkable amount of storytelling without anyone having to be in charge. It can run the gamut from light-hearted and silly to gritty and thrilling, and when everyone is in on the story all the time, you never know where it's going to wind up until you get there.

The basic premise of Do is that all the players are teenagers raised in the temple at the center of the universe, which is a huge place full of breathable air and populated by thousands of tiny planets. The monks teach them how to fly, but these kids can't be full-fledged monks until they finish their pilgrimages. So the earnest do-gooders fly out into the universe, read letters written to the temple, and solve problems.

That's the concept, at least. In actuality, the pilgrims are trouble-prone teens who are exceptionally likely to cause considerable property damage before they finish whatever they started. This dichotomy is expressed in each pilgrim's name. For example, Pilgrim Bushy Finger might help people by growing leaves out of his butthole, but get in trouble by getting his fingers stuck in embarrassing places. Man, if I had a dollar for every time that has happened to me...

Well, I would have eight dollars.

The way the game works, you're almost guaranteed to get into trouble. And when you do, your friends will help you, by gleefully coming up with some ridiculous tale of how you did something incredibly stupid. You can try to get out of trouble on your turn, and you'll need to get free, because you can't help until you do.

This is all accomplished by an incredibly simple but thoroughly brilliant mechanic. Each turn, you'll draw three stones from a pouch, and choose to keep from zero to three. If you keep three, you can perform some amazing act of heroism, but if you choose zero, you'll be able to extend the story. Since your goal is to use all twenty of your 'goal words' (as detailed by the letter-writer you decide to help out), it's not a good idea to end the game too fast. You need to keep it going, so that you have a chance to write enough story to solve the problems. The game becomes a careful balance between routinely getting in over your head and attempts to be at least mildly heroic. If you maintain this balance, you'll overcome obstacles and save the planet that was swallowed by a giant air whale. If you fail, the whale will poop you out, and the planet will still be swirling around the whale's lower intestine.

There are a lot of elements of Do that make it a pretty great game, but there are also sacrifices made to make it a more collaborative exercise. When one person is in charge, you've got at least one person who can guide the story and keep it on track. If your game master is good, he can maintain good pacing and keep everyone involved, make sure the story moves forward, and otherwise make sure the end result is fun. Without that controlling factor, you may find yourself subject to considerable down-time, meandering plots, and frustrating developments.

In fact, this is really my biggest complaint with playing Do - it's a free-for-all. There are rules in place to keep it from flying too far off the tracks, but if you've got any control freaks in the audience, they're going to be pulling out their hair by the roots. To be able to enjoy Do, you have to be relax, roll with the sudden changes, and improvise wildly.

But even though Do is like driving a freight train downhill with no brakes, it's also a ton of fun. Discovering the end of the story is a blast, but the journey is the important part, not the derailment that takes out Barstow. You might not have expected Pilgrim Dopey Farts to wind up covered in whale snot and hanging upside down from a tree, but as long as you can laugh about it, you can have a good time. And the stories you tell will be fresh, authentic and totally your own (as long as, by 'your own', you mean 'belonging to you and the handful of miscreants who thought it would be funny if you were stuck down at the beach wearing only a sock and a woman's high-top sneaker').

Pros:
Roleplaying without the GM
Innovative, fresh and fun, like DJ Jazzy Jeff, but not as urban
Fun, clever setting

Cons:
Can be pretty chaotic
Good chance of boring downtime

If you want to try a new kind of story game, Do: Pilgrims of the Flying Temple is a great place to start. Noble Knight Games has it, and you can even save some green on it:
PILGRIM SAVING MONEY
Posted by Matt Drake at 2:34 PM