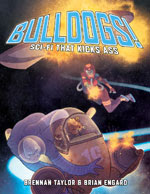 I love sci-fi RPGs, especially if they're high-energy and campy. Give me Star Wars over Traveler, for instance. I love space dogfights, but those would just be sort of drab in real life, as two ships who are too far apart to see each other fire missiles across space and activate countermeasures. I want screaming Tie Fighters, even though you couldn't actually hear them in space.

So Bulldogs! is exactly my brand of sci-fi RPG. There are a bunch of different alien races (none of which are expressly human), laser cannons on spaceships, blaster pistols and floating space stations. It's got a lovably anarchistic basic concept, and enough room to let you play whatever kind of game appeals to you. Since I was the one running it, we went with a cross between Firefly and Star Wars, and added some Ice Pirates for good measure.

This theme was pretty easy to pull off with Bulldogs!, because it's actually the basic concept the game offers up. That's a bit of a time-saver. Plus this concept has a lot going for it - just figure out why each of your violent miscreants is willing to take on a ridiculously high-risk delivery job, and then you don't have to work out how they all know each other. Then the company you work for gives you jobs, and you take them, and BANG - instant adventure-starter. It's the space version of meeting an old man in a tavern.

Once you start the job, the fur starts flying (if you're playing the cat-people or bear-people - otherwise hair is flying, or skin, or bits of teeth and stuff). The game is designed to make it really easy to just dive right into the action, and to give you lots of cool places to fight. Instead of gridded movement and measured ranges, battlefields are divided into zones. If one guy is in an alley up the street, and another is on a rooftop across from the alley, and a third is standing in the middle of the street, that's three zones. You don't have to get all technical with miniatures and engagement penalties and stuff. You just say, 'I'm going to dive tackle the guy in the alley,' and then you roll for it. It's that easy, and it's a heck of a lot more interesting than having the whole game take place on a sheet of oversized graph paper.

Another thing that Bulldogs! has going for it is that it's based on the FATE system, which is probably my favorite generic RPG system. Your skills are rated as positive modifiers, and you don't have basic attributes at all. If you're really good at punching people, why do a bunch of math and add in your strength and dexterity and focus? Just be good at punching. Then it's one roll, two seconds of adding (which you can totally handle, as long as you finished third grade), and you know how bad the other guy's eye is going to swell up.

This simplified but intuitive approach to resolving conflicts is pretty awesome, and half of the reason I adore the FATE system, but really my favorite thing about FATE is the use of aspects. If you're a dynamite pilot, you might have an aspect called Like A Leaf On The Wind. When you desperately need to pull off a great flying maneuver, you invoke that aspect, spend a FATE point, and the odds of succeeding go dramatically in your favor (and you hopefully don't wind up with a giant chunk of steel impaled through your sternum). But then, you could also have some of these aspects be more negative. I had a short bear-man who had an aspect called Watch Yer Step & Hold Yer Nose, because he had a tendency to drop a deuce when he got nervous. It gave me lots of opportunities to do my Triumph the Insult Comic Dog impression, and finish sentences with, 'for me to poop on!'

In fact, for a gamer overly used to grids and feats and skill trees, FATE can be intimidating. Bulldogs! makes this a little easier by removing most of the trickier parts of FATE, but it's still a huge departure from the more technical games you've played before. The GM is going to have to do a lot of work, but it's not more work than you're used to doing, it's just different. Instead of calculating the target's armor class and subtracting out modifiers for range and dual weapons, you'll have to decide whether to compel an aspect or change zones. It feels more believable, though, and it moves a lot faster than the traditional alternative.

Bulldogs! puts the FATE system to extraordinarily good use, and as an added bonus, the author uses a readable tone and tons of examples. The illustrations throughout the book are a little cartoony, but they do an extraordinary job of bringing the setting to life. I loved just flipping through the book, and unlike some seriously dense games I've read in the past, enjoyed reading it even when I was learning the various uses of the engineering skill.

The setting, unfortunately, is where Bulldogs! breaks down a little. There's almost no background information, which can be great if you would prefer to make the entire galaxy yourself, but can suck if you wanted a ready-made universe. Since half the reason I love role-playing games is because I like to explore imaginative settings, I was a little disappointed not to get more information about the galaxy where I'm supposed to go jet-setting all over the place.

The aliens are also a bit of a disappointment. There are plenty of varieties of alien, but with only one exception, they seem to fall into two categories. Either they are basically human, but with one weird tweak, or they're animal people. There are green-skinned humanoid con-men and purple humanoid space Nazis. There are cat-people, bear-people and even slug-people. While Bulldogs! provides an excellent system for creating your own alien races, it seems that when it came to giving us imaginative races, the creators were more concerned with making a workable system, and letting the readers do all the heavy lifting.

However, I'm more than willing to overlook the shortcomings in setting material when it comes to Bulldogs!, because the game we played was just so damned much fun. We had shootouts, negotiations, kidnappings and space battles, and we did them all in the space of three hours. We enjoyed it so much that everyone agrees that we can't wait to play again. However, next time, I'm going to spend a little time working up some aliens, and maybe put together a planet with more description than 'red and dusty.'

I am not, on the other hand, going to relinquish my homicidal, incontinent teddy bear. He's just too much fun.

Pros:
Fantastic use of the FATE system
Creates believable, dimensional characters with lots of interesting details
Easy to play, once you get the hang of it
Fun to read, with great art

Cons:
Could throw you if you come in expecting D&D in space
Not much setting material, and unimaginative alien races

Noble Knight Games is all sold out of Bulldogs! (except for the d20 version, which I would avoid like it came with flesh-eating bacteria). But you can still get the game direct from the publisher's website, right here:
http://galileogames.com/bulldogs-fate/
Posted by Matt Drake at 2:16 PM

Matt, have you ever played Teenagers From Outer Space? Based on this review, you'd get a huge kick out of it, plus it's Pretty Goddamn Cheap (another bonus in this era of hardbacks and endless splatbooks).

I have switched over to boardgames these days, but in the event I would be forced at gunpoint to role-play, I'd play TFOS.