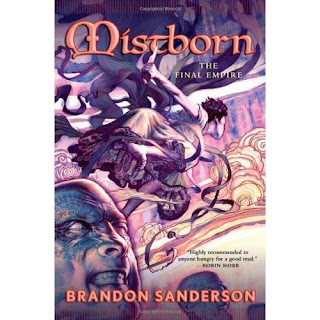 Before I start this review, I want to put this right out there - this is not a filler. I do have games now. I know, last week was all about TV shows, and while I had some good stuff in there, it wasn't games because I was out of games. But now I do have games I could write about, I'm just not writing about them because I just read these books and they are so freaking awesome that I think I will explode if I don't tell someone how freaking awesome they are. Which I just did. But I'm not done yet.

The books I just finished are called the Mistborn Trilogy. There are three of them, which you probably could have guessed, because otherwise they would have been dramatically misnamed. I also finished a fourth Mistborn book, but it is not part of the trilogy, and so I don't think I'll really mention it, but you should probably read it anyway.

If there was a college just for nerds, the Mistborn Trilogy would be required reading. It might even have a semester-long course where you discuss how all of the standard fantasy tropes we take for granted can be turned on their head and kicked in the junk while they are upside down, because that's what Mistborn does. It defies everything you've come to expect in fantasy, whether you're a fan of Moorcock or Lieber or Tolkien. It pulls absolutely no punches, and yet manages to be fun and exciting even in the face of incredible darkness.

Brandon Sanderson, the genius who wrote these books, said on his blog that he had a duel intent when writing The Final Empire (the first Mistborn novel). First, he wanted to show a world where a big damned hero made his epic quest - and then totally failed. Like, imagine Frodo putting on the ring and then getting eaten by Sauron, who went on to stomp a mudhole in anyone who thought he wasn't dead sexy. Second, he wanted to write a heist story, where a bunch of professional thieves and general ne'er-do-wells pull off an incredible scam. The result is, more than anything else, like Star Wars - but better.

Yeah, I said that. Better than Star Wars. Bold words, especially from a guy for whom Star Wars is the pinnacle of nerdvana (but only the original three movies, not those horrid prequels). The themes and excitement present in Star Wars are all over Mistborn, but they're more developed and presented with a nuance that would fly right over George Lucas's bearded head. There's the classic hero's journey, but it takes on an element of growth and maturity that is simply not present in nearly any piece of fantasy fiction.

If you're just reading books to see magic stuff happen to people just before they get cut in half, Mistborn won't disappoint. It's not just smart. It's fast and furious and fun. The world possesses a fascinating kind of magic that has incredible internal consistency of a kind rarely viewed in fantasy fiction. You can keep your fireballs where we can't see them, because in Mistborn, the magic makes sense. So does the violence, for that matter.

In fact, while the bloodshed in Mistborn isn't disturbingly over-detailed, it's still there. Peasants are unfairly slaughtered by lords. Thieves beat and kill their weaker minions. Horrible monsters tear defending soldiers apart like unwanted parking tickets. And yet we are spared having to wade through disgusting descriptions of dismemberment (if you like alliteration, you're welcome) because Sanderson focuses on the action, rather than becoming obsessed with the gore. It's there, it's just not the star of the show.

The stars of the show are the people who, you know, star in the show. From the terrified street urchin to the overconfident con man, the idealist-turned-realist nobleman to the overlooked spy, the people of the Mistborn books make the entire thing feel real. These are not just sparingly constructed character types meant to push the plot forward. These are three-dimensional people capable of insecurity and doubt, cowardice and courage, love and hate. The magic of the world feels real because the characters feel so real.

So let's say you're a fan of Martin's Game of Thrones books. I am, so I feel qualified to talk about them. Now, those books are really very adult, possibly because there are boobies in every third paragraph and rotting bodies dot the landscape until it looks like Jackson Pollock painted it with the world's most horrifying can of paint. Well, the Mistborn books manage to be just as intelligently mature than those books without giving us one single swinging pecker. Not only do we see grown-ups acting in grown-up ways, but Sanderson does it without resorting to rape scenes and pedophilia.

At first, the tone of Mistborn might seem like a book for young adults. But as you dive further into it, there is some amazing depth that will fly right past the heads of anyone not old enough to grasp a crisis of faith, gut-wrenching sacrifice, or moral ambiguity. These are not cheesy romance novels or light-hearted escapades into a black-and-white world of good and evil. Sanderson is capable of remembering that even when people are doing bad things, it's because they believe it is the right thing to do.

I haven't read books I enjoyed this much in a very long time. If you haven't read the Mistborn books, you owe it to yourself to get yourself to your local library and discover this magnificent world for yourself. And after you're done, remember one thing:

Pros:
Amazing depth and maturity, without ever resorting to Letters to Penthouse
High-flying, super-powered action scenes will keep you on the edge of your seat
Thoroughly believable characters in a thoroughly believable world
I liked it more than Tolkien

I'm a middle-aged guy who's read a LOT of fantasy and sci-fi. These books just blew me away. They really are that fresh and awesome. Matt didn't mention it, but Anderson also creates a "magic" system for the books that is totally fascinating. And the action scenes... I can absolutely visualize every action scene complete with soundtrack. THESE ARE GREAT.

Ya! Good to see Mistborn getting some publicity. Many thanks, Drake!

Any recommended minimum age vis-a-vis the violence? thanks.

The violence is exciting, but not gory. I would have let my kids read it in junior high. Really, if they're able to handle a 300-page novel, they're probably old enough to read Mistborn. They might not grasp the depth and themes, but they'll get a kick out of all the ass-kicking.

I picked up the first book based on your review. Not the first time, certainly won't be the last. Thanks Matt!

Read the first in the Way of Kings series and was impressed by Brandon's creation of such a different world.
Had looked for this one while I wait for the second WoK to come out, but could not find it easily.
Now gone ahead and ordered.
Time to give his others a try then as well, maybe even the R Jordan ones.

I just reserved the first one at my local library based on this review. I've bought games and downloaded podcasts going on your recommendations in the past (God I can't wait for Omen and Hemlock to arrive next month). Now i am very much looking froward to this one.

I've read the first mistborn, loved it! Brandon Sanderson plays Magic The Gathering at a local game shop near me and even tho I don't, I'm tempted to show up sometime cause his books rock!

The first book in an epic fantasy series, Way of Kings, rocks!

He was the one tasked with finishing Robert Jordan's Wheel of Time series after Jordan died, and the final book is now in the editing stages and such, be out next Jan. He has brought the series back into focus that RJ lost after the first 3-4 books.

There's even a recently published Mistborn RPG now, if you like it that much!

Me, I want one of the sanctioned I survived Bridge Four shirts, referencing Way of Kings.

Thanks to let me know about this books! It's really good!

Now onto Well of Ascension...

If you liked Sanderson's work, take a look at Scott Lynch, Joe Abercrombie, and J.K. Nemesin as well.