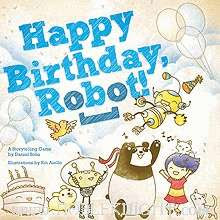 Here's a story about Robot:

Robot loves to play Mahjongg and cheat, but plays the strip variety.
Robot plays poorly because he can't stop watching strippers.
Robot lost his pants and was nude, but he didn't really care.
Robot had no real genitals, you see, and so was not ashamed.
Robot had neuticles, which made strippers scream and run like hell for the nearest exit.
This made Robot very sad, and he ran away, committing a homicidal rampage.
When the police found Robot, he was humping a jukebox and baking a cake.
Robot baked so well the police enjoyed his delicious cake and then arrested him for two minutes.
The police gave Robot pants to hide his terrifying neuticles, and he joined Styx to perform Domo Arigato.
Robot became famous and never killed again, because he could finally afford real genitalia.
Robot could finally play Mahjongg near strippers, but only Tuesdays after baking cakes.

We wrote that brilliant piece of children's fiction in just thirty minutes. Improbable, but true. We did have help, though - a book named Happy Birthday Robot. It's actually a game, and one intended to be played by fourth-graders. In fact, it has the potential to be wildly educational, when played with young children instead of perverted adults who think nudity and murder are hilarious.

Happy Birthday Robot is a delightfully illustrated game of cooperative storytelling aimed at kids who are around ten to twelve years old. Any younger, and they may have some trouble with the grammar and some of the game concepts. Any older, and you're likely to see a penis in your story. That is, of course, only a downside if you didn't want the penis there.

Happy Birthday Robot uses some fairly simple mechanics to create a cooperative storytelling game that will allow players to create short, amusing tales in less time than it would take to just come up with one on your own. And because you're brainstorming your story with a handful of other people, you never have any idea where the story is going to go. Robot might ride a unicorn, collect balloons, or poison Sally's cheese and laugh as she dies (hopefully, a room of ten-year-olds will not come up with that last one - but we totally did).

This is obviously intended as a game for children. All the pictures in the book are geared towards kids, and there are numerous notes from school teachers who have used the game to teach cooperation, storytelling, grammar and how to avoid having to teach math for two periods of the day. If I had a classroom of ten-year-olds, I would definitely make it a priority to play Happy Birthday Robot with them at least once every six weeks. I would have to split the class up into small groups, who would each write a story, but it would delightfully fun to see what they invented.

However, I do not have a classroom, a fact which benefits both myself and the gaggle of unruly children who would have been my unwitting playthings. Instead, I know grownups who love to tell insane stories. And while I have never tried to play Happy Birthday Robot with kids - and probably never will - I cannot wait to play it again with some drunk friends. And maybe my teenagers. They're the ones who think it's funny when robots kill people. I'm the one who thinks it's funny when Robot humps a jukebox.

It's been a long time since I played a game that I found so delightfully entertaining, whimsically hilarious, and flat-out silly as hell. It might be targeted at elementary schoolers, but I'm here to tell you that it's not the least bit difficult to enjoy this one with a group of punch-drunk adults. I can only hope that the game's creators are not overly offended that I have managed to put comical murders in every story we've created with Happy Birthday Robot, but I don't intend to stop.

This game is just too much fun.

Pros:
Simple, intuitive rules let you spin a quick tale fraught with hilarity
Easy enough to be grasped by third-graders, as well as people who are stupid because they drink
An entertaining exercise in imaginative improvisation
Could be rather educational

Cons:
Could be rather educational
May contain genitals (the stories, not the game itself)

Do you know about the designer's other storytelling game, Do: Pilgrims of the Flying Temple? It's pretty awesome.