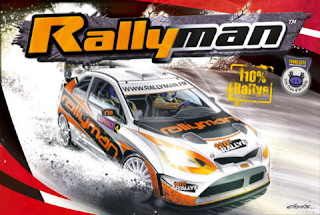 I really like racing games, but there are just not enough of them that are awesome. There are some that are very smart games, but they feel about as action-packed as a geriatric bowel movement. Then there are fast-paced romps where you have less control than a horse on roller skates. It's hard to find one that hits that sweet spot of being intellectually stimulating and high-octane kick-ass. So far, I've found exactly two.

Rallyman is not one of those two, but it sure is good-looking. It's actually a pretty smart racing game, but if you ask me, it fails in one fundamental aspect - it's not all that exciting. If Rallyman were a woman, she would be a sexy MIT grad student who just lays there and wonders what color to paint the ceiling.

Rallyman recreates the thrilling world of rally racing, which is apparently done without having other drivers on the track. You'll race, but the starts are staggered so that you rarely have to worry about running into the other racers. In the end, you'll compare your time to determine who won the race, which means that you won't be blocking the passing lane, slipping past your opponents on the inside, or gunning it to ram the leader into a ditch. You'll just drive smart and shoot for the best possible time.

It's kind of sad, really, because the basic mechanics of Rallyman are pretty damned sweet. You have a handful of dice, each representing a different gear, and you roll them to move. Every die you roll lets you move forward one space, but if three dice come up with the danger symbol, you wipe out. That part is pretty cool, combining elements of pushing your luck and planning for optimal positioning.

There are even some really clever mechanics for going around corners and hitting ramps and driving in the snow. Rallyman actually has tons of really groovy features that make me want to play it again, even as I sit here writing about a game that I know I don't much want to play again. If they had just tweaked it a little, I would have been drooling at the chance to race my friends just one more time.

Really, there are two things that would have made Rallyman awesome. One, they need to get rid of the staggered starts and let us all mix it up right out of the gate. Plus they need some rules for banging into each other and drafting and stuff. Less smart driving and more aggressive driving - that's what I need.

And two, the boards needs some fixing. They're really cool, and you can set up the four different boards to make hundreds of different tracks, from short jaunts to lengthy endurance hauls. But if you let us all take off at the same time, we need more room for cars to share space. Of course, without the first change, the second isn't needed at all, but I maintain that if you had fixed these two things, Rallyman would have been di-no-mite.

OK, now, I concede that rally racing is generally a race against the clock, not a street-racing bump-and-grind, and so in that way, the game does a good job of simulating that particular sport. Maybe I'm just the kind of adrenaline junkie who watches NASCAR to see crashes (though I do not watch NASCAR), but I think I would be horrifyingly bored by rally racing in real life, which explains why I'm not a fan of it in a board game.

Rallyman is undoubtedly a decent racing game, especially if you want to play it solo. Because really, even if you are playing against other people, you're still playing it by yourself, it just takes longer between your turns. While I can definitely appreciate the technical brilliance of Rallyman and its intriguing dice-based speed mechanic, it just comes roaring out of the box and falls flat on its face. Because when I race against other people, I want to be a speed demon in a killing machine. I don't want to be a hot science chick who is boring in the sack.

Pros:
Cool, innovative speed rules using lots of dice
Seriously easy on the eyes, with neat components
Four boards that can be used to make an enormous variety of race tracks
Lots of replay, if you like playing alone

Cons:
A racing game with no outright competition

Rallyman is one of the games you can get from Game Salute, and that's it. So if you like technical racing without much competition (which, I gather, is what rally racing is all about), you can get it right here:
DRIVE BY YOURSELF
Posted by Matt Drake at 2:22 PM

Out of interest, what are the two racing games you do like?

I too am very curious what your favorite two racing games are. (Just in case increased peer pressure has any affect here.)

Formula D (the new one, not the original, because the new one has better eye candy) and Rush N Crush. Both are smart games with lots of action.

I also like Nitro Dice, but I need to pimp it a little to make it a better game.

Road Kill Rally is where it's at. You race, you shoot the other cars with missiles and machine guns and orbital death lasers, and the whole time you're attempting to run over the pedestrians that populate the track.

It's one of our favorites.

Ooh, I need to try that. Road Kill Rally. Adding it to the list.