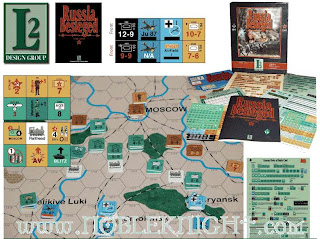 My favorite (and only) guest reviewer has once again stepped up to help me out. In yet one more display of why my old man is the coolest ever, my dad has written a review that will get me out of having to write again. I love that. So here you go, the other Mister Drake.

Russia Besieged: A Lot of Potential, Waiting for the Final Verdict

The Russian Campaign is iconic. It was one of those games that was a classic in an incredibly short time. Most of all, it was SO MUCH FUN. But all of us true-to-be wargamers knew from our first play that it wasn’t a great historical simulation. So about a year-and-a-half ago I began searching for my next purchase of the "ultimate" East Front game. I loved TRC, and since RB is a kind of "redo" of the game, but with a more historical OOB and refined rules, it seemed to fit the itch. After several months looking at several games, I bought Russia Besieged. Unfortunately, I live in Reno, and it’s a desert for wargamers. I had to wait over a year till I visited family to finally get to play it. Here’s what I’ve discovered about the game.

The Map:
The map is large, with larger hexes, but essentially the same map as Russian Campaign. The one great difference between the old and the new is how the rivers are placed. In TRC they run through the center of the hex, which I never really appreciated, but in RB they run along the hexside. I think this makes a better simulation. While ZOC extend across rivers, units are not required to attack across a river while in the enemy ZOC. This works out well. The map artwork is a bit bland, but much better than TRC. All in all, I like the map. But I oh-so-wish they would have mounted the map, though I realize it would have raised the price of the game. We had the game on the table for most of two days and it never did lie flat. This is one of my minor disappointments in the game.

Components:
Russia Besieged is beautiful. If you loved TRC, then you’ll be even more enamored with RB. The counters, like the hexes, are larger, so they’re easier to handle and see for those of us who were veteran gamers when TRC came out. But the best improvement in the counters is that they’re almost all back-printed, so you can take step losses in combat. This is a tremendous enhancement for historical simulation. As an aside, there are a few Field Marshal counters that are missing in the counter mix, and as you read through the rules they tell you that they'll be available in the expansion, which it seems is now unavailable. (This is the SECOND edition! How can they be missing still?) However, the game charts are absolutely top-notch. They’re large, easy to read, and laminated. The OOB charts are especially large and beautiful. On the not-so-happy side, for some odd reason the Axis infantry counters are dark green, and the combat/movement factors are in black, so they don’t stand out well at all.

Rules:
If you’re familiar with TRC then you’ll slide right into the RB rules. But be prepared. This is NOT a fifth edition of Russian Campaign. The map is basically the same, the counters are fairly similar, but otherwise it’s an all-new game. There a LOT more rules here. They’re not as well written as the old game, so they may take some focused reading, but all veteran gamers will master them the first time through. There are some nagging minutia that I don’t think are at all necessary, but the designers were obviously trying to make a better historical simulation. In many ways they succeeded, but some of the small stuff is not important to game play.

The air rules are EXCELLENT. Stukas no longer fly from the Army Group HQs, but from airfields. During an impulse the airfields can either support a bomber run, or they can move to a new location. Also, the Germans don’t have just three Stukas with varying strength. Now they have NINE Stukas in ’41, each allowing the German player to raise the combat odds by one. As the game progresses the Germans receive fewer aircraft each year. And for the final touch, the Russians have aircraft arriving in 1943. I love these new air rules.

But then there’s the weather chart. This is where I have to voice my greatest disappointment with the game. Actually, a cool aspect of RB is that the German player rolls for weather for each month – no more snow in April, no more clear weather in December. At face value this is a substantial and excellent improvement. So why the upset? As we played the game we found the German player would roll First Impulse LT MUD; Second Impulse SNOW. He’d then move light mud, then snow, and then I’d move light mud, after he’d just moved snow. This was REALLY quirky. I have no idea how they can get around this, but it’s just too weird for the Germans to move in snow, hunker down in their winter defenses, and then the Russians move light mud and get to slam them hard. In Sep/Oct the situation can be CLEAR/MUD, which also allows for some shady moves by the Russians.

I’ve read the comments of several who say they don’t care for RB because it doesn’t have any scenarios. I suppose that if you really played scenarios it might be an issue, but for myself, I bought The Russian Campaign when it first came out in 1978, and of all my games that don’t require scenarios to play (ASL, Up Front, CoH, etc) I’ve played TRC the greatest number of times, and every time it was the campaign game. So for me, the scenarios are irrelevant. And the positive side of not having scenarios is that the gameboard doesn’t have all those vari-colored dots that definitely detract from the attractiveness of the map.

Game Play:
This is a much larger game - not just in the size of the map and number of counters - than TRC. It plays with the feel of a much larger scope, so that it feels like a mini-monster game (if that makes any sense). If you enjoyed the old game, then you should easily transfer your affections to RB. The new air rules allow the Germans much more flexibility, while the new Oil rules impact the way they bring in armor replacements. It’s a very fun game to play, but in my one play it didn’t end up at all historically accurate.

Conclusion:
So far I’ve mostly had good things to say about Russia Besieged. But when we got into game play - and I have to disclose that I’ve only played it once - I was hugely disappointed. In the first two turns of 1941 I found the game playing out about the same as TRC. The Russians were taking a pounding, having a difficult time plugging the holes in their lines, and having trouble slowing down the Germans. Kind of a déjà vu. But then the game began to look a lot different. When the Russians brought in their September thru December reinforcements, it was a whole new game. In our one game, the Germans lost due to a Russian Automatic Victory (sudden death) at the end of 1942 because the Germans just could not take 16 Major cities. After just one play I don’t know if the German player just had bad strategy (he was trying to get 10-1 as often as possible) or if the game is flawed in favoring the Russians.

Admittedly, and expectantly, I need to get in more plays. Russia Besieged is a beautiful game with some excellent improvements over Russian Campaign. It SHOULD play well, but in my one play it was a disappointment, although as the Russian player an especially fun one.

If you're a grognard like my dad, you probably realized that Russia Besieged is not an easy game to lay your hands on. It's sold out a lot. But if you do want it, there is one place you can find it - and even save a few bucks! That's right, Noble Knight Games: