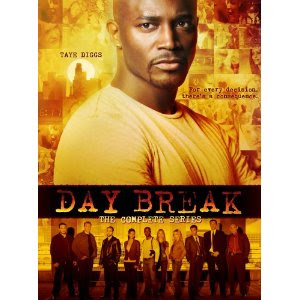 There are times when I want to watch a show about the characters, where I'm thinking about what motivates these people and why they do what they do and how they interact with each other and, if it's on HBO, which ones will show me their boobs before the credits roll. But sometimes I just want to see a cool story with lots of guns and punches.

Day Break is firmly in that second category, an exciting thriller of a TV show that gives me just about everything I want out of quality programming. This is a show with good acting, believable characters, a great story, and Moon Bloodgood in her underwear. In fact, Day Break is the kind of show that makes me wonder why movies even bother. The entire show is 13 episodes, and is completely finished when it's over. It's like a carnival ride, but without the smell of puke and dirty urinals.

Now, back in the dark ages, we had to tune in every week to watch the latest episode, and I always forgot what happened last time, and needed the 'previously, on whatever show has you totally hooked right now' that starts off episodic TV shows these days. But thanks to the wonders of Netflix, now you can watch all 13 episodes in a row, with quick breaks for important stuff like peeing and sleeping and calling in sick to work.

Day Break follows Detective Brett Hopper, a cop who has to solve a crime. Right off the bat, half of you just went to sleep. Police dramas might be the most boring concept on TV, and have been for decades. But don't worry - this is not one of those boring police procedurals where the bad guy gets caught every week after the cops use good old-fashioned police work. There's no procedure to this one at all, especially because Hopper spends the entire show running from the cops (and getting caught on a regular basis).

See, Detective Hopper has been framed for killing an assistant DA. The show starts off with him getting arrested, protesting his innocence and getting locked up anyway, then getting dragged out of his cell and ordered to confess to the crime - right after he watches his girlfriend get shot and killed on DVD. This would normally be a very bad day, but Hopper finds out the next morning that it could be worse. It could be that he has to do the entire thing again.

Every day, Hopper wakes up at 6:17, and it's the same day. The traffic report is the same, the bird on the windowsill, the joggers running past the window. And worst of all, Hopper has no idea why he's stuck. He tries to run - and gets his partner killed. He tries to solve the crime - and gets other people killed. In fact, over the course of the show, he shoots the same pair of bad guys at least a half-dozen times, and sees the deaths of his friends and families so often that it starts to make him crazy.

And still he has to do it again. Every day he gets a little closer to figuring out who framed him and who committed the crime, and it's fantastic fun to watch. He'll hold a bad guy at gunpoint one day, and if that doesn't work, try smooth-talking the next day. He'll learn all kinds of stuff about which bad guys are doing what - but he can't really prove anything, especially when the informant squealed on a day that only Hopper remembers.

Where most TV these days tries to be innovative by being just like every other show on TV, Day Break tried something that just wasn't being done at the time. It was a 13-episode mid-season replacement that had a clear starting point and finish line, and didn't pretend that everything had to be resolved every week. Because of the crazy reset-button nature of the show, they could kill anyone - and they did, over and over and over.

Unfortunately, Day Break was a network TV show. ABC aired the damned thing for six weeks, and then pulled the plug before it was done. But luckily for those of us in the modern world of streaming television, you now have the chance to see the entire series, start to finish, and you don't have to stop unless you really need to peel your sorry ass off the couch to let the dog outside. And as long as you pay your Netflix bill, you also don't have to put up with some crappy network deciding to cancel halfway through.

Day Break is an incredibly fun show with a high-action, pulp feel to it. It reminds us that HBO doesn't have the corner on awesome TV - though ABC reminded us that there's a really good reason you shouldn't watch network television. Nothing like living up to their name - I'm pretty sure ABC really stands for Already Been Canceled.
Posted by Matt Drake at 2:52 PM

I was pleased with this one up until the ending, then I felt a little wanting when the dust settled. All in all not too shabby.

Don't know if this one's on the agenda or not, but Flash Forward was another good on-Netflix series I watched around the same time.

Flash Forward was cool, but the ending sucked. If it had been renewed for another season, I would have been delighted, but as it was, the ending was just an unresolved cliffhanger.

I loved the ending to Day Break, though.