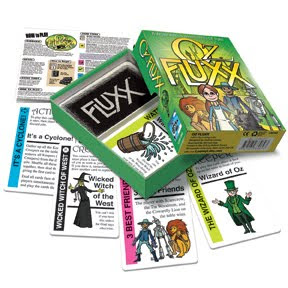 It is becoming increasingly difficult to come up with new things to say about updated versions of Fluxx. It seems that once or twice a year, Looney Labs comes out with a new kind of Fluxx that is compatible with all the previous versions. Whether it's Martian Fluxx, Stoner Fluxx, or Increasingly Irrelevant Fluxx, Looney Labs now has more members in the Fluxx family than Angelina Jolie has children (I am actually guessing - I have no idea how many kids Angelina Jolie has).

The latest Fluxx theme is another in a long line of things that might remind you of smoking marijuana. It's called Oz Fluxx, which seems pretty innocuous, until you remember all your friends who said that if you turned off the sound on the TV and played Pink Floyd's 'The Wall' while you smoked a bowl and watched Wizard of Oz, the music went with what you were watching on the screen. Only nobody ever actually tries that, they just talk about it like it was some kind of pointless urban myth. Seriously, for all the talking, I have never met one person who did that.

Oz Fluxx is really just Fluxx, but with different cards. And some of the cards do stuff about other cards, assuming you've got the right cards together. Mostly it's keepers that let you discard creepers, like the tin woodsman who can get rid of mean trees, or the bucket of water you can use to discard the Wicked Witch of the West. It's all story-themed, of course, so having the scarecrow and Toto is worth about as much as a small, yippy dog.

The goals also riff off the movie, like Future Leaders of Oz where you have to have scarecrow and tin man, or Next Stop Kansas that requires you to have the flying house and, well, Kansas. It's not exactly fresh or original, but if you really dig Judy Garland and technicolor, then you might love it. You might also prefer the company of gentlemen. Not that there's anything wrong with that.

In terms of game play, Oz Fluxx is better than some Fluxxes, and worse than others. It's no Martian Fluxx, my favorite of the batch, but I like it better than the original. Somehow, even if it's still the same game, simply having a theme makes it more enjoyable. Even the Wizard of Oz makes a better theme than space cookies.

It does not make better art. But then, in all fairness, most of the Fluxx games have perfectly dreadful art. Oz Fluxx is just staying true to form by having mediocre art in some places, cute art in others, and kind of crappy art everywhere else.

But let's face it, if you're a fan of Fluxx, you'll probably pick up this one whatever the art is like. It's kind of a shame that there's not more attempt made to make Oz Fluxx smarter than it could be, the way Martian Fluxx or Zombie Fluxx actually gave you a theme that made the game better. But at least it's not Dirty Underwear Fluxx, because the only redeeming feature of that game would be that the art would look nothing like its inspiration source.

Pros:
I kind of like The Wizard of Oz
It's Fluxx

Cons:
Doesn't really add much in terms of game play
It's Fluxx

One huge upside to Fluxx is that it's an affordable game that takes like two minutes to teach. If you want Oz Fluxx, you can get it cheap direct from Looney Labs:
http://store.looneylabs.com/Oz-Fluxx
Posted by Matt Drake at 8:35 PM