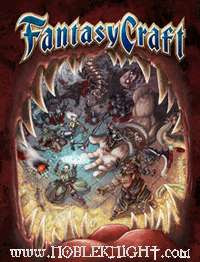 The wonderful thing about role-playing games is that there are so many different kinds. There are the games with almost no rules, where everything is about telling a story. There are some played with cards, and some played with poker chips. There are even some with a bunch of rules and no dice. Then there is the kind that involves one of you pretending to be a burglar and the other pretending to be the surprised housewife, but those are a little outside the scope of a game review site, unless that site frequently reviews water-based lubricant, and I do not.

My least favorite kind, based entirely on personal preference, is the kind where there are 400 pages of rules and no background. The most obvious example of this kind of game is Dungeons & Dragons, except for the very earliest version which was printed on notebook paper using a steno machine and stored in a sandwich bag. I loved the Forgotten Realms setting, but never could bring myself to learn all those rules. And when they came out with 3rd edition, there were so many rules that you needed software to help you create your characters (that's actually true - the book came with a CD that would make your half-orc monks and gnome clerics).

So it's not a big surprise that I don't much care for Fantasy Craft, because it is also 400 pages of rules with no background material. In fact, it's very similar to D&D 3E, to the point that you can actually use our old modules and monster manuals with Fantasy Craft. There's a little bit of conversion to do, but frankly, if you're committed enough to make a character for this game, you've probably got the free time to translate your kobolds.

The thing to consider with Fantasy Craft, however, is that unlike the biggest RPG ever made, the book should be considered more as a toolbox than a rule book. There are lots and lots and lots of rules (I could add more 'and lots' to try and convey how many rules there are, but I think three times is already two times too many). But those rules can be pretty easily discarded, modified or plugged in as needed.

For example, there are oodles of different races from which to choose, ranging from the standard (human, elf or dwarf) to the really wild (mostly-a-dragon, automaton, and walking tree). Some of those could be problematic in a cramped dungeon setting, of course - how would you get a giant walking shrubbery into a four-foot crawlspace? Those options are there, though, so that you can choose the kind of game you want to play. Mix-and-match your specialty and your character class to create just the kind of guy you want to play. The system is wildly flexible, and will let you create anything from an ogre assassin to a midget barbarian with a passion for model trains.

Unfortunately, this flexibility comes with a price, and that price is that it will take you a really long time to make a character, after which you will know beyond a shadow of a doubt that you did something wrong. I made three different characters, and they were all about as much fun as a tooth extraction. They were cool characters, though. Corner me some time at a convention and I'll tell you all about them, in so much detail that you will make up an absolutely absurd excuse to get away from me, like telling me that your water just broke and you have to get to the hospital before your baby is born in the dealer's hall (this can be difficult to believe if you are male).

The rules options just keep coming. You can play with careful 5-foot movements and 1-inch grids covered with miniatures, or you can sit in your living room with TV trays and let it all happen in your mind. Happily, rules for attacks of opportunity are completely missing, which means fighting is a lot less confusing. It also means one guy can't stand there and hit 47 skeletons in one turn just because they ran past him without asking permission.

Combat also includes possibly the best thing about Fantasy Craft - no more hit points. You've got vitality, and you've got wounds. Wounds are pretty much set from the beginning of the game, but vitality can go up every level. Wounds represents the actual punishment your body can take, and vitality represents how good you are at dodging damage. So initial damage will have to get through your vitality first, and your vitality also heals between battles. This is good news, because it means you don't have to stop after three rooms of a dungeon and barricade the trolls' bathroom door so that everyone can get eight hours of sleep before completing your violent home invasions.

There are actually a bunch more examples of cool modular rules, if I were to keep going - but the downside to me is that they're there. I really prefer a leaner game, one where I can create my magical elf warrior in ten minutes and entire brawls can be played out in less time than it would take you to actually stab somebody. Fantasy Craft isn't built for this kind of gamer, which means it doesn't really appeal to me.

However, just because it's not my bag does not mean I can't see the quality. This is a meticulously well-built book, and it's got a considerable following. It's also well-supported, with lots of expansions and modules and fan-created add-ons. It really is a very robust set of tools meant to allow you to play exactly the kind of fantasy game you like, whether you prefer gritty games with gruesome weapons or high adventure with magical blunderbusses. If you take the time to weed through and pick the rules you want, and dump the ones you don't, you'll have a campaign and a game that is so personal, it will smell like your armpits.

Fantasy Craft is not a game for pansies who hate reading lots of rules (which includes, for instance, me), but it is a very well-designed game that will provide for an incredible amount of flexibility. It will make you work more than the drive-by titles I prefer, but if you want to play just exactly the kind of fantasy game you want to play, there are not a whole lot of games that do it better.

Pros:
Super modular rules
Well-honed, well-designed and very flexible
Great art and lots of options
Compatible with all those D&D books you haven't given to your kids yet

Cons:
400 pages of rules is an awful lot of rules
Rather involved with a fair amount of accounting

If you like all the new D&D versions, you would probably love Fantasy Craft, especially if you're looking to use it as a blunt weapon (because, you know, it's really big). You can pick it up at Noble Knight Games, and even save a bunch of money:
CRAFTY
(For some seriously impressive savings, do a search for the first printing, which you can get from Noble Knight for fifteen bucks. Not bad for a 50-dollar book!)
Posted by Matt Drake at 2:07 PM

Too many rules definitely kill the fun of a game.
I'm going to give this a try anyway.
Hopefully there's enough more to the game to make it interesting for me.

Oh, there's a lot to the game. Like I said, there is a TON of flexibility. I just don't like a lot of rules, so it's not my cup of tea, but I can't deny that it's a very effective gaming system.

The only thing I'd add is that pretty much all RPGs have rule 0 - Change things any way you want.

It just sounds like this book keeps saying it over and over again to make sure it's always remembered.

Not saying it's a bad thing to repeat it, just saying that it's nothing remotely new since it's one of the things D&D established early on for itself too - still does.

As with all RPGs, the real selling point for me is: Are there enough players in my area that I could get a game going?

RPGs are kind of strange like that - the game quality is secondary to the group availability.

OK, yes, all RPGs have the 'throw out what you don't want' rule, but Fantasy Craft actually makes the rules thoroughly modular, making it easy to discard the pieces you dislike. And it doesn't repeat the mantra a whole bunch of times, it just presents you with rules that would be easy to punch out and assemble into the game you want to play, and then shows you different ways to use them.

Sure, other games say you can chuck the parts you don't want, but they don't make it easy, and many times, tearing out a piece of the rules will get you a game that doesn't work any more. Fantasy Craft was specifically designed to work with a basic core, plus whichever rules you think will get the job done.

Like I said, I can see that it's a very good game. I just don't much care it, and that is 100% personal preference. I prefer simple and streamlined, and I love games where the system is intrinsically married to the setting. It's a very difficult thing to pull off, and it's very rare to find, but I'm reviewing one next week that does it perfectly.

This has become my go-to game for d20 based fantasy. However, I laughed my head off at the review. It would indeed make a decent bludgeoning weapon and there are a LOT of rules.

Great review! And, thanks for reviewing an RPG.