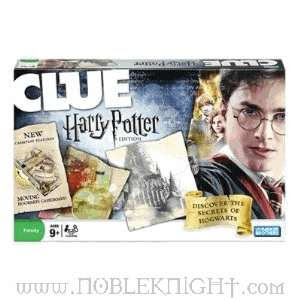 Having a fire take out every game I own really sucked, mostly because it left me with a real shortage of review copies. Not only that, but when I go to play a game, I can't just pick up Bootleggers or Risk Legacy or Nightfall, and I haven't been totally dazzled with a game since the fire. Sure, there were a few I liked, but none of the new games I've accumulated since December can compare to Nostra City or Claustrophobia for sheer 'holy crap I want to play that right now' factor.

So Monday night I got a bug up my ass and decided to go to the thrift store, because by God I wanted to play something even if it sucked. And as I walked the aisles, stepping carefully around, over and sometimes on other people's small children, I came across something that amazed me - a copy of Clue: Harry Potter that was still in the shrink-wrap. It was only five bucks, which is about what I would be likely to pay for the game if I was buying it new. But it was in a thrift store and it was in the shrink wrap, which practically obligated me to buy it. And that explains why I'm using this perfectly good website to talk about a themed retread of a boring old game.

First off, Clue is near the top of the charts when it comes to games I really don't want to play. It may have been an interesting deduction game when I was a dumb kid, but these days, it just bores the socks off me. You wander around, completely slaved to the dice, and then if you ever do manage to get to a room somewhere, you get to play a lame 'show me your card' game to see if you can check off one more box. Hopefully someone at the table will be smart enough to figure out what's in the envelope before you get so distracted that you end up falling asleep at the table.

So why did I buy Harry Potter Clue? Well, it was flashy, it was in a thrift store, and it was still in the shrink wrap. That doesn't explain why I played it, though (and really provides a totally ridiculous reason for having bought it). I played it because it had thematic upgrades that seemed really cool at the time.

And sometimes, when you turn the wheel, a dark sign might appear. This is not to be confused with trying to read road signs at night when the streetlights are blown. Those are normal signs, but just really dark. No, a dark sign is when a snake crawls through somebody's head, which I think we can all agree would be pretty bad regardless of whether or not the streetlights were on. And when you see the dark sign, something bad is going to happen. To find out what that bad thing is, you have to all clutch your wands (or pillows, if you're girls), and draw a card.

The dark sign cards make all kinds of things happen. Like the boys might find a troll in the crapper, or all the girls might accidentally eat puking pastilles. This is something evil Lord Voldemort was fond of doing to plague the living - make them mildly nauseous. But if you have the Weasley Twins as allies, you don't have to throw up. Everybody else, though, is going to lose house points for blowing chunks all over Professor Snape.

This is one part of Clue: Harry Potter that was pretty darned cool - player elimination. There are all these special spaces on the board where you can pick up help cards, like spells and potions and happy magical friends. And you will need them, because those dark sign cards will eventually send everyone to detention unless they're protected by Hagrid or Fawkes the Burning Chicken. When you lose all your house points, you're just plain out of the game. And since it's Clue, you still have to stick around and show your cards to people. You have to play, and you can't even win any more.

On their own, these dark sign events are kind of weak. They're just arbitrarily random misdeeds that will have you running away from man-eating vegetables and writing on your hand with magic pens (unlike my daughter, who writes on her hand with a real pen, until she looks like she spends every Saturday at the henna tattoo parlor). But combined with Clue, they make you hurry. And if there's one thing Clue needs, it's a shot of haul-ass.

Ultimately, Harry Potter Clue works for me because I like Harry Potter. It's a weak reason, too, because it's still Clue. But I like the changing board and the race against time provided by the dark sign cards. I get to play Neville Longbottom, who is definitely not my favorite Harry Potter character, but who is still cooler than Harry Potter because Harry Potter is a whiny bitch. The board is pretty, the theme is one I enjoy, and the gimmicks are surprisingly cool. So what if it's Clue. It's fun, and that's why I play games.

Pros:
Harry Potter (and you don't have to be Harry Potter)
A few cool gimmicks that really work
It cost me five bucks at the thrift store

If you want to play Harry Potter Clue with your kids who love Harry Potter (assuming they still live in your house, because Harry Potter is so 2001), you should run over to Noble Knight Games and pick up a copy:
FETCH ME A PORTKEY
Posted by Matt Drake at 3:00 PM