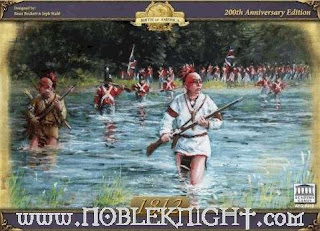 Once, a long time ago, there was a war. On one side were the Americans, who were pissed off at the British and more than a little land-grabby. On the other side were the Canadians, who were still pretty much British, but they were also Americans because North America is a big place, and we just call people from the United States 'Americans' because it sounds kind of stupid to call ourselves 'United Statesians'. Plus there were Indians who were not from India at all, and therefore had possibly the least accurate nickname ever assigned to an ethnic group. That might have explained why they were so pissed, but then, the fact that the United Statesians kept taking their land might also have had them a little riled up.

Anyway, because nobody was present who was very creative, they could not come up with a name for their war. So they just called it the War of 1812, which was only accurate for the beginning of the war, which actually took place largely in 1813-14 and ended in 1815, thus making it a rather poorly named historical event. And then it went for a while, and a lot of people got killed, and then since both sides were getting their asses kicked, both declared that they had won and they quit and went back to pretty much the way things had been before the war started, except that the United States thought it might be a good idea to not invade Canada any more.

This was such an exciting event that someone made a game out of it. And to make sure that the game was not overly confused, they called it 1812, which clearly references the war that took place, for the most part, in years other than 1812. In this exciting game, both sides of the war will punch each other in the groin until the war ends, and then the side that took more stuff from the other side will declare that they won and then everybody will just give everything back and then we'll get William Shatner.

This sounds like it should be a war game, especially since it is a game about war. But when you think, 'war game,' you think of a game where you spend three days punching out tiny cardboard squares and organizing them in little trays before you devote the next six months to reading the complicated rules that are presented in type small enough to blind you. Instead, 1812 uses brightly colored wooden cubes, and the rules can be read on a smoke break, unless you don't smoke, in which case you can just take a normal break and not smoke at all.

What it is not is a game where one side is going to completely overrun the other side and take the entire world for himself until the guy who turtled in Australia the whole time gets enough cards to turn them in for extra troops. Instead, it's a back-and-forth game where the Canadians will grab Detroit, then the Americans will grab Queenston, then the Canadians will take back Queenston and the Americans will take back Detroit. It will almost always come down to winning by one or two points, because 1812 does a remarkable job of recreating a war where both sides pretty much just kept swapping cities until everyone figured out that nobody was really enjoying themselves very much, because the main difference between New York and Quebec is that their bacon is a pizza topping.

There isn't a whole lot in 1812 that will make you say, 'Hey! I never saw that before!' You've got cards that you play to say how many armies you can move, and you've got crazy dice with wacky symbols that tell you if your guys got killed or just ran away before someone could catch them (apparently there was a great deal of running away in the War of 1812, probably because they were confused about the dates, seeing as they were fighting the War of 1812, but it was like 1814). These are elements that I've seen several times in games about killing people.

But what is original to 1812 is how very well the parts of the game work together to create a really fun game. It's got loads of careful planning, using the right cards, timing your big moves and otherwise doing awesome stuff. Turns go very quickly, so even in a five-player game, you're not going to get bored. Plus if the British Regulars are moving out of Montreal, they can take the Canadian Militia with them, and then both players will be rolling dice and attacking and stuff. In fact, exploiting the ability to move allied troops out of turn is critical if you want to be successful playing 1812.

There are not many games about war that my wife will actually want to play, but when she saw this one (and saw how pretty it was), she wanted to try it. It helps that she's an historian, but even an expert on wars could be bored by a crappy war game. Not 1812, though - she really loved the game, and told me she would like to play again. And this is a woman who would rather do the laundry than play most any other war game.

Perhaps my wife enjoyed 1812 as much as I did because of her background in history. Perhaps she liked it because of the light rules and fast play. Maybe she was just excited because she won by playing much better than I did. But whatever the case, the fact is, 1812 is a war game that a wargamer could play with a normal person and both people could have a lot of fun. The rules are fairly short, especially considering that half the book is devoted to the history of the slightly misnamed War of 1812.

Cons:
Can feel a little awkward with 3 or 4 players

I think 1812 is a heck of a lot of fun. It's a fairly accurate depiction of an actual war, and yet it's not dry or hard to play or long or anything. You can pick it up at Noble Knight Games, where you can get it for a good chunk off retail:
BLAME CANADA
Posted by Matt Drake at 2:16 PM

I haven't read the rest of the article yet, but I've decided that your entire life was exceptionally well worth living, due simply to the 2nd paragraph. Yep, it's just that good.

Thies review, sir, just made my day. Fantastic sense of humour, keep it up! And you've convinced me of buying the game :)