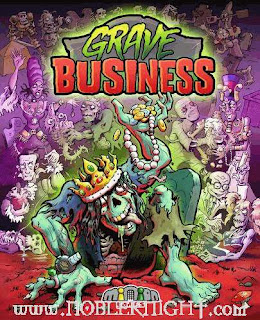 If you have an office job, you're familiar with the concept of working with zombies. Lots of us just wander mindlessly through the day, drudging from one menial task to the next before we photocopy our butts (that can't be just me).

But if you play Grave Business, your co-workers will be actual zombies. Not office drones in need of a caffeine fix, either - I mean walking, groaning, reanimated dead people. Which would be bad for morale, except that the only people who would be around to complain are also dead.

Each player is an enterprising necromancer looking for body parts and hidden treasure in an incredibly overpopulated graveyard. If you can find all the parts of your company's original CEO and put him back together, you won't even need the treasures and stuff, because that old dude will give you a beach house in Maui just for sewing his man parts back on.

So every turn, you'll send your zombies to work, digging up the graveyard. The contents of the graveyard change every turn, but will almost always include lots of pieces of dead people, which is convenient for a guy who can turn body parts into employees. Which is you.

But the other players are your competition, and they also want to dig up the original boss man, and build their own zombies, and collect their own priceless artifacts that they can pawn for quick cash. So you have to place your zombies, face-down so that nobody knows how efficient they are, and then after everyone has put out their brain-dead drones, you flip over the zombies and see who has put the best zombies to work on each particular grave.

A little explanation regarding the nature of the graveyard is in order here. So far, this just sounds like a great way to make a boring work day a little more lively, which is ironic since you're using dead people. But really, you're placing influence pieces on a grid, then calculating your combined influence for each space to see if you can claim the tile in question. If you were hoping for some brain-eating or a thematic narrative, go play Last Night on Earth. Grave Business is not that kind of game.

It is the kind of game that would appeal to people who like to place workers on spaces and calculate score totals. That doesn't really appeal to everyone, and to be honest, it doesn't always appeal to me. If Grave Business was a longer game, I would really hate it, but as an intellectual exercise with some hilarious art, it's actually pretty cool. It takes about half an hour to run through the whole thing, and then you're done. You probably wouldn't plan your whole evening around playing this game, but there's no reason not to break it out if you just need to enjoy half an hour with your family before your teenage son disappears to go watch TV in his room and your daughter returns to her own cave to spend the night texting her friends.

There are a few small problems with the game, but these should go away after you play it a couple times. For instance, you can send a zombie to go attack another zombie, but until you've got some plays under your belt, that particular action can seem counterproductive (and it is, if you're not careful about when you do it). But if you do it correctly, you can find out where your opponent is keeping his big hitter and even kick him off the board for this turn.

Another potential problem is that it is absolutely critical to build more zombies as fast as you can, even if they're not particularly effective. This is really only a problem for the first game, when people might not realize how important it is to have more drooling idiots working for them. At any rate, people who have played a couple times are going to have a huge advantage over the new people, which could make those new people really hate the game when it seems like they just took an undead clobbering.

If I gave numeric scores to games, I would give Grave Business a number of some sort. But I don't. So I will just say that it's not a particularly fascinating game, not overly deep, but it is enjoyable. It play pretty fast, and the art is done by one of my favorite cartoon illustrators, and really makes it more fun. You can play it with family (as long as they're OK with cartoon bloodshed), and exercise some brain muscles in the process.

And it's good to exercise brain muscles, because God knows your job as an office zombie isn't going to keep the ol' synapses firing at full speed.

Pros:
Like push-ups for your brain
Great art that makes it more fun to play
Will appeal a lot to fans of European-style games


Cons:
Little to no story
A little dry, for a game about zombies

If Grave Business sounds like your kind of game, you can save some money and pick it up at Noble Knight Games:
WALKING DEAD SUCK AT CONFERENCE CALLS
Posted by Matt Drake at 3:08 PM