Board Game Review - My Happy Farm 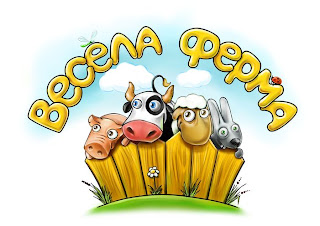 When I was a kid, I always thought the country between Eastern Europe and Russia was called The Ukraine. Like there was more than one, so they had to call it out with an article that would designate theirs as the original. 'Sure,' they would tell their friends, 'you could visit some other Ukraine, but you'll never find one as good as The Ukraine. It's The Best.'

Turns out, the country is just called Ukraine. There's no article. I guess that's what you get for learning geography from a 1968 copy of Risk. And I know this for sure now, because a couple weeks ago, some people who live there sent me a game called My Happy Farm (at least, that's what it says on BGG. The cover of the game uses what I assume are Cyrillic letters, so it kind of looks like the game is called Becena Pepma, which is obviously wrong (well, it's wrong to me, but maybe if you speak Ukrainian - which I'm pretty sure is just Russian - that means My Happy Farm)).

My Happy Farm is clearly a European game. The goal is to plant crops and feed farm animals. This, combined with the fact that it was created in Europe, make it a European game. You cannot kill your farm animals, not even for their delicious meat. You just fatten them up and show them off to the neighbors. You're obviously not breeding them for the money, because you can get richer than hell just selling turnips (coincidentally, this is also a great way to make money in Animal Crossing, a game in which I had to rename my character Rockefeller Von Moneybanks, the turnip magnate).

The purpose of making all this money is to buy seeds that you can plant. Then you grow those seeds and harvest the plants. Then you feed those plants to your animals, only you have very picky animals who would rather wait six years for a meal than eat wheat and carrots in the wrong proportions. Basically, you trade these veggies for a feeding card that you slap on your animal, who will get fatter and then be happy with you.

There's a lot of stuff in My Happy Farm that will be relatively old-hat for serious fans of games where you don't punch anyone. You have a limited number of options on your turn, and there's always more you wish you could do. There is absolutely no interaction of any kind beyond racing to get the best cards to feed your four-legged friends. You trade one resource (money) for another resource (seeds) which you turn into a different resource (vegetables) in order to procure victory points (in the form of overweight sheep).

A few things make this moderately more interesting than organizing the crisper drawers in the bottom of the refrigerator. The art, for example, is almost painfully cute. I mean like Hello Kitty meets the Smurfs cute. You'll want to feed your pig just because he looks so adorable when he's smiling (as opposed to real life, where pigs are pretty gross-looking and you feed them so that one day they will be bacon).

And you really will have to use your head if you decide to play My Happy Farm. You can't afford to waste your actions, so you'll need to plan several turns ahead and make every action count. A happy farm is an efficient farm, after all. Your storage barn can only hold six vegetables (because you suck at building barns), so you don't want to fill it up with clover when your cow really wants wheat.

Just make sure that by the end of the game, you've fed all your animals. Because if you don't, the hungry ones (the ones who have been starving for ten years like bovine versions of Mahatma Ghandi) will get angry and leave you, an option that I can safely assume would be greatly coveted by most factory farm animals in America. Apparently, in Ukraine, farm animals choose their people, and come and go any time they want. Where I'm from, farm animals are food, and as much as I would love to keep them and love them and pick up their endless piles of poop, they are made out of yummy meat. Killing them not only nets me some tasty short ribs, but it means I don't have to follow them around the yard with a plastic bag and a pooper scooper.

For me, My Happy Farm is the kind of game where I would rather stab a fork into the back of my hand than spend a whole day playing. However, my daughter absolutely loved it, and forbade me from giving it a bad review. So if you're a curmudgeonly old man who prefers games where people die, forget it, but if you're a silly teenage girl who likes to feed your cute animals because of how much you love them, then you might think this dry little game is the best thing ever. Of course, there's also the middle ground - the guy who just likes European-style games and doesn't mind that he doesn't actually have to interact with the other players. Those people might get a kick out of My Happy Farm.

Cons:
No interaction of any kind
Very, very dry

Do you know where you can buy games made in Ukraine? That's right, Ukraine. Here's the website for the game, all in Ukrainian (which, I suspect, is Russian):
http://boardgame.com.ua/
Posted by Matt Drake at 2:56 PM

Ukrainian is NOT Russian. It's totally different language. Do English and Spanish seem the same to you as well???

Wait, English and Spanish aren't the same language? Man, have I been doing it wrong.