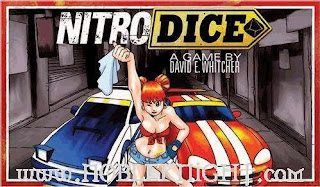 I am not a fan of professional car racing, as a sport, though I am more than willing to concede that it could be pretty cool. But I might be a lot more willing to sit through a few laps of NASCAR if a giant indicator on top of the vehicle told me how fast the car was going at a glance. Of course, in the case of NASCAR, I'm pretty sure they go the same speed, running in circles, for about three hours, and then someone crashes and takes out spectators with flying debris. So the numbers wouldn't be that interesting, because for three hours you're looking at 180, and then all of a sudden, a big 0. And maybe fire.

In Nitro Dice, though, your car shows your speed the whole time, so you can just take a quick gander at the table and tell exactly how fast everyone is going. And the reason this is so easy is that instead of cars, you drive ten-sided dice around the track as fast as you can. Which is a pretty crazy idea, because dice don't even have wheels on them.

Nitro Dice has a bunch of really cool ideas. For starters, all the cards you use are track sections that either go straight, turn right, or turn left. You don't just play with these cards, either. You build your track out of them, which means you can build just about any track you want. If you build a seriously humongous track, you might have to buy a second deck, but if you build a track that big, the game is going to take four days and everyone will hate you for asking them to play.

Every racing game has to have some way to simulate handling and speed and stuff, and in Nitro Dice, your cards are your racing prowess. Every time you enter a new piece of track, you have to discard a card that matches that piece of track or take damage to your car as you skid out of control. Want to juice it for a quick start? Discard a card. Change lanes? Discard a card. Slam on the brakes so you don't pile into the back of the guy in front of you? Discard a card.

This works pretty well, because at low speeds, you won't have as many chances to use your cards, and at high speeds, you better be really careful about the cards you dump. On the other hand, you could spend too long mulling over your options, deciding which cards to dump and which to keep, and people who do that will not only make the game go a lot slower (and thus not feel much like a race, unless you like to race snails), but you will want to punch them in the duodenum. So don't do that.

Sadly, the part that doesn't work very well is the namesake for the game. It's called Nitro Dice, because your dice go fast, but the best thing you could do for the game is get rid of the dice and use little cars. It's tremendously irritating to have dice for pawns. A normal six-sided die would be enough grief, but having to spin and spin a ten-sider to find your current speed before you forget where you started your turn is simply irritating.

I can kind of envision the design process that happened in the creator's head. He was sitting around, probably half-baked and eating a bowl of Froot Loops, when inspiration hit and he said out loud, 'Hey! I'll make a game where you use the dice as race cars!' His cat, who was the only living thing present, ignored him and began to chase imaginary mice around the room, because it had a serious contact high and was tripping balls. So the designer set about making a pretty darn good racing game, but was completely married to the idea of using the dice as cars, and wound up with a cool racing game that sucks because of the dice. He also wound up with severe munchies, and his cat eventually went into rehab.

However, I encourage you, if you like racing games, not to throw out the baby with the bath water. For God's sake, take your baby out of the water before you empty the tub. How absent-minded do you have to be throw out a baby? Stupid.

As I was saying, Nitro Dice is a clever little racing game. It just needs one tweak - you need to not use dice. At all. Make another little card that you put next to your damage card, and keep track of your speed on that card. Then get some Micro Machines race cars and play the game with those. Then the game would be called Nitro Cards, which would not be as catchy, but at least it would not be as massively irritating to play.

In fact, I enjoyed Nitro Dice enough that I intend to find some small car models and play it more. It's a fun game that lets you picture a high-stakes street race in your head while you scream through corners and knock other cars off the road. It can be brutal and smart, and there's plenty of room for tension. Don't be bothered by the fact that the dice completely ruin an otherwise exciting game. Just get little cars, and this will be a very fun game.

Cons:
The dice are a horrible idea, and should be replaced

I like Nitro Dice, and once I find some cool cars for it, I will be playing it a lot more. If you want to try this neat little game, you can find it at Noble Knight Games, and even save a few bucks:
REV IT UP
Posted by Matt Drake at 2:41 PM

You should look into "Micro machines" car models. That would makes you good pawns

It sucks to hear that it's actually a good game... I bought Print and Play PDF about a year ago before the game was actually published, and I'm pretty sure I trashed it when I read the rules and realized the dice were only the playing pieces. I lost faith in the designer. Sounds like I made a mistake.

If you don't like using the dice as cars you can do it like this guy did with the dice on the condition track.

Yeah, I like the game itself. I'm on the hunt for affordable cars. Some of those Micro Machines are thoroughly bitchin', and would make fantastic miniature race cars.

Nitro car games are my fav but only to play on my mobile!