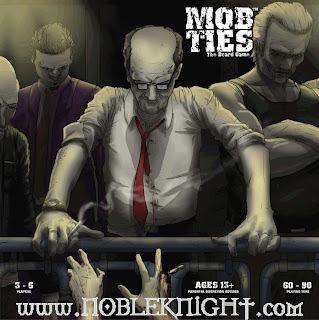 There are not very many games like Mob Ties. Yes, there are mobster games, like Nostra City. And yes, there are games with lots of diplomacy, like Battlestar Galactica (or, you know, Diplomacy). There are even games with a lot of dead bodies and player elimination, like almost every game that is awesome. But I don't think I've played very many games that only end when an atrocious number of players have been murdered or imprisoned, and I especially don't remember playing games that were such a constant game of 'Let's Make A Deal.'

Mob Ties is definitely a game about violence. It makes no attempt to pretend that it's a family game, except that on the side of the box, it says, 'A Family Game,' but that's not family like Leave It To Beaver, that's family like Sopranos. The cover of the box shows a guy with his fingers broken, and there's art in the game that shows a couple thugs shoving a man's hand into a meat grinder. It's not bashful about being a grown-up game. If it were any less kid-friendly, it would come with a loaded gun and a balloon full of heroin.

The game play is just as bloody as the art, too. You'll have multiple opportunities to kill your friends or send them to Riker's Island. The cards that control nearly everything you do are chock full of drive-by shootings, drug overdoses, and accidental-on-purpose dismemberments. In fact, in one game we played, more than half of our mobsters were murdered in the first turn.

It turns out, though, that it's not always a good idea to do as much killing as we did. For one thing, the guy who had goons left over ran away with the game, and we never had a prayer of stopping him. For another thing, the threat of impending doom is sometimes more powerful than the doom itself. Hold up a hand of seven or eight cards, and people will think twice about calling hits on your bag-man. But blow your last card on a failed assassination attempt, and you'll call down the wrath of God - which will especially hurt on account of you being bare-assed naked in the defense department.

The way to play Mob Ties is to dicker, deal and sneak. When someone decides to attack you, offer them some money to hit someone else. If you need a guy to sleep with the fishes, offer to make another person the new don if he'll help you take out your target. Split the take at a particularly juicy racket, or strike up a deal with a third player to swipe the whole thing. The whole game is about making deals and then killing people.

I suppose you could play Mob Ties without making deals, and just try to be all strategic. But there are two problems with that. For starters, this is not a game that lends itself to smart play, because it is entirely too chaotic. I mean, on one turn, you could be running the board, and the next, half your guys are in the local lockup and the other half are in the morgue. That can make long-term planning rather tricky.

No, the way to play Mob Ties is to dive in up to your neck and get your hands dirty. Threaten and intimidate. Extract protection money and pay other players to kill each other. Basically, this game looks like the entire premise arose from that famous line in The Godfather about making a deal he couldn't refuse. It's all deals, all the time. The rest is window dressing, and playing without the negotiation would be like having sex with your pants zipped - completely unsatisfying and thoroughly pointless, even if you do eventually finish.

There are things I really liked about Mob Ties, and things that sort of bugged me. I love the interaction, and I'm always a fan of games where people die. But the unbridled chaos means that if you've got one or two players who aren't really into the game, they can ruin it for everyone else. You have to be willing to strike alliances one turn and break them the next, go for the jugular or go on the lam. And even still, it's going to take you a few games to really get the hang of playing Mob Ties, and you have to have the patience to work through a couple irritatingly random games before it really starts to gain any traction.

Luckily, Mob Ties is a pretty fast game. It has a built-in timer in the form of the Feds, whose presence grows very quickly and can shut down most of the board before the end of the game. Between the Feds sending mobsters to death row and fellow mobsters sending your guys to a cold metal slab, you'll be able to run through a game in less than an hour. Which means you'll have time to knock out a few games to get the hang of it, and by the third or fourth game, everyone should be more than ready to start quoting Scorcese lines and talking like New York pizza chefs.

And if you really want to expand your horizons, there's an entire second rulebook full of nothing but advanced rules and variants. One of you mobsters might be a snitch, or you could have reinforcements show up. You might be able to shuttle your mobsters out of town as the heat rises, or you could have the option to trade cards instead of money. You can even take out contracts on a particular player, if you can afford it. There are all manner of interesting ways to make Mob Ties even more interesting.

A game as unique as Mob Ties is going to appeal to a limited number of people. If you have looking for a good mob game and you really like affecting a New Jersey accent, or if you love games that force you to deal with the other people at the table, you might really love Mob Ties. On the other hand, if you prefer games where playing a tile or placing a wood cube is a difficult decision, the game will make you crazy. Leave Mob Ties to those of us who like to see a little blood in the water. This is no Euro, kids. Also, it's not for kids.

3-6 players (but don't bother with less than four)

Pros:
Buckets of bloody interaction
Negotiation is key
So mobster, you'll have to buy a ridiculous track suit and start calling your mistress a goomar

Cons:
Almost psychotically chaotic
Strategy will not help you if you can't strike a good deal
It's about the story - don't play if you're looking for a clever abstract

So you're looking to make a good deal? How about save ten bucks on a fifty dollar game? Now that's a good deal. Check it out at Noble Knight Games:
FUHGEDDABOUDIT
Posted by Matt Drake at 12:58 PM