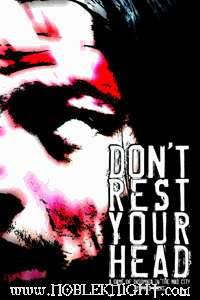 When you think of role-playing games, probably the first thing that comes to mind is a world of dragons and people with pointy ears. You might also conjure up space adventures, or near-future science fiction with virtual universes, or post-nuke holocausts. You probably do not, on the other hand, think of a crazy world where bad guys have thumbtacks for heads and all the heroes are desperately sleep-deprived. But when the crazy bastards who made Don't Rest Your Head were putting together a game, that's right where their heads went.

The world of Don't Rest Your Head is our world, but twisted. Well, not so much twisted, as shadowed. There's an entire city hidden beneath the city where you live, a city you can only reach by losing so much sleep that your mind kind of breaks off on its own. For some, we call this 'wild hallucination,' but for those people who need a nap so badly that they start seeing cops with wind-up keys in their backs, they call it the Mad City.

This is the bizarre and intriguing setting in Don't Rest Your Head. For whatever reason, you've missed so much sleep that you're now invited into this festival of the very odd, and now you have to solve the mystery, or defeat the villain, or find your missing book report. There are lots of ways to fail - twisted monsters will steal your fondest memories or lay waste to your sanity until you think you're John Paul Jones (either the Revolutionary War hero, or the musician from the 60's). But you're more than usually equipped, because on top of being able to actually see the monsters under the bed, you've also got super powers. They're weird powers, but they'll probably be useful.

Lots of games dabble in making the character the important piece, but in Don't Rest Your Head, your entire game will center on you. It starts when you create your character and tell the game master exactly why you're so damned tired. You'll even tell him right where your adventure starts. You'll invent a quest for your wacky alter-ego, whip up a back story, and all of this will relate directly to how you play the game.

In fact, when we played Don't Rest Your Head, I couldn't even start coming up with an adventure until characters were created. Once they were, it took me two weeks to find some way to play out the seven apocalyptic dreams that had created the main hero (though the one character who was only an insomniac because she took too much Aderol was a much easier sell). And the adventures we played had nothing to do with generic settings or dungeon battles or rescuing the macguffin. These stories were one-hundred percent about the characters. Replace the characters, and you'll need a new story.

This is the most striking thing about Don't Rest Your Head, though the system is also fascinating (and I'll get to it in a minute). In nearly any other role-playing game I have ever played, you could swap out a hero and tell the same tale. You might have to swap a couple details - the aunt replaces the father, creating one hell of a confusing wardrobe situation, or the city is moved to Vegas. But in this game, if your player doesn't create an alcoholic private investigator with an obsessive-compulsive disorder and nightmares about the end of the world, you're going to have to go directly back to the drawing board.

Now, that sounds daunting, but it means this is one game that can be incredibly engrossing. Sure, it takes a lot more work, and a lot more investment in the game, but at the same time, you'll have everyone dying to know what happens, and not just because they're curious about what's behind Demon Door Number Two.

The way you get through these stories is also amazing. The system uses piles of regular ol' dice, but the number of dice you get to roll is based on how much you want to push yourself. The game master will announce his personal threat level, and then the heroes will need to respond. The only way to get more dice is to either push yourself to exhaustion, or tap into the madness that seems to be spreading. A very clever dice mechanic means that even if you win, you could get a little more tired, or a little more insane, or possibly just get a little more bloody. Happy endings are rare. Insanity is the order of the day.

Unfortunately, some of the setting details seemed almost comedic, especially for a game where fathers enter the Mad City to rescue their daughters from horrific monsters. The head cop has a watch for a face, and the avatar of Death runs a girl's reform school. The paper boys are relentless enemies - but they're also actually made out of paper. It seems like great lengths were taken to make villains out of dorky puns.

So I did what seemed natural - I threw out all of them. Lock, stock and barrel, I disposed of every monster and villain the game offered. I replaced the pin-headed puppies with black-skinned imps transformed from kidnapped children. I threw out the cartoonish policemen and replaced them with abominations formed of severed limbs. And I got rid of the silly tax assessor with a thumbtack head (the tacks man, get it), and added a serial killer in the service of the darkest threat the world has known since Satan got chucked out of the Holy Land.

And the game was AWESOME. Sure, I tweaked a little, but the stuff that really counts in this book - the character creation, the dice-rolling, and the backdrop of the hidden city - will let you tell a completely twisted story that will have everyone sleeping with the light on. Don't Rest Your Head has some pretty damned silly parts, but it has to be commended for providing a fantastically engrossing way to play out an insane adventure in a world of madness. More importantly, it was incredibly fun.

If you're a fan of manipulating a system to make super-powered barbarians who can crush goblins between their oiled thighs, Don't Rest Your Head is going to confuse and frustrate you. But if you want to try something completely different, something that makes Call of Cthulhu look like a game of Uno, a game that will challenge you and make you really think about why you're doing what you're doing, Don't Rest Your Head is a must-have.

Pros:
Excellent mechanic that is completely inseparable from the setting
Ties the characters to the story to make very personal, customized games
Wild and imaginative setting

Cons:
Some rather silly monsters
Will require some pretty serious imagination work

Don't Rest Your Head is not an easy game to play, but it sure is fun. And you can get it at a shocking discount, right here at Noble Knight Games:
DO BUY THIS GAME
Posted by Matt Drake at 2:40 PM

That sounds awesome - the essentialness (essentiality? essentiability?) of the players' character reminded me of a game I read about recently called Shock. It's currently on a second edition (or version 1.1 as it calls itself...apparently 1.0 was full of typos), but this review of the first edition really got me interested in it: http://www.rpg.net/reviews/archive/13/13125.phtml

That does look pretty awesome. I'll pester them for a review copy.

Well, I tried for like half an hour, but I can't find an email for anyone who could send me a review copy.

I think the author can be reached at Joshua at glyphpress dot com.

I'm glad you threw out the example setting stuff in the book -- it's really just meant to be there as an example of one way you can go with the *idea* of the Mad City setting. Sounds like you dialed the game exactly the way you should, and moreover, as intended. :)

Stay tuned in the coming months for our release of an anthology of Don't Rest Your Head fiction. I think you'll see exactly how on-point you were with your retooling.

Fred, I can't wait to see what you guys come up with next.