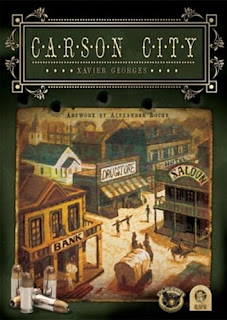 It's my opinion that games with backstories should build on those themes and bring them to life. Like, if I'm playing a spaceship game, I want it to feel like I'm flying around the dark space between planets and blowing up asteroids, and if I'm playing a farming game, I want to feel like I have a boring, menial job. I think that's why I like Carson City so much - it really lets you feel like a cowboy settling an Old West town, especially because everyone knows that cowboys and settlers did immense amounts of math in their heads and that nobody ever died in gunfights.

A person unaccustomed to European games might not understand the story of Carson City very well. If you grew up on John Wayne matinees and Clint Eastwood spaghetti westerns, you probably have a completely skewed idea of the American West. Carson City sets this story straight. For one thing, your cowboys don't die if they lose gunfights. They're deader than Elvis if they go to work, but gunfights are only scary if you win. And for another thing, every good scholar of the Old West knows that the main skill critical to a cowboy's success was the ability to add long strings of numbers in his head.

This brilliant execution of theme is accomplished by simulating the development of the town of Carson City. You'll start with a rather mountainous area and one single house that designates the middle of town, and you'll buy mines and ranches and roads and guns, and the town will grow right in front of you.

Every turn you get a set number of cowboys who will go to work for you. They will run out and claim land deeds, grab the rights to build hotels and churches, train with guns, or just play poker. There are nearly twenty different actions a cowboy can take, and the first part of every turn consists of placing your cowboys to tell everyone else what you hope to do that turn. If someone else really wants to do what you're doing, they can send a cowboy to shoot your cowboy in the face, which would be a lot worse if that bullet to the head was actually bad for you.

After everyone has placed their cowboys, you go through and let your cowboys go to work. Once your cowboys finish the tasks you've assigned them, they die, because shoot-outs are not hazardous for your health, but showing up at the office will lay you out cold. Good thing you get more cowboys every turn, because the mortality rate in Carson City is insane. I can't believe you ever manage to persuade new people to sign on, because every time one of them does what you tell them to do, they wind up in a pine box.

There are so many things to do on your turn, and so many properties available for purchase every turn, and so many places to put those buildings, that it can be really difficult to figure out what to do on your turn. You may want to get an egg timer to accurately represent how hard it was for real cowboys to make up their minds. And since very few of the actions are simple, you'll have to balance five or six different things in your head just to decide whether or not to build a saloon. For example, since the saloon earns money based on adjacent houses, you probably want to put it close to a house you own, and since it has to be on a road, you'll need to buy roads, and since someone else wants the good supply of roads, you'll need to buy the extra guns, only now you only have one cowboy left, and you need to claim the land, so maybe you can accept the loss of the roads, because you need one cowboy to go stand in the middle of a sandy plot and put a 'SOLD' tag on the for-sale sign. And that's an easy turn.

Yes, the lives of cowboys were fraught with complexity, and Carson City brings it all to life. To further represent the diverse characters you might meet in Carson City, you'll have to choose personalities to help you out on your turn. The cavalry captain raises more troops, while the banker raises lots of money. The Chinese worker can buy cheap buildings, and the settler grabs free land. These personalities, when used properly, completely alter how you play, and add yet another level of complication. If you really want to grab the only bank, you may want the sheriff so you can go first, but if you're about to score massive coin for your chain of drugstores, it might be a good idea to take the grocer.

With the dizzying array of decisions to make every turn, Carson City is not a game for the mentally weak. If you like a fast game with a high body count, you probably ought to consider some other distraction. But if you like to ponder multiple dimensions of strategy and tactical placement for hours at a time, just like real cowboys used to do, Carson City might appeal to you. And if the mind-twisting array of choices becomes too pedestrian for you, you can ratchet the whole thing up a notch by playing one of the multiple variants included in the rules. Is the wide-open playing board too simple for you? Flip it over, and add a river! Are you getting bored with the competent sheriff? Play with the variant characters, and now the sheriff gets his ass shot off every turn!

OK, so the theme in Carson City took too many illegal left turns for me to sign off on the story, but I still love the game. It's extraordinarily difficult to master, really tough to learn the rules, and requires Herculean mental gymnastics to play well. It's fun, but it's absolutely not a light game. If checkers is a mouthful of cotton candy, Carson City is a three-pound steak-and-shrimp burrito. It's good and satisfying, but it's not easy to finish.

Pros:
Incredibly deep strategy
Extreme planning required to play
A great mix of tactics, planning, strategy and nimble play, plus a lot of reading your opponents
Really fun, if you like lots of thinking

Dogstar Games has Carson City. It's not the new one from Eagle Games, though - it's an import. Same game, though, as far as I can tell:
http://www.dogstargames.com/product/39938
Posted by Matt Drake at 8:05 PM

what a great review - really enjoyed it.

Hey how about a link here to your blog story site? That would help get people over there more I bet?

So shipping is to much to get rid of your old games, what about having a contest for you blog story site, if you send in a story that you use then you can pick a game of yours that you do not want - but the guy getting the game has to pay shipping? I would be willing to see if one of my stories makes the grade if a game was involved :)!,

We played this a couple of weeks ago and loved it. The only wierd thing was the center of town so so incorrectly named (we rolled a 1,6 for placement of it, which put it in the lower left corner as far from the center as it could have been) that it made for a very interesting, if small, city.

hey, where can I get a steak and shrimp burrito ?

Thank you for this BANG! on review. You put down on paper my exact feelings for this game.

"But if you like to ponder multiple dimensions of strategy and tactical placement for hours at a time..." - this statement says it all. Part way through the first turn, I pretty much gave up on ever playing this game again, so I bought a Jail and placed it on the map. 2nd turn: Well, waddayaknow, another Jail just turned up. Bought that one too! Everyone else was too busy trying to win the game to see that I didn't give a rat's behind... heh heh heh... Little did they know that I was about to unleash Jesse James, Billy the Kid and the Clanton Gang! For the remainder of the game there was a heck of a lot of gunshootin' going on as I robbed everyone in sight.