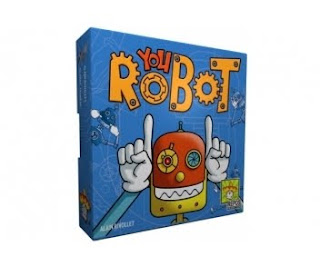 So much for theme week. I was considering doing three heavy games this week, but then I got to Friday and didn't have anything else that would hurt your head. In fact, the only game I have ready to review right now is a party game for children or inebriated grownups. It's called You Robot, and it's only slightly sillier than that 'Honey If You Love Me Smile' game we used to play in eighth grade as an excuse to sit close to a girl.

You Robot will not allow any opportunities for physical contact, but there is a certain amount of goofy party fun. It's kind of like playing charades, but instead of moving your hands and making faces to try to get your team to guess 'Swiss Family Robinson', you'll use three double-sided cards to get your teammate to point to his head.

Everyone playing is split into teams. There are rules for an odd number of people, but the best rule for this case is that one person has to leave. Then one person from each team becomes the crazy teacher (I didn't make up that phrase, it's in the rules) and the other is the robot. The teachers all look at a card that will tell them what they have to get their robots to do, and then they wave the cards around until one of the robots does what it shows on the card.

There are two things that make this a little bit interesting, instead of Down's Syndrome charades. First, the varying poses are actually somewhat interesting. You might have to make your robot clap, or talk on a phone, or stand on one foot. Sure, that's still pretty special-ed dorky, but some of the poses are difficult enough to be fun. There are no pole-dancing or oral sex poses, because this is a party game that seems intended for children, but I'm personally in favor of an adult version that includes nudity and maybe some dry humping.

The other thing that makes You Robot a little clever is the hand of cards you use to instruct your robot. You can't make faces, move your hands around or say anything, but you have one card that shows the whole body (so you can point to the leg), one that shows an arm, and another that shows arrows. The arrows can be turned to tell your robot to lift his arm or lower his chin or call Child Protective Services (that last one would take a few extra steps). A few other cards give more specific instructions, if you can get your robot to understand what you're trying to say.

My kids are teenagers, and they loved You Robot, and even begged us to play more. My wife and I were unfortunately sober, and we thought it was really dumb, and so refused to indulge them. But if you consider the fact that the kids are still young enough to think stupid things are fun, it makes sense. They also pretend to hate ball pits, but drop them off at Chuck E Cheese when there's nobody else around, and they'll pretend to be killer whales for hours.

Despite some cute, whimsical art and a somewhat innovative premise, You Robot held no appeal for me whatsoever. But if you're trying to entertain a room full of awkward teens at a church lock-in, you could do a lot worse. Because teenagers only think something is dumb if nobody else is doing it.

Pros:
Kids seem to like it
Like charades, but with a backwards twist
Cure art
Cheap, small and portable
Up to 10 players, so you can occupy a bunch of kids at once

Cons:
Most adults will read the rules, then be too embarrassed to admit they took it out of the box

Dogstar isn't carrying You Robot, but you can find it cheaper than used dirt at Funagain:
http://www.funagain.com/control/product?product_id=020554
Posted by Matt Drake at 1:01 AM

A charade game where you try to get a robot to dry hump something? Sounds like it would be this game as licensed by Robot Chicken. :-)