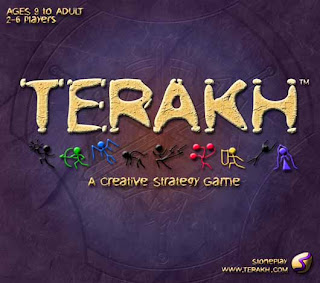 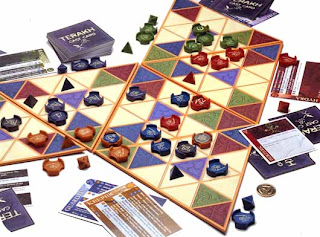 The reviews I write tend to come in one of three basic flavors. Your first flavor is the bland vanilla, and it goes something like this:

This game was OK if you like this kind of thing. Here's a joke about boobs or the mentally handicapped.

My second basic flavor is the beatdown review. It reads a little like this:

This game is horrible, and the designer should be embarrassed. Now here's a dick joke.

The third flavor, and my favorite to write, is the Big Winna review. It's kind of like this:

This game is totally kick-ass, and you should buy it if you can. Boobdicktard.

Tonight's review is the third kind of review, the Big Winna review. Because tonight, I'm going to tell you about one hell of a fun game, one called Terakh, and then hopefully you'll all run out and buy a copy, assuming you can find it, which you probably cannot because it does not have US distribution and is currently only available in Canada.

Terakh is an abstracted wargame, sort of. It's played on triangle boards, and has people who kill each other. It has color and glyph coding for movement and effects, and you roll tons of dice. It's the kind of game that would translate famously to a video game I could play on my phone (that is a blatant hint to any Blackberry App developers out there - make more good games, and fewer tower defense games, because those SUCK). It's not terribly complicated, but there's still a lot happening all the time. Success requires attention to details, long-term strategy, and smart tactical maneuvers. A little luck won't hurt, either. OK, a lot of luck.

Each player gets six of the grooviest little prong-sided hockey pucks that ever got put in a game. One side of the disc dude has a stick-art man ready to hurt people, and the other side has the same stick-art guy hiding behind his shield (or it could be a different stick art guy - they all look the same to me). You position your wacky warrior pieces around your little triangle board, which has more triangles in a bunch of different colors. So far, this is extremely abstract. But when you add in the fact that the entire goal of the game is to kill your opponents and destroy their elders (which are four-sided dice), it becomes an abstract with a body count.

Each player also gets an idol token, which is a tiddly-wink that fits inside the prong on your disc dudes. When your warriors cap other warriors, you can put rubber bands on the prongs of the hockey puck sporting the tiddly-wink (those are technical terms, which I am using to make myself feel smarter). Those rubber bands make your idol tougher, which is especially cool because idols have all kinds of special powers, like ranged attacks and teleporting and stuff. So now you have a teleporting hero who hits harder than anyone else and can take a punch.

The reason those idols don't unbalance the game is because combat is a basic roll-off on an eight-sided die, and even if you're adding a bunch to your roll, if you get a 2 and your attacker gets a 6, your ass is dead. You only get one hit point on most guys, so this capricious luck factor (which I usually hate) actually ends up making the whole thing a little more balanced. Sure, you've got your Ultimate Fighting Champion, but he can still get smoked by a nerd with a pocket protector if the dice don't go his way.

There's a ton of different things to do in Terakh, but you only get five actions a turn, and some stuff costs multiple actions (like attacking) and some stuff is limited to elders or idols. You can spin the board where you elder is sitting, and you can teleport from the central purple triangles on each board. You may want to park some guys on blue spots, to use a particular spell, or you may want to crowd around the purple spot to keep a foe from bringing in his fallen troops. Then you've got cards with spells you can cast to totally manipulate the game, and while these cards mostly require you to have a guy on the right color, they're incredibly good at changing the outcome of the battles. In fact, the whole game can twist on a few cards and some really smart plays that nobody saw coming.

I think the main reason Terakh is a simply awesome game is the fact that it never gets to the point where you go, 'that guy is going to win,' because the other guy might be totally sandbagging and setting up a superior position at the expense of sacrificing a few of his hard-earned ass-kickers. You can take out nearly everyone on the other teams, be sitting with all of yours, and then lose because the other guys pulls a last-minute Hail Mary and ganks you without any warning. It's not luck, either - if you don't see those killer plays and the other guy does, he's going to make you pay.

On the topic of luck, Terakh is chock-full of it. People who hate leaving the outcome to a die roll are going to detest this game, because you could have your entire turn pissed right down the toilet because the dice hate you. And then your buddy could have a streak of luck so insane that you'll go from winning to sucking wind before you even realize what's happening. Me, I'm a big fan of dice, but if you're not interested in seeing some twists of fate that send the top dog to the bottom of the heap, you should probably pass.

One last topic deserves special mention. The pieces in Terakh are unique and really, really nice. I suggest you spin past BGG and look at some of the pictures of this game. Ender's Game, in particular, wrote a great picture review. The warriors are incredibly sturdy plastic, and the triangle board that you have to spin a lot have velvet on the back. Yeah, like an Elvis painting. The colors are bright, the rulebook is full-color, and the art is... stick figures. But whatever, it's worth owning Terakh simply to have a box of the wackiest components you'll see in a game. The only way to make these more unique would be to include a quart of motor oil and some Russian porn.

I seriously recommend this game. It won't be leaving my collection, and I plan to play it at nearly every available opportunity. It's fun, smart and tricky, with the kind of components that make you want to play the game. Do yourself a favor and check out this awesome indy game.

Cons:
More luck than many people will find acceptable

You can only get Terakh in Canada, which would suck if they weren't offering free shipping right now. Also, the game is ridiculously underpriced, so it's like you're robbing them. Here's a link. Go rob them.
http://www.terakh.com/order/online.html
Posted by Matt Drake at 7:39 PM

And yes, that means I bought it. There hasn't been one game that you've reviewed as a great one that I've played and gone "Drake must have been smoking crack when he played this one".

In fact, a glowing review from you usually means that I'll buy it immediately. I usually playtest at a convention and find out if I like a game first.

I am glad I am not the only one that ends up immediately picking up the games he gives a good review to.