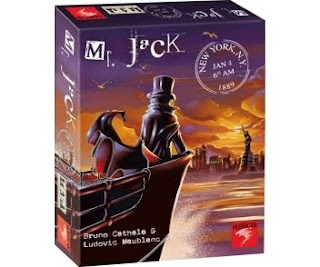 It seems a little odd to me that a game about history's most famous serial killing psychopath is a cute deduction game that's perfect for playing with the kids. Well, one kid - it's only a two-player game. But my daughter loves it (though she loves it a lot more when she's beating me) and doesn't mind at all that the goal of one player is to capture the world's most notorious murderer, and the other player's goal is to allow the bloodiest back-alley killer of all time to get away.

Mr. Jack in New York is the stand-alone sequel to Mr. Jack. The premise is that Gentleman Jack (an odd moniker for a man with a penchant for butchering hookers) has escaped to New York City, and now the police have to catch him. But Jack is a master of disguise, and so in order for the police to capture him, they have to identify which of the eight characters is actually the psycho in disguise.

If you've played Mr. Jack, you already know pretty much exactly how this game works. One player is Jack, the other is the police. The players take turns moving two characters at a time to try to expose The Ripper or keep him hidden. The game comes down mostly to a trial of elimination with a heavy dose of tactical maneuvers. At the end of a turn, if Jack is next to another character, or standing under a street lamp, Jack is visible. And if he's visible, the police character knows that all the characters that are not visible are not Jack. If he's in the dark, then the characters who are in the light are not Jack. And if he's completely invisible, then it might mean you're playing an HG Wells game or a cheesy Kevin Bacon movie.

To complicate things, every character has a special ability. Cloud Rider, for instance, can move through buildings, and Lewis Howard Latimer installs gaslights. Monk Eastman is a mafia boss who can make other people move instead of himself, presumably by making them offers they can't refuse. Captain Callahan moves the crime scene tape, which is only a special ability in this game, because in real life, that job requires less than a fourth-grade education.

With characters moving around, building parks and metro stations, throwing up yellow tape and moving steam ships, it becomes just as important to plan your move as it does to figure out what your opponent will do. Move a metro station to relocate one of your characters, and you might just let Jack have a clear run at the exit. You might move the snobby woman away from the ship captain just to wind up with the Texas Ranger next to her, probably making inappropriate suggestions and asking if she wants to touch his pistol.

As if all that wasn't enough to track, the addition of the sneaky informant can throw the entire thing into disarray. If the cop can get someone to the same space as the snitch, he can grab an alibi card, which will conclusively prove that one of the either people is not the bad guy. In a thematic twist, the mafia boss is not allowed to put concrete shoes on the snitch and drop him into the harbor, which would probably be far too violent for this game. Hell, Mr. Jack in New York doesn't even have bloody noses, let alone outright murder. That would be just tasteless in a game where you're hunting a guy who chops up prostitutes like he was carving steaks. After all, this is a family game.

Mr. Jack in New York has quite a bit more happening than its predecessor, and if you're not sure if you can handle the brain-freeze brought on by attempting to calculate eight different moves at once, you may want to start with the original. But if you're up to the task, and you like a little mental aerobics, the new version is pretty damned fun. It's not one that I pull out very often, but that's mostly because it's just a bit too cerebral for a late-night relaxation game. If it's an hour until bedtime and you're looking to unwind, this is not the game you're looking for. Try Dominion - I can play that when I'm so tired that I'm propping my eyes open with toothpicks.

The Mr. Jack games have proven immensely popular with the hobby gaming crowd, so it's not as though I need to make a steep case for them. If you like the first one, you'll like this one. If you like deduction games with lots of tricky maneuvering, this is a good pick. But if you like to shoot zombies, battle robots or hack your way through hordes of goblins, you'll probably be annoyed, because the theme is just an excuse. Me, I can play nearly anything - but I have to be feeling pretty smart if I want to take on Mr. Jack in New York.

Pros:
Very smart game - smarter than the original
A great exercise for the brain
Neat pieces and fun art

Dogstar Games has a very good price on Mr. Jack in New York, so if you're feeling clever, run over and give it a spin:
http://www.dogstargames.com/product/ASM700300
Posted by Matt Drake at 5:42 AM