Board Game Review - Risk: Lord of the Rings 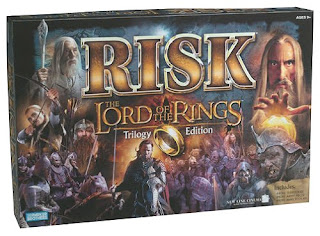 As I sit here in the clutches of a powerful sinus infection, my mood darkens to the point that I want to find a crappy game and piss all over it (you know, metaphorically speaking. I would never actually urinate on a game. That would reduce trade value considerably). And as I look about my cluttered office, my gaze lights on Risk: Lord of the Rings, and I decide that it is the perfect candidate to accept my cathartic wrath.

It's not that it's an ugly game. It actually looks pretty cool, with the whole map broken up into different provinces in Middle Earth, shots from the movies on the cards, and little soldiers who look like trolls and orcs and giant eagles. There's a ton of visual appeal here. Just looking at the game will make you want to play it, especially if you like Risk as much as I do.

It's not that the basic game play is flawed, either. You get a few starting spots at random, then you can choose a few more, and then it's on, just like in normal Risk. You're going to grab territories in big dice-fueled brawls, killing indiscriminately and claiming cards. Plus you have leaders who can travel about, helping out in fights and recruiting extra guys to come help. There's even an extra deck of cards that you can use to tweak the game a little and give you some strategic options as you play. So far, this is Risk, with a healthy dollop of Middle Earth.

But then you come to The Ring. It starts out in The Shire, and every turn it moves closer to Mount Doom. Some of those extra cards I mentioned can slow it down, but eventually, it's going to leave the board, and when it does, the game is over. This means that the game ends regardless of whether anyone is enjoying any success, whether any game-related conditions have been met, and whether anyone is even remotely prepared to finish the game. Ending the game at a specific moment might work for lots of game, but it does not work for Risk. It is viable in 2210; it kills an otherwise fun theme variation in Risk: Lord of the Rings.

The real problem is that sooner or later, you'll get to one person's turn, and that person will have a two out of three chance that his turn is the last of the game. And so, rather than buttoning up and holding out, that player is incredibly likely to go for broke, pushing as far as he can to grab as much as he can before the game comes to a sudden, arbitrary halt. Like my good friend Janice Joplin is fond of saying, freedom's just another word for nothing left to lose. If you know it's the end of the game, there's no reason not to start lopsided battles on the off chance that you could win. One guy runs roughshod over everyone else, and then you roll a die to see if the game ends. If it does, he wins. If it goes on, he's screwed.

At first I thought this ring thing was going to be a neat timer for the end of the game. It seemed like a good way to make sure everyone is pushing, and not just turtling up in Australia (not that you can do that in Middle Earth, because, among other factors, there's no Australia). The impending end game should have players taking greater risks, and that is, after all, the name of the game. Unfortunately, it ends up being a thing where whoever gets the last turn wins. And since the end of the game is decided by a die roll, that means the winner is decided by a die roll, and you could have just rolled a die, checked the result, named a winner and saved everyone a lot of time.

But I'm not trading Risk: Lord of the Rings away just yet. The only part of the game that I think is completely hosed is this ring moving thing. There are ways to fix this game. The figures are great, the cards are fun, and the map is gorgeous, so there has to be some way to make this a good game. I'm not sure exactly how, but I know this could be a fun game. I mean, it is Risk.

Cons:
The moving ring as an end-of-game indicator ruins the whole thing

Want to know something insane? There's a copy of Risk: Lord of the Rings at Amazon for $200. No, I didn't accidentally add a zero.
http://www.amazon.com/Hasbro-Risk-Lord-Rings/dp/B00006653W
Posted by Matt Drake at 5:12 PM

Hmm, I picked this up on eBay (for a lot less than $200!) but haven't gotten it to the table yet. The basic rules with the ring sounded asinine to me, so I was planning on using the variant, where the bad guys need to look for the ring each turn. They win if they find it and the good guys win if the ring gets to Mordor. It's sounds like it will be a bit less like Risk, but a bit more like a playable game.

Now, I'm the one weird person who likes the "Ring" timer - it keeps games short enough for an evening's entertainment, so that we're not playing until 2AM trying to remove the turtle from his Aussie shell.

Hey. Which version did you play? There are Conquest and Trilogy versions. The board is different. I have only played the Conquest version.

While I like playing with the One Ring as that is what makes it "feel" like Lord of the Rings, the Trilogy edition instruction manual has a simple advisement that if you want to play standard risk, only use the rules printed in black. If your complaint is that it doesn't play enough like Risk, that is your fix and it's right there in the manual that came with the game. Otherwise, the One Ring mechanism is necessary to recreate the race against time that the novels and movies present.

Playing with standard Risk rules has its own rewards, as the foreign geography of Middle Earth leads to different strategies. I like pulling it out as an alternative to the regular Risk board from time to time.

What we generally do is play without the ring or ring effecting cards. Another thing you can try is "If the territory has the ring's path in it, -1 to defense. If the ring is there, -2 to defense. Also, after it falls into mount doom, we have to blow up the other two right? And we pretend to lose count. We also sometimes play with all the rules that don't involve the ring. And when it says "Move the fellowship" we throw it at each other!

I have been playing this version of Risk for 3 years now and every game is different. You have a partner who sits opposite you. I also have the extended part of the board. We do not bother using the ring in the game aqs it is over far too soon.