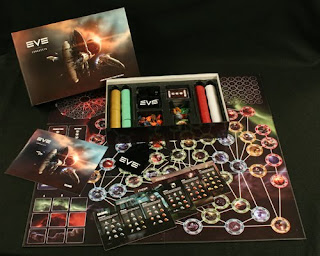 I've done theme weeks in the past, where I reviewed three games with something in common. This week's theme appears to be 'slow and complicated.' Maybe I should tack Through the Ages onto the end. Too bad I did that one already.

Today's slow and complicated game is EVE: Conquest. It's based on a video game (strike one) and is published by White Wolf (strike two). Yet somehow it still manages to hit a double. Not a home run, certainly, and if you're playing with two people, it's a humiliating strike-out, but get four people around the table who want to spend some time creating extraordinarily long-term strategies and planning out every nuance of a thoroughly complex chain of events, and you'll wind up having a good time.

The board is this giant map full of star systems with inhabitable planets, and you'll all be trying to grab up territories and claim political power. The thing is, at any given time, only a few of those planets are worth anything. You have to surround a planet to build an outpost and exert a little political influence, and in order to score, you have to put outposts on two planets that are important right then.

This slightly complicated idea is further muddied by the fact that, on any given turn, you can only do one kind of thing. You have three different markers for development, production and logistics, and each one has to be scheduled. You don't just go around the table in order - you have to put your marker four months out, and when it comes to your turn four months from now, you'll be able to build some troops. You won't be able to send them anywhere, mind you. For that, you have to wait another two months for your next logistics turn. And if you want to grab nearby unclaimed territories, you have to wait another month after that for your development turn.

To make matters even more difficult, there are three levels of turns, and you have to allocate resources to upgrade them. An upgraded production turn takes longer, costs more, and yields a whole hell of a lot more troops, which, as I mentioned a second ago, you can't use until a logistics turn. You have to plan when your turns will occur, and you have to look at when your opponents will have turns, and you have to guess where your opponents will play and defend those areas while creating a long-term strategy that involves timing your turns to maximize the benefits of each. Between turns, you can build a Hadron Super-Collider, because that's going to be a little less involved.

At some point, you're going to run up against an enemy. Someone at the table is going to have a planet you want, or you're going to need to stop them from expanding any more. Assuming you've got a logistics turn, you can take a bunch of soldiers (which you placed earlier, on a production turn) and invade. But this isn't Risk - you don't just roll three dice to his two and count losses. You pick from a bag of 15 dice that come in three different flavors, and if you have spies on the enemy planet, you might get to find out what your enemy picked. Then you roll, and compare tactical results, hits, shields, and any extra effects if you play some cards. Even fighting is complicated, which is not like real life, where fighting is basically five seconds of frenetic activity followed by six months of braggadocio.

And to be seriously anti-climactic, once you attack one time, the fight is over. If you didn't kill everyone, you'll just have to wait six months and attack again. I did mention this isn't Risk, right? So you also can't take one planet, then use the survivors to hit the next one. You can attack once, maybe twice in a turn (assuming you've got two guys in position), and then you're done. Hope you didn't spend too much money on that move (unless it worked).

The end result of all this high-minded planning and strategy is that the game is slow, but very deep. There are so many different decisions that even on a simple turn, you could spend five minutes puzzling over which outpost would be best suited to receive a couple reinforcements. With all the different planets you could grab, cards you could play, turns you could upgrade and fortresses to reinforce, you'll be tired when you finish playing. This is another big fat burrito of a game.

Apparently, the creators of the game were not satisfied with making complicated rules. Because just knowing how to play is complicated, but actually getting through the game is incredibly difficult, thanks to some design decisions that appear to be made solely to confuse and irritate. For instance, you have to surround a planet in order to claim an outpost there, but since adjacency is determined by slim white lines, it's not hard to miss one and think you own a planet, and then notice three turns later that there was one line extending halfway across the board, and since you didn't ever put a soldier on that planet (probably because you didn't even know it was there), you shouldn't have grabbed that spot in the first place. The map looks like a spider web in a wind storm, and it's not at all difficult to get lost.

Color schemes are another problem. There are four colors of players - white, blue, red and gold. Each player has three turn markers - blue for development, gold for logistics, and red for production. So my question is, what color-blind asshole thought it would be a good idea to make the turn markers the same colors as the players? Because I'll look over at the planning calendar and think I've got a turn coming up, but I don't because while the next turn is blue, it's the red player's blue marker, not the blue player's gold marker or the gold player's red marker. Would it have killed someone to use purple?

These aren't the only design problems that plague EVE, but they're the biggest. We could talk about the outpost colors, or the giant plastic poker chips (presented in pastels right out of 1986), or the cards that don't seem to do what they ought to do (why are production cards only useful during a logistics turn?). All the incredibly poor design decisions in this game mean that what could be a thoughtful, smart game tends to dip into violent, frustrated profanity on an overly regular basis, as players discover that they have, once again, made the wrong move based on some little thing they missed. It makes the whole game more difficult to play, and when the design gets in the way of the game, that's a travesty.

If the producers and visual designer for EVE: Conquest had done a better job, this could have been a really cool game. As it is, it's a good game, with the right crowd, and it could be fun. But it's sloppy, cumbersome and more complicated than it needed to be, and that means that you should only buy this game if it really sounds like just your thing. Otherwise you'll be trading it away, and since I already have a copy, you won't be trading it to me.

Pros:
Really deep
Long-term planning is critical
Fun, if you like this sort of thing

If you just have to have a copy of EVE: Conquest, you can get it here:
http://store.eve-online.com/EVE-Conquests-Board-Game-P148.aspx

It is NOT worth what they want for it.
Posted by Matt Drake at 9:28 PM

My problem with this game is that I won due to randomly scoring points for planets in a snowball effect at the very end. Not a satisfying win at all.

As much as I love EVE: Online the board game doesn't really evoke the game other than the names. It could have just as easily been set in Europe. The scoring system is incomprehensible and play is terribly slow.

Wow, so in other words, it's just like the MMO! EVE Online is notorious for its extremely disorganized user interface. Entire alliances in the game have fallen due to such epic things as "not paying the alliance upkeep bill properly".

Except that the "not paying" instance was intentional...

thanks for your helpful and detailed review i'll give this a miss lol,

For the record eve online itself is actually very good, and in many aspects quite unique, that ccp allowed their name to be stuck on this saddens me a little as a board game shouldn't just be something outsourced like a coffee cup.

Thanks so much for your post, pretty useful information.