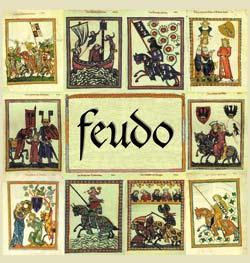 Regular readers may have picked up on the fact that I like games that have what polite women sometimes call 'hoochies'. The harem in Dominion: Intrigue, for instance, is one of my favorites, mostly because it features scantily clad females who have a lot of sex. After reading the rules for Feudo, I decided that I liked at least one element of this game before I even played it, because one of the units each player controls is the seductress. She's actually called 'milady', but since all she does is knock boots or give men diseases, I like to think of her as a trailer-park porn queen.

If the main goal of the game was to get horizontal with cheap floozies, Feudo would actually have a lot going for it. And this 'milady' thing is such a dominant part of the game that it definitely does make it more interesting. It's kind of like chess meets a wargame, but with hidden moves and the plague. But it's also a little bit Puritan, because it's really in your best interest to avoid getting close enough to let the other guy's tramp get her hooks in your leader. Before you know it, she's producing a dress with stains on it, and he's telling lies to Congress.

Each player in Feudo gets the same batch of units. Mostly, they're all soldiers and knights, but you also get a baron (who is a bad-ass on wheels with a weakness for easy women) and milady (the afore-mentioned trollop). At the top of each turn, everyone picks which units they'll move that turn, and whether they feel like paying them to work harder. Then you take turns moving the guys you chose, and you try to take cities and kill people to earn big points. If somebody gets too close to your trampy dame, she'll run right up and bed their leader, and the whole army will sit around with their thumbs up their asses, wondering if he's ever coming out of his tent, and whether he might not have the clap later.

To add a little mayhem, you've also got the plague running around the board. Get too close to an infected city, and all your guys will start calling in sick to work. Let your floozie get too close, and she'll be able to transfer her bad fortune to the enemy. Basically, all his guys will need penicillin shots, and it will burn when they pee.

So Feudo is a fairly smart game with hookers and a body count. So what I can't figure out is, why don't I like it? It seems to have all the ingredients for awesome, and yet it just kind of falls flat. There seem to be some unbalancing elements, too - the whore will always seduce the baron, if she gets close enough, and then that player essentially misses his entire turn, creating one hell of an advantage for everyone else. The plague can suddenly wind up right in the middle of your concentrated power, and the next thing you know, you're too weak to pick up the TV remote, much less go kill things. And since you only get a few units for the whole game, going toe-to-toe with another player just opens it up to let the other players grab cities and then kick you from behind while all your guys are facing the other way.

I hate to criticize a game with easy women and killing. It seems to go against everything I believe about games. But even when games do include sex and violence, they still need to be fun (especially when there's sex and violence, it should be fun. Why else do we go to the movies?). Feudo seems like a pretty smart game, and while it doesn't completely fail, it never really succeeds, either. So whether or not milady is wearing a T-back thong and stripper boots, I'm still not going to play this game again.

Pros:
Highly tactical and very strategic
A very small amount of luck means skill is a greater factor
Relatively easy to pick up and learn
Whores and war

Cons:
A few unbalancing factors
Not really all that interesting, which is odd because it's a fairly well-designed game

You may be reading this and thinking, 'well, Drake didn't like it, but I still might.' So here's a link to buy it. Knock yourself out.
http://www.funagain.com/control/product?product_id=016740
Posted by Matt Drake at 3:09 PM