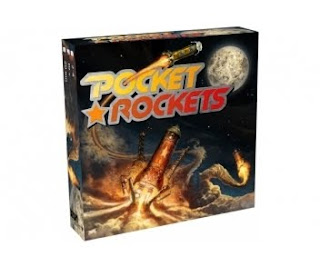 Every now and then, you'll see one of these silly interview questions that asks something like, 'if you were stuck on a desert island, what three games would you want to have with you?' I always thought that was kind of a stupid question - my pick is going to be whatever game includes canned food and a satellite phone, because frankly, if I'm stranded at sea, the last thing I'm going to do is break out a game. For one thing, we're assuming you're there with a handful of friends, in which case your first priority should be making spears in case your fellow survivors go all Lord of the Flies.

In this scenario (which is not only less disastrous, but also a great deal more likely), you might want Pocket Rockets. Before I continue, I must mention right off the bat that the name of the game is not a euphemism. You may have heard the phrase, 'I've got a rocket in my pocket', which generally means you would very much like to have some sex. The name of this game does not refer to that. It's actually just a game that you can fit in your pocket, and it happens to be about building rockets. There are no dick jokes intended.

The game is incredibly easy to learn. There are six stations that allow for six different actions, like building rockets or changing the direction of movement. You have to move around between the stations, drawing cards with pictures of rocket parts (still not a euphemism for anything). Then you go to the rocket-building station. Then you go to the launch pad and fuel up your rocket (OK, that one sounded pretty questionable, but it still doesn't refer to anything nasty). You go around for a few turns, drawing cards and building your rockets, and when all the fuel is claimed, the game is over and whoever has built the best rockets wins.

Despite being a pretty simple game to figure out, it's still clever enough to be fun. You won't be able to build a seriously long-term strategy, exactly, but you'll have to plan your turn pretty well if you don't want to waste a lot of time. You have to make the most of the cards you can get in a hurry, and you may want to sacrifice one move in order to score another, better move later. If you've been driving all day and just want a good way to unwind after you finish dinner and before you fall asleep, Pocket Rockets can be a great way to finish out the day.

It's not just for road trips, either. While the diminutive size does make Pocket Rockets an easy game to shove into the corner of a backpack, it's also a quick, fun game that can fill twenty minutes. I tend to find the term 'filler game' a little condescending, but in all fairness to the term, you're not going to call people over to play Pocket Rockets. For one thing, if they don't know that it's a game, they might think you're making a pass at them, and that could be uncomfortable. For another thing, there isn't enough game here to plan an evening around playing it. But once you do schedule that big game, and you're waiting for the rest of your friends to show up, Pocket Rockets can keep you from having to engage in small talk, and allow you to socialize without all that messy conversation.

I wouldn't say that Pocket Rockets is the kind of game you want with you on a desert island, mostly because nothing in the box is edible. But if you happen to shove it into a shirt pocket on the way out the door, and then your plane goes down with a couple buddies and you somehow manage to make it to land without soaking your shirt (and thus ruining the game), I suppose you could do worse. Ever try to put Cosmic Encounter in your pocket? It won't fit, unless you have absurdly big pockets. And as an added bonus, you don't have to worry about the possibility that your friends are too dumb to play - this is an easy game, light on the brainpower but engaging enough to keep you occupied. It's basically a great travel game, or the perfect game to play while you're waiting for that game of Dominion to finish so you can all jump into Last Night on Earth.

It is not, however, a dick joke.

Pros:
Easy to learn
Easy to play
Finish in 20 minutes or less
Tricky moves and clever plays, all in a package that will fit in your pants

If you want a nice travel game at a dirt cheap price, look no further than my friends at Dogstar Games:
http://www.dogstargames.com/product/ASMKG17
Posted by Matt Drake at 7:56 PM