Unfortunate Game Review - Are You the Traitor? 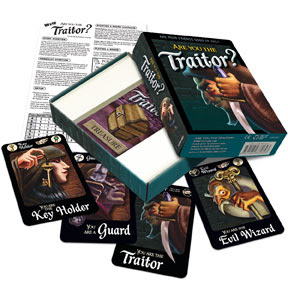 I like to watch American Idol. Not the actual show when they're all singing and at least reasonably decent at it - that part irritates me, because they're all so thoroughly average, and it bores me to tears. The part of the show I like to watch is the auditions, when freaks, losers and horrible singers try to persuade the judges that they should be professional rock stars, and that their current career track of washing dishes at Pizza Hut is not a long-term position.

The reason I like the auditions is because they make me laugh. My daughter gets mad at me, but I can't help it - when a girl whose mother never explained to her why she needed a bra (despite the fact that her nipples are pointed at her shoes), and who looks like she uses barbed wire for braces, croaks her way through, 'Don't you wish your girlfriend was hot like me,' I just plain fall out. I mean, that's funny, I don't care who you are. Here's a hint if you're thinking of trying out for American Idol - find someone who does not know you, and sing for them, and if they say, 'holy crap! You're really good!', then you should probably still just stick to karaoke.

The same principle applies in game design. Until someone who doesn't know you at all says you've got a good game, you probably do not. Just because your blinded-by-love mother tells you that she really enjoys your creation is not reason enough to order 20,000 copies from China.

Which brings me, in the longest manner possible, to Are You the Traitor? (see Bang! and Attack! for rants about games with punctuation in the title). I can't pretend I'm happy to have to beat this game to pieces, because the people at Looney Labs are really, really nice. If you ever see them at GenCon, they're like a bunch of smiling hippies stoned out of their gourds on happy pills and wearing tie-dyed lab coats. They're super friendly, and they have had some pretty impressive success with some games I would not have initially thought were impressive.

Are You the Traitor?, unfortunately, is not impressive. It is bad. It is like if you wrap a piece of fish in limburger cheese and leave it in the sun next to the cat box, and come back to it after two weeks. It is a very bad game, by nearly any conceivable measure. And since I like the people who made it, it makes me sad. I wish they would have asked me before they went to print, because I would have gently said to them, 'holy mother of pearl, does this game suck,' and maybe saved them some money.

The idea here is that it's like Werewolf or Mafia, where some people are bad and some are good. You've got a keyholder, who has to give the key to the good wizard. You've got a bad wizard, who wants to get the key. You've got guards, who want to grab the traitor, and then you've got the traitor, who doesn't want anything, he just doesn't want anyone to grab him. At the top of every round, everyone gets a card that tells them who they are, and then there's unstructured conversation.

No, seriously, that's in the rules. The game mechanic employed to help you figure out who is who is unstructured conversation. When we played, this meant that both wizards said, 'I am the good wizard,' and then the keyholder shrugged and chose one of them. The round ends when someone points at someone else, and then you show who you are. If the keyholder pointed at the good wizard, or a guard pointed at the traitor, the good guys win. If the bad wizard pointed at the keyholder, or one of the good guys pointed at the wrong guy, the bad guys win. Everyone on the winning team gets a treasure card, and the first player to have ten points of treasure wins. Usually this happens for multiple people at the same time, and the tie-breaker is that you put this away and play some completely different game.

I can see where there may have been potential in this game. With a little... well, anything, really, this could have been a game. But instead it's ten minutes that you'll wish was over. I suppose it could be fun, the way Werewolf is fun, if you were all six years old, but anyone who can write their name in cursive is going to get dumber after every round. One of our players actually said that he would rather stick a fork in his eye than play again. While I would gladly play this game again rather than mutilate my face, I did share his sentiment, just to a lesser degree.

The real nut-kick here is that this is my first review for Looney Labs. I also have Fluxx (which I will review later, and which is actually pretty cool), and I was hoping to get a lot more games from them, like Chrononauts and Treehouse, both of which look fun (I especially wanted a few sets of Treehouse, because they're like a crazy, candy-colored deck of pyramid-shaped cards, and I've heard nothing but good things about them). But now I've gone and called them stoned hippies, and I called their game stinky cheese wrapped around rotting fish, and I fear they may not be in a hurry to send me more stuff. And who can blame them? Would you send me stuff if I called you names? (By the way, feel free to send me stuff and find out.)

So here's the deal - if you see the goofy people in the colorful lab coats who are somehow still smiling on the fourth day of GenCon, smile back, and maybe buy something. Just don't buy Are You the Traitor?, because it is a very, very bad game.

Pros:
The game is very small, and will not take up much space in your recycle bin

Cons:
Almost insulting in the complete lack of decision-making, planning, or even bluffing
Countless games have done this right - Werewolf was even fun in high school - but this is a total fail
Unstructured conversation is not a game mechanic, it is what drunk people do on the phone

To make up for having just blasted their upcoming release to pieces, I'm going to ask you all to visit the Looney Labs site. Even if you don't buy anything, maybe the boost in traffic will take the edge off the limburger-fish thing:
http://www.looneylabs.com/
Posted by Matt Drake at 9:44 PM

Man, how did this sucker get to fly under my radar, considering I spend more than half my work day on BGG??? Thanks for the heads-up - and the hole in my bank account!

What an atrocious review of an excellent game. After wading through your irrelevant nonsense, the reader finds no compelling argument whatsoever against the game, or evidence you even bothered to play it.

There's no mention of the critical group size element in your review. You don't examine any specific problems with the game (and there are certainly a few that a real reviewer would have picked up on).

Instead of any real insight or analysis, all you can offer the reader is juvenile imagery to assert the game is rotten(even resorting to the ultimate olfactory cliché). Alas, the truly putrid thing here here is your review, a lazy miasma of jumbled sentences that does nothing to mask the lingering stench of incompetence.

Even if I were to extend the benefit of the doubt and suppose you had actually played this game, it wouldn't surprise me at all that you didn't like it. The enjoyment of the game is very much a function of the cleverness and charisma of the people playing it.

Thanks so much for stopping by! And here I thought you were a semi-literate jackass who bullies his way around a basketball court. Instead it turns out you know big words like 'miasma' and 'olfactory'. Who knew? Shaq's in Mensa!

I'm so sorry you didn't like my review. No, wait, I'm not. Maybe you can find some boring, bland reviewer somewhere who uses the most inoffensive language possible, and goes into depth about every lame-ass rule, so that when you're done, you don't know if the game is fun - but at least you'll know how to play, should you be bored enough to learn the rules to a game you don't have.

And this game does totally blow. If you think this is an excellent game, then it is no wonder you decided to take up basketball. You obviously didn't have a career in game design. But it worked out - you make more money than God, though you mostly just deserve a swift kick in the nuts for being a douche-nozzle ball-hog.

One more note, Shaq - did you see up there at the top of the site, right under the logo? Where it says, 'crassly opinionated' and 'occasional bathroom humor'? Did you accidentally stumble here on your way to totallyboringreviews.com? When you see 'crass' and 'bathroom humor', were you expecting Shakespeare?

Thanks for stopping by. I wish you really were Shaq - how awesome would it be to tell people you read my site!

Matt, your review is poorly written, and your response to Shaq embarrasses you.

Read your review while googling for the rules of the game. I had a similar experience when I played with some friends but the first group I played it with I misexplained the rules and accidentally exposed the traitor to the guards, spoiling the round. oops.

The rules do give some tips for what the different roles can do to tip scales in their favor, which I think it is crucial for the players to understand to play a good game of Are you the Traitor. For instance, a guard can pretend to be the keyholder and voice conflictions about which wizard should get the key and so ferret out the Evil wizard, who will try to grab the key from the wrong person... and the Traitor, if he knows who has the key, doesn't have to sit idly by but can try to send clues to the Evil wizard to help get the key...

Of course rounds can also go poorly with everyone saying "no I'm not the traitor" and eventually someone gets impatient and accuses someone randomly.


Also, I found this posting about the Shaquille O'Neal linked to via the post from said person: Shaq twittering
Interesting, to say the least.

Coulda been worse. I finally ripped open the cellophane on my copy of Are You The Traitor? at a games night last night. I have no idea where I got it from or when, or from who (there wasn't even a price sticker on it) but imagine my surprise to realize that it was the *Chinese* version of the game. Talk about your WTF??? The rules were something photocopied and badly folded and stuck in the box and the cards were all in Chinese as well. Even the two people there who knew Chinese had trouble figuring it out. In the end, it just went back into the box. Definitely 0/2 for that one.