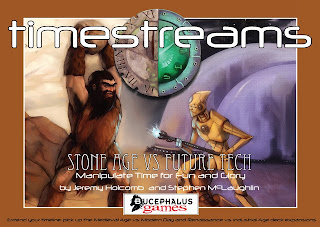 There are some foods I like undercooked. Steak, for instance - I'm a big fan of rare steak. And I love gooey chocolate chip cookies. Some stuff, though, should not be taken out of the oven early. Like chicken. Or brownies. Or pork.
Or card games. If your card game is not finished, you should leave it in the stove until it's done.
Timestreams has an almost ridiculous amount of promise. There are six eras, and players take turns seeding the different time periods with inventions. Each player has cards from a different era - one player will be Stone Age, another will be Modern Age, and a third might be Future Tech. The theory is that time travel has been invented simultaneously in every era, and the inventors are scrambling to make their era come out on top.
You take turns playing cards in each era. Once everyone passes on the chance to play inventions or actions, you move on to the next era. Inventions and actions can interact with other inventions and actions, and once all the eras have been filled up, you go through and score all the inventions you've played.
The reason this works is because most inventions either have Play or Score effects. Like when the Modern Age inventor plays Napalm, he can blow up an invention in an earlier era. The Stone Age guy's Domesticated Animals card makes the next invention get discarded when the scoring happens. The long-term interaction is amazing - you play cards that affect other cards to set up different cards to score when yet other stuff happens. As you play Timestreams, you can see a fantastic amount of forethought and planning goes into playing the game really well.
Unfortunately, all that forethought won't do you a whole lot of good in a game this unfinished. For starters, all this stuff doesn't work right. It should - there are some really cool effects that interact brilliantly - but there's a shortage of stuff working together. Like art inventions - these cards can affect other art inventions, and do cool stuff. The problem is, there aren't enough art inventions. Television is an art invention. A Laser Show is an art invention. Music and Philosophy, however, are not. So you can use the Laser Show to discard Television, but you can't use it on Music.
And then there are the misprints. The most obvious is Androids - this sure does look like an invention, but the teeny tiny print on the card says it's an action. I only have four decks of the six available, so I can't say for sure how many mistakes are in there, but it's bad enough to make the game pretty darn questionable.
Or the cheesy lines - like Yoke, a Medieval invention, which has the cutesy tagline, 'Turns out, the yoke's on you.' It's good they didn't say 'joke,' because then you don't have to feel bad about not laughing. There's a lot, lot more. If I went into them all, I would spend this entire review making fun of very bad writers.
And the graphic design is horrible. The art is poopy. Yes, I said poopy, like I was a child, because the art actually looks as though a child painted it with his fingers and a tub of paste. And it's really big art, which means that the card descriptions have to fit in a little tiny part of the card, which makes them really hard to read. They saved room for goofy one-liners when they could have made the cards easy to read. That's a bad call. That's clumsy design.
But the biggest problem I can see with Timestreams is a huge flaw in the rules. Every round, you get a specific number of cards, based on the number of players. With only two players, you each draw six cards. And only the top six inventions in each time period score. And once each player has played three cards, that would be six, and there's not a whole lot of reason to play any more. Other inventions might move stuff up or down, or actions might change things, but only if they're in your hand - so you probably end the round with three more cards, and then draw six. So now you have nine. And there are six rounds. And each round you draw six more. So by the end of the game, you probably have most of your deck in your hand. Ever try to play a card game where you're holding 25 cards at a time?
I could keep going, but basically what I'm looking at here is a game that came out of the oven before it was done cooking. There are some really cool things going on here, but the flaws render Timestreams too big a mess to enjoy. It might have been fun to playtest, and it would have been satisfying to fix, but as it stands, Timestreams is a delicious crust over a wad of raw dough.
Summary
Pros:
Really interesting premise
Incredible potential for brilliant card play
Cons:
Ugly art
Poor design
Errors abound
Raw part in the middle might give you salmonella

I think many games that are not generally placed in the family of card games do in fact use cards for some aspect of their gameplay.