Board Game Review - Bridges of Shangri-La 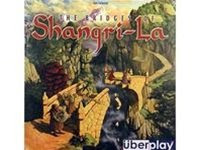 If my memory of geography serves, Shangri-La is somewhere in China. Maybe Tibet, but then, that's part of China now, thanks to the fact that the government of China is primarily composed of power-mad assholes. And when you look at the bridges available between the various mountain peaks in Shangri-La, you can see the superior Chinese construction. Because every time someone uses one of these bridges, they break. That's an even worse track record than the Army Corps of Engineers has with levees in New Orleans.

The neat thing about tonight's game (appropriately titled 'The Bridges of Shangri-La') is that it plays off this shoddy Chinese construction to create a very interesting and fun game. It's not often that art imitates life so well. Not only do we get to learn more about how pathetic a job the Chinese people did when they assembled all the bridges (apparently using wrapping paper and Elmer's glue), but we get to learn a historical lesson about ancient Kung-Fu masters.

Each player starts off with a handful of Kung-Fu masters, each with different specialized abilities. These abilities have absolutely no effect on the game whatsoever (which means that the guy who just looks at the stars all night is exactly equal to the dragon-taming bad-ass), but it does allow us to tell them apart. The dragontamer has a dragon on his counter, the rainmaker has a rain cloud, and the romantic idealist who spends all night looking at constellations has a little silk hankie (not really - it's stars). If there were more dragontamers and fewer stargazing pansies, maybe they could have beat up the Chinese invaders before the Dalai Lama had to go on permanent sabbatical.

Every turn, you can add a master in a village where you have one already, or you can train some students where you have masters, or you can send the students packing to another village. And because all of these bridges are essentially a long string of shoelaces tied together by some Chinese worker making 2 dollars a week and sleeping under his desk between his 16-hour shifts, every time someone uses one, it breaks. The students get across, and then BAM, the bridge is destroyed. Planned obsolesence keeps that impoverished Chinese assembly-line worker employed! Lucky him. Just four more months, and he'll be able to buy a roll of toilet paper.

This bridge-breaking thing is important, because once a bridge is down, it's gone, and the villages are permanently separated. So you have to time that trip really well, because it's the only one you're going to make. If you travel to a stronger town and they beat up all your students, they have to climb down the mountain and take up a career in goat-herding. That, or they have to go work in a factory where they make just enough money to buy a Big Mac, as long as they don't buy anything else all year.

This is a really clever, really tricky game. You have to time your moves carefully - make a new master when you shouldn't, and he might get kicked off the mountain before he gets a chance to train anyone. But add some students at the right time, and you might be able to ward off invading students (but not Chinese soldiers - they don't care how much Kung Fu you know. They have guns). Travel at the right time, and you could strand your opponent in a weak position. Travel at the wrong time, and you might as well just leave your students standing in the middle of the bridge when it breaks.

To be honest, I'm kind of surprised I hadn't heard a lot more about Bridges of Shangri-La before now. It seems like the kind of game that would get Reiner drones all frothy. Maybe since it's not from Reiner, it dropped under the radar, or maybe it just didn't make a big enough appearance early on. Whatever the case, this is a remarkably fun game. I really enjoyed it, and would definitely play it again.

What I would not do, however, is travel around Shangri-La without a parachute. Those Chinese-made bridges are seriously unstable.

Cons:
Pictures on the counters are a little bland

If you act quick, you can get Bridges of Shangri-La for like ten bucks. The game isn't at Dogstar Games, sadly, but ten bucks is still a total steal for a game this fun:
http://www.eaglegames.net/ProductDetails.asp?ProductCode=UBR106
Posted by Matt Drake at 4:30 PM

This one sounds like a lot of fun, but where is the body count I ask you? I will look into this one, $10 seems like a great price!

So with the only game on you want list being a Reiner I just have to ask - do you want it to play cause it is a good game, or you want it to review and make fun of? I really enjoy when you make fun Of Reiner and people get all flustered over BGG, what a great way to start the day :)!