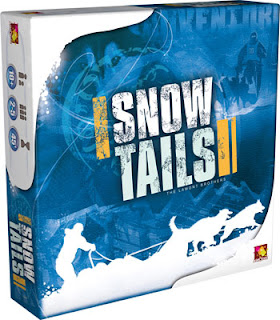 Fanboys (and I guess fangirls, though you don't see as many of those in board games) are weird. They tend to get upset about stuff that is sometimes really lame. Case in point - Snow Tails. When Asmodee announced that they were going to reprint this game and bring it to the US, they were going to rename it, probably because 'Snow Tails' sounds like an 80s Disney cartoon ("Life is like a sled race, here in, Snow Tails"). In all fairness to the geeks, the new name was worse - Too Mush sounds like you left your breakfast sitting in the sink all day - but there was a serious uprising, including a letter-writing campaign, and Asmodee decided it might be a good idea to stick with the original, nonsensical name, so that more people would buy it. I guess the answer to, 'what's in a name', is, 'money.'

So we got Snow Tails in the United States, and a lot of people were very happy, even though the name of the game sounds like dogs sitting in the snow, not running through it.

I don't really care what they call it, I'm glad Snow Tails made it to my side of the Atlantic. It's not the most exciting racing game ever (that would be Formula D), but it is a lot of fun. And it's crazy original, with rules that fit the theme, and a theme that perfectly fits the rules.

In most racing games, you roll some dice to figure out how far you go. Some of these games work better than others - Moto Grand Prix, for instance, sucks like the vacuum of space, while Formula D is totally bad-ass. But in Snow Tails, you're not racing cars or bikes or boats or whatever, you're racing sleds pulled by dogs. You don't get to just change lanes because you want to change lanes - you have to tell the dogs on one side of the sled to pull harder, and you have to be careful not to tell them to run you into a wall. Normally you would not have to tell dogs not to run into walls, but I guess if they're moving really fast, they get stupid. Of course, my dogs will almost never move fast, and they're still stupid, but they would also totally suck in a sled race.

The tracks in Snow Tails are single pieces that let you make a track pretty much any way you want, and unlike a lot of games where you haul ass, you only have one lap. There's a start and a finish and a lot of track in-between. You can play the basic sides of the tracks, which just have all the lanes cleared, or you can flip them over to dodge between the sides of ravines and plow over little trees. If you can find the Leap of Death expansion track, you can also jump your dog sled over the chasm, as long as you're moving fast enough. Since, as I mentioned, my dogs are slow, this is yet another place where they would ultimately fail as sled dogs.

All of this is fairly cool - nothing particularly revolutionary, but cool. Where Snow Tails really makes itself a contender in the racing game category is the way you move your sled. Each player has a sled card, with two dogs and a brake (plus, you know, a sled). You play cards numbered 1 to 5 on any or all of these spaces during your turn, and this is how you know both how far ahead you move, and whether you swerve right or left.

See, the total of both dogs minus the brakes is how far ahead you go. If you're going into a corner, you don't want to go too fast, or you'll flip your sled into the snow, break your collarbone, and then your cranky-ass dogs will probably eat you to survive. So you may want to stand on your brakes entering a tricky turn, and then let 'er rip for the straightaway.

But the thing is, you can't just change lanes. By playing different values on the two dogs, you create an imbalance that pulls your sled to the left or right. You absolutely have to change lanes to get through a turn, or you'll plow right into the wall, so you spend a lot of the game positioning yourself for a turn, sliding through as fast as you can, and then slamming the speed to beat everyone else to the next corner.

This dog-balancing game mechanic is fantastic, and it really makes Snow Tails a fantastically original game. It doesn't have the breakneck, burning-rubber feel of Formula D, but what it does have is a fun, engaging way to play through a race. You have to think ahead, do a little math, and be able to build just the right maneuver with your cards. And you need to be able to plan well enough to avoid banging up your sled, because then you'll have even fewer cards, and it will be even harder to pull through the turns and goose it over the chasm. You may end up going so slow that your dog team can stop to mark the trees.

I really like the card-playing feature in Snow Tails, but it is not without drawbacks. If you can't plan your move, tweak your cards to make a good play, and calculate your ending space in your head, you're going to take a while on your turn. And if there are four or five people playing, that's going to really slow down the game - not only will you have to wait for a lot more people to take their turns, but your plans will get wrecked all the time as you try to avoid slamming into other racers' sleds, and so you'll all have to take longer to take your turns.

Of course, this particular issue will not affect every group, and the theme in Snow Tails combined with the card-based movement is an absolute winner in my book. It's still fast enough to feel like a race, but with rules that make you think about what you're doing. Where I come from, that makes a pretty good game. And if someone crashes, you can pretend they were eaten by bears, and then you've got body count, which is great because real men play games where people die.

Pros:
Fantastic art
Great theme that meshes perfectly with the rules
Easy to teach to a group
Hits a nice balance between thoughtful and flat-out speed

Cons:
Requires a fair amount of careful planning, and you'll hate it if you can't do this
Could really bog down with too many players, especially if they're slow

Dogstar Games doesn't have Snow Tails just yet, but hopefully they will soon. And then you can get free shipping. I'll update this review with a link once they've got it listed.
Posted by Matt Drake at 10:06 PM

One really interesting part of the movement mechanic is that any of the cards that you play have to all have the same value, so you can't just throw any old card where you'd like. This adds to the need to plan carefully or get an evben more dented sled.

On condition barely you attempt online casino roulette, you will absorb what videopoker online is.