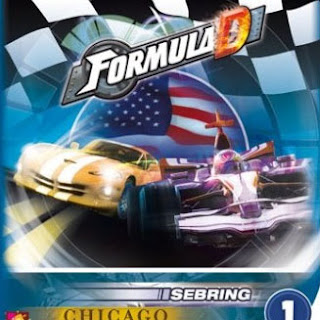 But just because you enjoy a game does not mean you have to get all the expansions. Basically, you've got four different groups of Formula D owners:

Of course, #4 is a very rare gamer. Most gamers get that 'gotta catch 'em all' mentality that means they have to spend hundreds of dollars to get 50 bucks worth of plastic, or own every single expansion, including the one that costs ten bucks for one figure because it comes with a felt bag. So if you're the gamer who has to have every Formula D track because you like the game, don't bother to keep reading - you don't need a review, you need to sell heroin for pocket money.

Actually, never mind, keep reading anyway. It's good for my numbers if you stick around a while.

For that discerning gamer, here's a review of the first Formula D expansion track. It's got a fairly interesting track called Sebring on one side, and it's also got some special rules for the street race around East Park, Chicago.

Because Sebring is far less interesting than Chicago, we'll start there.

The Sebring track seems designed to run most of the race in fourth gear. There are lots of straight-aways broken up with shallow turns, but the straight parts aren't long enough to roll that huge 30-sided die, so you're probably still going to end up cranky because you can't get to sixth gear (I always am. I don't play a race game to compete with my grandma. I want to haul ass).

Sebring isn't my favorite track so far. It's not particularly difficult, with no 3-rated turns and a lot of 1-raters. It only has one place where you're likely to get into fifth gear, and you can forget about sixth altogether. On the other hand, you'll probably be pushing a little more than you should, because this track is going to let everyone keep up fairly well.

When you flip the board, though, it gets awesome. Chicago is a street race, and there are lots more places to crash into other people, spin out of control, and drive your car off a bridge and into a river. There still aren't the lengthy straight areas that I love, but it does have a really cool twisty part with several intersections, and you can get a pretty good head of steam through there. Drive through an intersection while an opponent is coming through from the other direction, and you might both wind up missing a couple parts.

Possibly the most fun on the Chicago track is the drawbridge. This bridge isn't all the way closed, so there's a two-space gap, and if your car ends its turn in one of those spaces, you fall in the river. Thankfully, a handy crane pulls you out and puts you back on the freeway - but now you're in first gear and everyone else is flying past you like they had wings.

If you really like the technical aspects of Formula D, Sebring will probably appeal to you. There are several tricky decisions to make, but overall it's not as exciting as the crazy race through Chicago. Personally, I wouldn't pass this one - it's got something for any Formula D fan, and you know you're getting bored of flying off the track in Monaco.

Pros:
Sebring is a fairly tricky race that gets trickier with more players
Chicago is an awesome street race with lots of killer road hazards

Cons:
Sebring is a little too technical - I prefer the mad-cap hijinks of Chicago

You can get Sebring/Chicago direct from Asmodee:
http://www.asmodee-us.com/games/strategy/formula-d-sebring-chicago.php
Posted by Matt Drake at 10:45 PM

The prices for just another board are too prohibitive, especially since I don't see Formula D getting played nearly as often as some other games.

But if, like me, you play Formula D at every possible opportunity, and really want to see some different races, then this is the cat's pajamas.

Oh, but you should also check here:
http://www.boardgamegeek.com/geeklist/42710

I would like to thank you for the efforts you have made in writing this article. I am hoping the same best work from you in the future as well. In fact your imaginative writing abilities has inspired me to start my own blog now. Truly the blogging is spreading its wings rapidly. Your write up is a fine instance of it.

Very interesting article. Well when there is so much a new. Many thanks, for the information

As I know, the game is about automobile racing, formerly with an emphasis on Formula 1. The object of the game is to cross the finish line first and win the race.