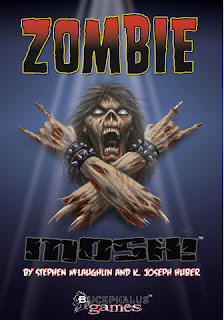 Market positioning is important for a game company. It's crucial to identify yourself with a specific kind of game. For example, when you think 'Fantasy Flight' you think of a different kind of game than when you think, 'Rio Grande.' Bucephalus Games obviously is aware of this, because as far as I can tell, they're trying to position themselves as the company that makes games you won't want to play more than once.

The latest trainwreck from Bucephalus is called Zombie Mosh. Now, before I go into depth saying rotten things about people I don't know, I will admit that the kind of person who wants to play a game where zombie rockers mosh until their arms fall off is probably also the kind of person who would enjoy a game with so very little going on. After the game, the players may want to do Jello shooters and smash beer cans on their foreheads.

The theory in this almost-a-game is that each of you is a zombie who likes very loud music. You all jump into the mosh pit and flail like crazy, and then your arms and legs fall off. The last zombie still flailing is the winner (unless you count everyone who didn't do drugs all through high-school and therefore knows better than to play Zombie Mosh in the first place - they are also winners, because not only are they living clean, but they're not playing Zombie Mosh).

Each round, you'll be dealt a couple damage cards, and then you'll have a few cards you can play on your fellow zombies to knock their faces into the dirt (unless the mosh pit is in a carpeted area, in which case you'll be knocking their faces in the carpet). These ultra-complex cards have such powerful descriptions as 'left arm' and 'head.' In case you're wondering, there are no special powers, no tricky combinations, and no reason to practice restraint or planning. You can play cards to block damage, or play them to cause it. That's it. That's all the decision-making you'll find. The game was evidently made for Iron Maiden fans coming down from three-day amphetamine benders, and so it tries to keep it simple, for the stupid.

To be completely fair, I should point out that there are advanced rules for Zombie Mosh, in case your thrasher idiot friends get tired of simply putting down cards that all do the same thing, and decide to wander off to find something to break. In the advanced version, you flip over your game board, and now your arms and legs fall off slower, unless they fall off easier. Yes, that is the advanced version. The optional rules, if you will.

I'm afraid this isn't a very long review tonight. The problem is, there's not much to the game I'm reviewing. I could spend a couple more paragraphs making jokes about junkies, zombies and electric guitars, but that would just be padding the review for word count. Rather than jibber for the sake of jabber, I'll just say that I cannot envision any circumstance in which I would want to play Zombie Mosh, ever again.

I've got a few more games from Bucephalus that I haven't played yet, including a remake of Dwarven Dig that I can't wait to try. I hate to pass judgment on the publisher before I've played them all, and I am really hoping Timestream will be enjoyable with a group. Because I'm starting to wonder if we ought to start a pool for the day Bucephalus closes up the shop, and I hate to see that happen.

Pros:
Pictures of zombies
Little cardboard skull counters you could probably use for something else

Cons:
Lame game play (and calling it 'game play' is being pretty forgiving already)
Ridiculous theme could have been interesting, but is instead dumber than a box of granite chips
Advanced rules are a complete waste
I would have to be badly brain-damaged to enjoy this game - and I like games where people die

If this is your kind of game, you'll probably drop into a joyful coma and pee into your Doc Martens at this picture:
http://www.desktoprating.com/wallpapers/music-wallpapers-pictures/iron-maiden-band-wallpaper-1024x768.jpg
Posted by Matt Drake at 7:14 PM

Most amusing thing about this? It was our best-selling new game at Origins.

Conclusion? Lots of people in Ohio had nothing better to do as a teenager/early-20something than get coked out while listening to Slayer!

I notice you've only really been trying our short games... what, don't have enough time for Dwarven Dig... or Michelangelo... or Kachina... or Timestreams? ; )

As for what we want to be known for, well, that's simple: not any one thing. We've got games that are short and fluffy (Zombie Mosh, Rorschach), games that you might play with your niece/son/grandkid (Living Labyrinth, Dogfight), games that you (Drake) might actually like (Suicide Bomber, Kachina), and even games for that Monday Night Football nut we all have somewhere in our family tree (Playbook Football). We really have no desire to be known for just one type of game.

Looking forward to more of your reviews!

I love when you share your views through the best articles.Keep
sharing and posting articles like these.This article has helped me a lot.Keep
posting this stuff.

Thanks mate... just dropped by. Will look for BIKE STN when we get to Seattle. Still in Buenos Airies.