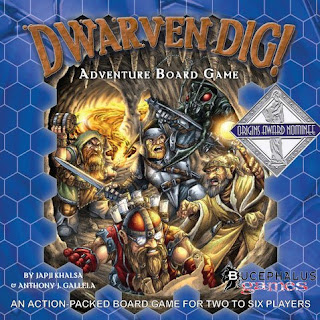 I was really excited to see Bucephalus Games re-release Dwarven Dig. Not because of how much I loved Dwarven Dig when Kenzer & Co. made it - kind of the opposite, in fact. That game was horrible in its original format. The components alone made it virtually unplayable, and the convoluted rules and lack of decent player aids made completing a game more work than I ever like to do on a Saturday.

The Bucephalus version of Dwarven Dig fixes a lot of problems. Like the old game had tiles that looked like they were made from recycled paper bags, and the new tiles are all glossy and double-sided. The old one had 'grit' that was basically whatever was left on the table after they cut all the flash off their metal miniatures, and the new one has silver glass beads. The old one had a confusing and painfully long rulebook, and the new one is in full color and easy to follow.

Not Fun:
Watering the grass

Opposite of Fun:
Being swarmed by fire ants while watering the grass

Opposite of Fun:
Drinking bleach

Not Fun:
Watching 'Real Housewives of Atlanta' on TV

Opposite of Fun:
Going to prison and becoming a Real Housewife of Block D

Happily, the new Dwarven Dig is much better than the old one. Unhappily, that's not saying much. Now, instead of being the opposite of fun, it's just Not Fun.

It seems like this game should be pretty cool. You've each got a party of dwarven explorers who dig their way towards the treasure chamber, dodging puddles of lava and gigantic cockroaches, among a myriad of other hazards. You can get in fights with your opponents' dwarves, and you can play lots of mean-spirited cards to break stuff and hurt people. You play grit tokens to improve your odds when you're trying to avoid being swept down a river, or just to get all bad-ass when it's time to rumble. It's got body count, so it should be at least mildly entertaining, right?

Well, OK, yes. It is mildly entertaining. Every turn, you'll dig through walls, earning grit if you fail and breaking down walls if you succeed. Then you'll see if you can survive the poison gas or giant cabbage (it's not really cabbage, but it sure is tough to figure out what it's supposed to be from the art on the tile). Since the board is randomly assembled from hexagonal tiles, you never know what might be waiting for you, so you'll try to keep your whole group alive so that you always have a bonus to your hazard checks.

The game kind of divides itself into two sub-games. The first part of the game, players don't really bother each other. It's too early to tell who might be ahead, and you've got your hands full making a mad dash for the treasure. But once someone closes in on the top spot, it's open season. It's not a bad idea to try to tank a few dig attempts just to let someone else be the target for all that pent-up aggression.

And then someone actually breaks into the treasure room, picks up a pile of cash, and all bets are completely off. At this point, the game pretty much breaks down into a mad dash to beat hell out of each other. You'll be desperately slamming each other, punching people in the face, scratching and biting - and that's just the players. The dwarves actually get killed.

There's a lot of random chaos in Dwarven Dig. That doesn't necessarily make it a bad game, but it doesn't tend to make it a big winner. You might be rolling like your dice were on fire, beating the odds left and right, and just one move away from winning the game entirely - and then some crap-weasel that you used to think was your friends pops in, kills half your dwarves and runs out of the room carrying your ill-gotten gains. It's a little frustrating, and not a lot of fun.

So my final verdict here is that the new Dwarven Dig is a whole hell of a lot better than the old one. If you thought the old one was decent, you'll love the new one. It's the same game, but streamlined and way prettier. But being better than really crappy is not exactly the kind of thing you can put on your resume, and for those of us who like games where the better player wins more often, Dwarven Dig is Not Fun, the way folding socks is Not Fun.

But it beats hell out of finding poisonous snakes in your sock drawer, so there's that.

Cons:
Total chaos and a lack of meaningful decisions drains the fun right out

The new Dwarven Dig isn't out yet. It's supposed to come out this fall. If you like mad-cap adventure games with lots of random violence, you might actually dig this one.
Posted by Matt Drake at 11:50 PM

Well, I actually now really want to play it. I think the theme can carry the game further than its shortcomings.

I think German-style board games are notable for often having rather less of a luck factor than many North American board games.

its interesting. Yesterday I played this game with some people with an older version, who i'd never played before, and we kept arguing about the rules. After a while, we found the rules were quite different, for example 4 poinnts for﻿ a farm insted of 3.