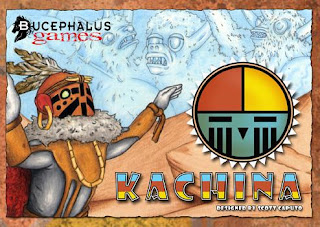 Rarely in my years of writing game reviews have I had a chance to so thoroughly reverse my position on, well, anything. Except for the time I called my boss an ugly retard - I reversed my position on that fairly rapidly, despite being right the first time. But aside from that, I don't usually have a chance to just completely change my mind (and even when I do have the chance, I often choose not to take it, because it's more fun).

Tonight I get that chance, and I'm taking it. Bucephalus Games has pulled out a winner, and I'm really happy. Since I just reviewed Zombie Mosh, and it totally blows, I was really delighted to be able to review a good game. Furthermore, maybe we can put off buying flowers and booking a gravedigger. Bucephalus Games might have a few years left in 'em after all.

Kachina is a basic tile laying game, but with some tricks up its sleeve so that it's not basic at all. You build a sort of crossword puzzle, taking turns laying down numbered tiles. In order to dominate a row, and thus score for it, you have to play a tile that winds up being the highest value tile in that row. So far, this is pretty easy. Just put down numbered tiles, and the highest one wins.

But then you add in the Special Powers (I capitalized them on purpose, even though you don't usually capitalize those words, because I wanted to make them sound like I have a booming voice. I don't, by the way). All but two of the tiles have extra crazy stuff they do. Like the clown makes every tile next to it a zero (making the big 8-point chief a little useless), and the ogre blocks other tiles from sitting next to it, and the hummingbird dominates if there's another hummingbird at the other end. It might seem like it would take a few plays to understand the special powers (forget the booming voice, it wasn't working), but you'll have them down pat before the game is half over.

And then you'll wish you had known them better to start. When you're cruising into the endgame, desperately wishing you could pull a warrior to swipe the wolf you need to beat the sun, you'll start to see why this is anything but a basic game, and you'll wish you had held on to those eagles and hummingbirds. And when you drop an ogre to block the chief who could beat the sun, you'll cackle quietly to yourself at your brilliance in stopping your opponents from scoring that huge row.

Once you understand Kachina, you'll be able to play several moves ahead. You'll pass up a chance to score so that you can steal a hummingbird with a warrior, then you'll set up a scoring chain that you don't intend to use for three or four turns. You'll cover a wolf with an eagle so that later on, you can take the whole thing with a chief. You'll block, and exploit, and bluff, and do lots of other things that really good games are supposed to let you do.

By the end of the game, the table will be covered with tiles in what sort of resembles the New York Times crossword puzzle, if you filled all the boxes with scary-looking dolls. You don't have to add up your points, either - you track them as you go, meaning that there's no 'OK, let's all do math for ten minutes' delay at the end. You just look over and go, 'yep, I win.'

A game with mechanics this intricately simple is often classified as filler, but that label would absolutely not fit Kachina. For one thing, it's really smart, and filler is usually a little on the light side. For another thing, it will probably take most of an hour to play, and if you play with that guy who can never decide what to do, it will take a whole hell of a lot longer (you may want to put that guy on a timer, and then shoot him with a stapler when he takes too long). This is not a game that you play just to fill time. It's a deep, intelligent game, and if you're just slapping down tiles while you talk football, you're missing it.

I am so very pleased to have played and enjoyed Kachina. I was starting to regret asking Bucephalus Games for review copies in the first place, and dreading more packages from them. But if they can pull out games this fun on a regular basis, there's definitely hope for them. Put away the crash cart - this one is still breathing.

Pros:
Cool art by Andy Hopp (check out his site. The guy is off the rope, or chain, or whatever the kids say)
Easy rules you could teach to non-game-nerds
Lots of chances for quick moves and long-range plans

Cons:
Definitely a theme laid over an abstract, but the theme works, so what the hell
Over-analytical players will make you want to hurl yourself into traffic, unless you're thinking clearly, in which case you'll want to throw them into traffic instead

I don't think Kachina is actually out yet. You can check out the Bucephalus Games site, and see if they update soon:
http://www.bucephalus.com/
Posted by Matt Drake at 8:12 PM

This is the first game where you have so completley convinced that I need to own this game, that I clicked the link on the bottom... unfortunatly, as you said, it doesn't seem to be out yet...

I am eagerly awaiting the release of this game...

Sounds an awful lot like Kingdoms...and that's a Reiner...and you HATE Reiner. ;p

Agree with you, I already play and It's good game.
Thanks for sharing.