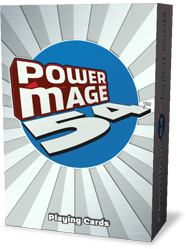 Usually, when small-press publishers send me small-press games, they're actually whole games. They might be printed on a home inkjet and mounted on a piece of cardboard, but they're whole games. They also tend to be innovative and interesting and something completely different.
PowerMage 54 is not particularly innovative or completely different. It's a deck of cards - you know, ace through king, four different suits, and a couple jokers. So you could use PowerMage 54 to play Canasta, as long as you had enough decks.
But while it's not all that innovative or different, it is interesting. Because there's also a game here, one with cool rules and fast card play. I admit to being surprised by the game, because I was initially completely un-wowed (that is not a word, even if I did hyphenate it). Once I played the game, I realized that PowerMage 54 is fun, and would be fun even if you couldn't use it to play Pinochle.
The concept is simple - you use superheroes to beat the hell out of each other. You start with 100 points of life, and as people play attack cards on you, that number drops. You can play defense cards to block damage, and healing cards to get better - but if you leave it there, it's just a lame combat game.
The reason PowerMage 54 is not a lame combat game is because of two things - thump cards and PowerMages. PowerMage is kind of a dorky name for superheroes, but since some comic book company actually owns the rights to the word 'superhero', the guy who made this game had to come up with something else. Most of the good words are taken by someone, so I guess the creator of the game had to make do with PowerMage, which sounds like the cast of Harry Potter on anabolic steroids.

All the face cards in this wacky deck are PowerMages - individual brawlers with super powers. Each superhero has a power, which you can use as long as you don't mind losing the card. But the real strength of the PowerMage cards is that without them, you can't play thump cards.
Thump cards are multipliers. You can use them along with an attack or defense card, as long as you can show a PowerMage to go with 'em. So these three-card combos are how you really lay down some pain - a lowly 10-point attack played along with a 10-point thump can take an opponent out of the game in one hit. Of course, unless you time this hit pretty well, your opponent can probably play a card combo to block, and walk away with a bruise over his eye instead of a gushing scalp wound and a shattered skull.
To really ratchet it up a notch, the thump cards have powers, too, but you still have to have a PowerMage to use them. So now about a third of the cards in the deck have cool abilities, but you have to decide if you want to give up one ability to exploit another.
I was thoroughly amazed at how much fun I had playing PowerMage 54. Not only does the attack/defense mechanism work really well, but the special powers create some really tricky timing elements. You might throw down a serious bucket of whoop-ass on one turn, but if you do, you may have just emptied your hand of all your good defense, leaving yourself wide open. If you know your opponent has the card that lets him turn your attack back on you, you have to lure that card out of his hand before you can throw in the real beef-eater attacks, or you might wind up laying in a bathtub full of ice and wondering how much your opponents are going to get for your kidney.
The main reason I was so surprised to have this much fun playing PowerMage 54 is that it doesn't look like it should kick ass. The art on the cards is simplistic and a little amateur-hour, probably because the guy who made the game also did all the art. You see this a lot in small-press games, but it's nearly always a mistake. It certainly is in this case. Hopefully the game can sell enough copies that the dude can afford to spring for an illustrator, because I think the main thing keeping PowerMage 54 from selling well is that it looks like a rookie production.
The price is certainly not keeping this game from being big - at only seven bucks for a deck, you could pay more for a piss-poor deck of novelty cards from a New Orleans street dealer (of course, those cards are very likely to feature nipples, which obviously increases their value considerably). The cards are nice - not ten dollars nice, but they're worth seven bucks, for sure. Add in the fact that you get a really cool game that could be repurposed to play Hearts, and there's hardly any reason not to buy this game.
I expect that a lot of people reading this review are still going to pass on this game. That's kind of a shame - PowerMage 54 is a fun game. But it's also understandable, because if nothing else, geeks tend to be total suckers for pretty pictures, unless they're the kinds of geeks who play ugly European games and then brag about how much smarter they are because they don't like things that are pretty.
Summary
Pros:
Neat, intuitive game with lots of opportunities for smart timing and slick plays
Decent-quality cards
Cheaper than it should be
You could use it to play Gin (and maybe drink gin while you play, thereby tripling the value)

Cons:
Art is below average, and is probably hurting the game

I highly recommend that you go to this website right now and order a copy of PowerMage . It's fun, easy to play, and best of all, there's violence:
http://www.powermage54.com/
Posted by Matt Drake at 6:03 PM

If you are looking for more review requests, i think you should review Pandemic. And as an added bonus it has an expansion coming out this month I think.

I will look into that. Z-Man Games is starting to be the up-and-coming company to beat.

Oliver, I'm glad I could point you in the right direction. This is a fun game.

And yes, I think it's Marvel that owns the trademark on 'superhero.' But I could be wrong.

I purchased this based on your rec Matt. I am happy to support U.S. indie game makers. However, this was a disappointment to me and my gaming group - 14 and 11 year old. I found it fun but not compellingly fun while the 14 found it too random with certain cards too powerful [swap health, for ex.] and the 11 year old felt the same way, though initially finding it fun. I never quite understood the description of a game being "too choatic" until this game. Monopoly the Game - our favorite card game and a game you like - has plenty luck of the draw elements yet you still feel a strong measure of control; strategy [at least short term, over a couple hands]; and meaningful decision.

looks like this game really fun. sad that I don't know hoe to play on it. teach me, somebody??