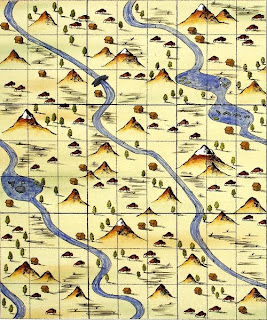 I review an awful lot of small-press games. Partly because I have a soft spot for the upstart entrepreneur forging his way in a field dominated by big games from big companies with big budgets, and partly because small-press people are often more willing to send me review copies (let's face it, when every third gamer on the planet is discussing Dominion, Rio Grande doesn't need me very badly. I got into this gig for free games, and small-press publishers get me more free games. Kind of a no-brainer). Because I tend to root for the underdog, probably like most people out there, I tend to go a little easier on them. That's not to say I'm going to lie and tell you I like a game if I don't (see Temple or Cambria), but I'm less likely to compare a game to retarded monkeys flinging dung if it comes from someone who is putting together a company on a couple hundred bucks and a student loan stipend.

I'm telling you all this because I want to make it clear that I know I show bias. I know that when it comes to reviewing small games, I'm about as fair and balanced as Bill Maher supporting a gay marriage bill. I know it, and I admit it, and in this particular case, that doesn't matter, because Caledea is easily the best small-press game I've ever played, and I don't feel any need to exaggerate or gloss the low spots just to play nice. In fact, it's a damned sight better than most big games you can buy with plastic pieces and linen cards. If I pick my favorite games of 2008, Caledea will be on that list (though I am more likely to pour salt in some old wounds and make a list of the greatest trainwrecks of 2008, just because I get a lot more personal enjoyment from being mean).

The thing is, if you base your buying decision just on first impressions, you'll walk right past Caledea without giving it a second look. It comes in a pizza box, for crying out loud. The board is a modular thing mounted on a sheet of foamcore board. The pieces are wooden cubes that the creators of the game painted by hand, and the gold coins look like they were stolen out of a six-year-old's dress-up pirate set. Hell, the cards aren't even all cut the same, and the rules are just a Microsoft Word document that looks like it was printed at the office inkjet.

But if you walk right past Caledea after reading this review, you're a piss-drinking dumbass. The guys who made this game are brilliant. It's an excellent, high-body-count, abstract wargame. It combines everything I love from both Ameritrash games and Euros. There's violence, maneuvering, tactics and strategic planning with quick turns, limited actions and resource management. It's like the Caledea guys got their Ameritrash chocolate in my Euro peanut butter. Turns out, these are two great tastes that taste great together.

I don't generally go deep on the mechanics in my reviews, because usually you can find some total sleeper of a game review that will bore you to tears with technical explanations, and those reviews save me a lot of trouble. They're dry as overcooked chicken, but they tend to be horrifically informative. Only Caledea is both new and small, so it might be a little tricky to run down a bland encyclopedia review. Just for you guys who love long, boring reviews (and I do read the comments at BGG, so I know you're out there) I'll give it a once-over so you get the idea. And before you fill up the comments section with inane whining, yes, I do know there are two reviews at BGG. Every now and then I do my homework.

In Caledea, you're trying to accomplish one of three goals. You win if you can kill every unit that's not your own, or if you can destroy all the other capitol cities, or if you manage to reinforce your own capitol and turn it into a city fortress. Rather than having every player start out exactly the same, each of the nine possible nations you can play has a different set of strengths and weaknesses. If you like to be aggressive, you can play the guys who haul ass around the board, and if you're a defensive player, you can play the team who can build cheap castles (these guys probably hire day laborers, so their insulation is probably full of holes and you know damned well that air-conditioner is going to fail the first time the mercury goes over 90). And every nation has a different preference for resources.

The board is a 9x9 grid broken into nine 'countries'. Each of these little countries posseses two resources, so one spot will have swamps and rivers, and one will have buffalo and hills, and one will have buffalo and swamps, and so on. Your nation will particularly value two of these resources, and the spaces that feature both of your resources (and there's only one such space per country, for a total of nine per board) will let you raise armies and levy taxes.

You're limited to a small number of actions per turn, and the first thing you'll want to do is get more resources. Only this can take a while, because you have to move your troops all over to grab locations. Building a castle is an action. Upgrading a unit is an action. Moving an army one space is an action. Because of this, turns go lightning fast, because you say 'these guys move. Your turn' and then your opponent does the same thing.

Combat is a simple dice-off, with the more powerful units having a better chance of winning (though there's still no reason a grunt can't clean a toilet bowl with the general's head, if he's lucky or defending on his home turf). Strength in numbers is important when you're aggressive, but since it's basically impossible to resurrect a dead soldier, you have to balance your desire to maim the other guy with your desire to not get your face kicked in. You posture, position, race for resources, strike where your opponent is weak, and otherwise do all the crap you would do in a more traditional wargame, but now you're only taking like ten seconds a turn and you're not fighting over a map of Europe.

As the game plays out, you'll expand all over while trying to limit your opponent's ability to do the same. Careful maneuvering can get you a massive bank of resources - but if you try to move too fast, your opponent will sweep in and destroy your capitol while you've got all your soldiers out running ROTC recruitment programs at the local YMCA.

My wife generally does not like wargames. She's a big fan of card games (see Monday's column) and she'll play a lot of lighter games with me, but her eyes glaze over if I bring out Memoir '44, and she'll run screaming from the room if I put down Squad Leader (not really - mostly she just says, 'not a chance, asshole' and I go back to my office to play crappy Internet games while she and the kids finish watching NCIS). And my wife loved Caledea. I seem to have pulled the golden ticket - I have a wargame I'll play any time, and what's even better, she'll ask me to play! I don't even have to do all the dishes or brush the dogs.

And as far as the crappy components go, I wouldn't change them for anything. The creators of Caledea are planning a more professional production in 2009, and I don't want it. The board is beautifully illustrated. The cubes are bright and colorful. The plastic coins might look a little cheesy, but you know what? Fantasy Flight would have made me punch out five sheets of cardboard. These plastic coins are so cool, I wonder why more games don't do that (just kidding - I really do know plastic is more expensive than cardboard). The rookie-night production feels pure and authentic. You can look at this game and know that the guy who assembled the game is passionate - he believes in what he's doing, and he wants you to know it.

Now, before you just run right out and get Caledea, let me warn you that I have gamer friends who I don't think would like it. It feels very Euro, even with bloody battles and dead people (both of which make up the main occurences in my favorite games). If you're a Euro-snob or Ameritrash bigot, Caledea will probably not be your favorite. If you hate luck in a game, allow me to be clear - Caledea is not chess. It's also not Carcassonne or Agricola or Risk 2210. It's quick-moving, simple, straight-forward and fun. Not all my gamer buddies will dig that. But I do, in spades.

So maybe you've reached the end of this review and you're thinking, 'meh, I don't like games from small companies, and I love eye candy'. If you're thinking that, you're a narrow-minded dingus. If I tell you that Caledea is the best small-press game I've ever played, and you're still hung up on the cheap packaging and the paper, pre-cut counters, then you deserve to go buy a case of Mutant Chronicles CMG and never even realize that you paid $600 for a giant plastic turd. In a time when games are getting more and more expensive, Caledea shines as an example of how games should be made. Small-press or not, cheap or not, Caledea is easily one of the best games I played this year.

Pros:
Incredibly fast
Easy to learn
Lots of options means tough decisions
You can finish a 2-player game in about half an hour
Innovative and deep

Caledea has everything I love in a game. If you want to love it as much as I love it, go here and get one:
http://www.caledea.com/
Posted by Matt Drake at 9:42 PM

Another good review. Thanks.

Well, now I have to go back and edit the whole thing. Would it be so hard for game designers to name their games something that I had heard of before?

This is a great game!! I also misspelled it the first time or two so you are in good company, Matt. :D You can also expand the game for up to 8 players with a second game.

I love the review! I must admit I used to do game reviews in the dry manner myself. That is actually why I quit. I got tired of writing them, and reading them. I want to get back to it, focusing on my fellow small press publishers and accessory makers. I just want to make it informative and entertaining.