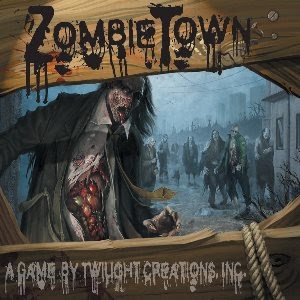 In the spirit of the holiday, I wanted to write about something that represents how I feel about the entire Christmas season. So I'm reviewing Zombie Town, because I live in fear of a long period of time where hundreds of mindless, violence-prone cretins swarm all over what would normally be a nice part of town, and reduce it to a massive catastrophic event. Zombie Town is kind of scary, too. The only way the game could be more like Christmas is if, after they ruin the town for everyone there, the zombies spend the next two weeks spending gift cards and returning unwanted salad shooters.

In Zombie Town, a bunch of really stupid people have decided to build their homes around a cemetery, where the dead come to life and maraud all over the surrounding area (a little like people who buy homes close to the mall, and then Christmas comes and the brain-dead shoppers maraud all over the surrounding area. Only the zombie thing would be better, because zombies don't listen to Bing Crosby. Or drive). The players are people just trying to survive by barricading their homes, finding frightened survivors, and trying to grab up as much real estate as possible at the kind of prices you can find in a zombie-infested cul-de-sac (that price being paid in bullets, rather than 30-year notes).

Every turn, you can move, then take three actions. These actions are things like rescue survivors (by playing a card from your hand), barricade a building (by playing a card from your hand), equip a gun (by playing - never mind, you probably get it), shoot at zombies (this is totally different, because now you play a card from the combat deck), or exploring a house to find cards to add to your hand. Several of the houses have special abilities, like the wood worker who will let you build barricades, or the nurse who will heal you, or the gun collector who will reload your weapons (though he won't loan you a shotgun). If this was a Christmas game, there would also be a fat guy in a white beard who stinks of whiskey and fondles your kids, but happily, it's not that horrifying. It's just zombies.

Every turn, you move some zombies. This starts out with just one a turn, but by the end of the tenth turn, every player is moving ten zombies, so you can put together a pretty nice little zombie horde and really blow through barricades and defenders alike (unlike Christmas, where you get just a few stupid shoppers early on, and then come Christmas Eve, every numbnuts on the planet tears through Wal-Mart to blow through discount racks and the toy aisle). If a zombie moves into your space, you shoot it. It's not hard, but you might run out of bullets before you kill as many as you might like.

You win the game by controlling houses, saving survivors and killing zombies. So one guy might make himself safe as hell, holed up in a big house with a blockade that could turn Britian into a third-world country, save a few dudes, give them guns, and wait out the apocalypse - but that guy will lose the game. The guy who wins just runs from house to house, rousting out the neighbors, defiling their toilets and claiming the homes for himself. And when you try to stop that guy by throwing huge hordes at him, he'll shoot them all, and all the zombies you fed him to try to make him die just end up giving him more points. It's a little frustrating, to tell the truth - but not nearly as frustrating as stopping in at Walgreens for a pack of smokes, just to spend twenty minutes behind some mullet-sporting dildo buying his kids off-brand Matchbox cars and novelty cigarette lighters because he waited until the last minute to remember that he's morally obligated to contribute to an artifical retail extravaganza. Give me zombies any day - at least with the undead, you're allowed to stick a kitchen knife through their brain pan to keep them from breeding. That hillbilly probably has eight kids with three different women, and you're not allowed to kill any of them.

The end of Zombie Town is ultimately unsatisfying. As you play the game, you're likely to spend nearly every turn thinking, 'this is a stupid game, but I'll finish it to see what happens.' And then you finish, and you ended up successfully defending your domicile for ten turns while some other jackaninny went door-to-door like a gun-toting Jehovah's Witness claiming every piece of real estate and mowing down zombies like they were paper dolls, and that douchebag wins the game, despite getting all his neighbors killed. This is the only way that Zombie Town is worse than Christmas - at the end of Christmas, you get a day off work and time with your family. At the end of Zombie Town, you just have to clean up 100 plastic zombies.

Of course, Christmas does tend to have nicer decorations than Zombie Town, which is a plus if you don't hate the sight of fake snow and cheap tinsel (but I do hate those things, so Zombie Town is still better). The cards in Zombie Town are little bitty things that are nearly impossible to shuffle. The backs of the cards are black-and-white and as cheesy cheap as the font the designers used to make the logo. The best components in the game are the 100 plastic zombies, which would be a lot cooler if they weren't all holding severed arms. The player figures all have retarded flattops. It's funny, because the illustrations in this game are great, and the graphic design looks like tenth-grade art class.

Looking at the game as a package, there really isn't much redeeming here. The game play is not particularly tricky, and is mostly just luck with some random running around. The cards scream 'CHEAP!' so loud, you'll wonder why they aren't asking you for spare change. The best thing I can say about Zombie Town is that it's mildly entertaining. No, wait, that's not the best thing I can say.

The best thing about Zombie Town is that it's not Christmas.

Cons:
Kind of a stupid game
Boring, small cards make the game more frustrating than it already is just because you're playing it

If I had one Christmas wish tonight, it would to regain the hour or so that I lost playing Zombie Town. Maybe this guy can get it back for me:
http://www.biro-art.com/zombie-santa.html
Posted by Matt Drake at 10:23 PM

I purchased this game today and just finished playing it [2 player] for the first time. Over all I thought that it was just ok. It was overly simple and the rules left me with questions.

However, if there were more people playing it could get interesting. I though that if a few friends played as teams of two, the teams could really dick each other over, adding a level of competition. Also, it wasn't mentioned in the rules, but if each person were to move the zombies near their opponents houses [rather than just moving them in general] it would make a better use of the TRAP cards and make for a more fun game.

Can't wait to play it with teams!

Wow! It's awesome blog post here.... really very interesting for reading..... I enjoyed it. Thanks for the sharing ....
Kamagra Online