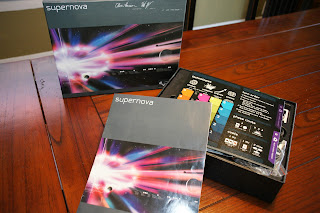 I have had it with irresponsible game designers. So many of the people who create our favorite games have virtually no concern for our well-being, or the impact their games might have on our lives. Would it be so hard to include a warning label now and then?

My most recent aggravating designer created a game called Supernova. It's his first game, but ignorance is no excuse for negligence. His game should have come with a warning label, something like I would find on a pack of cigarettes. I would encourage the publishers of Supernova to add the following copy to the cover of every game:

"CAUTION. Intense excitement possible. Risk of heart failure. Check with your doctor before playing this game."

Most games are fun, and many get me fired up and excited, but rarely does a game get my blood pumping so hard that my hands shake and my chest seizes up. Supernova was so thrilling and tense that I could literally feel my heart thumping in my chest (and when I say 'literally', I don't mean it like many ignorant people mean it, as though it meant the exact opposite of 'literal'. I cannot count the number of times I have heard someone say something like, 'I literally crapped my pants,' and want badly to say to them, 'then you should go change, you disgusting maggot.'). I mean, what if I have a bad heart? I could have died!

Worse yet, Supernova gives no indication that it will be too intense for some people until you've played a few turns. In this game of exploration and conquest in outer space, up to five different races are fleeing their solar system before the sun explodes. The first few turns are routine, nearly mundane, with players doing little more than just placing a few pieces on the board and moving towards the planets. At this point, players might have absolutely no idea how bad this game could be for anyone equipped with a pacemaker.

The first hints of palpitations might begin to occur the first time two alien races meet up in a battle. The entire battle system is conducted using battle cards, and while it looks a little odd when you read about the system, it actually works like a charm in practice. Battles are fast and intense, rife with strategy and timing. Pick a fight on your turn, and you may be too weak to defend yourself later. But if you don't pick a fight, you might allow an opponent to build up and fortify until he's going to run roughshod over you. It's a balancing act, and calls for some careful consideration. And when you do decide to fight, and you're waiting for the cards to flip, you may be just a little bit panicked - this could go very bad for you, if you're not careful. The apprehension can be dangerously thrilling. I heartily recommend milquetoast panty-waists avoid this game like an electric fence. Play Puerto Rico - that game is great if you can't stand excitement.

And it just keeps getting worse. As you play, you can't help but run up against your opponents. Resources are extremely limited, and if you want to get paid, you'll have to steal something from the other players. You can't let them sit there all peaceful, because frankly, you need that moon to get enough money to buy the tech upgrades and research you'll need to survive the supernova of your sun. And if they keep that planet the whole game, you won't have anywhere to put your people when your own solar system goes up like a road flare (besides, planets are worth a boatload of victory points). So you'll keep fighting, and defending, and pulling tricky moves, and you'll never know for sure what your opponents are going to do, and waiting for the semi-inevitable flank attack will give you seizure fits. Make sure you have your nitroglycerin pills close at hand, and write me to see when I'm filing the class-action lawsuit. By God, somebody is going to have to pay for getting me this riled up. It's just not safe.

As if everything up to now wasn't enough to give you a coronary, then you get into the endgame. The last couple turns are absolutely crucial - at this point, some players are trying to secure the gains they've made, and others are trying for a last desperate grab before the sun explodes. You might have a great plan in place, but overlook one element, fail to notice a player hoarding resources, ignore a seemingly innocuous card held in reserve, and you could watch your best-laid plans crumble to dust. And the worst part is, going into that last play, you're hoarding, and maneuvering, and sneaking, and scheming, and not only are you sure the other players are all doing the same, but you're hoping against hope that nobody notices what you're doing. If could be enough to induce arrhythmia or even aneurism.

To make matters worse, this game is long. It took us nearly five hours to play our first game, and the last two hours were nail-biters all the way. It could have gone any direction at nearly any time, and the smallest mistake would have been disastrous (and, in the end, it was). We not only suffered potentially harmful heightened blood pressure, but we had to live through it for two hours!

It doesn't even get better after the sun blows up, not right away. First you have to count up the scores. In our game, the scores were incredibly close - as in, we were all within one point of each other. The entire game could have been decided by one single, minute decision! Just one thing going the other way, and we would have seen a complete reversal. Even as we were putting away Supernova, we could not stop talking about it, and we were all agitated and over-excited. It's just not safe to allow people to unknowingly engage in activities that are so prone to extreme excitement.

So I'm angry. I'm calling an attorney and the local news and my state representative. This kind of foolishness has to stop. Sure, more responsible game designers might make more boring games, but they could also save lives. Supernova is so intensely exciting that it could actually threaten your health, if not your very life, and this madness must not be allowed to continue.

I'll bet I could get Jack Thompson on board with this.

Pros:
Every decision counts
You won't notice the time passing
Intense and incredibly fun
Absolutely gorgeous design (though some of the illustrations are a little odd)

Cons:
Could be life-threatening
Rules are a bit of a mess - I guarantee we did something wrong

If you think you have a strong enough heart to play Supernova, you can get a copy here:

Aww crap, now you made me preorder that game!

My name is Jason Smith and I'm trying to find out how to contact you. I own www.dogstargames.com and we're building a game site there. I loved your review of Draco Mundis, and wanted to know if I could place a link on our site to your review. I haven't figured out how to contact you directly on this site so I'm leaving a comment and hope you see it. -Jason - disasternecessities@gmail.com

You can reach Matt by the email link on the View Complete Profile on his main blog page.

Excellent review, Matt. Been looking forward to getting this game.

I remember hearing about this and then lost track of it. Thanks for posting the review and reminding me- it looks like a pretty intriguing game.

I was curious about the playtime as well for this game. 90 minutes to 5 hours is a bit of a jump. Have you played it a second time? Given your positive review I was hoping you had time to and could provide an update on the replayability and time for a more seasoned game experience.