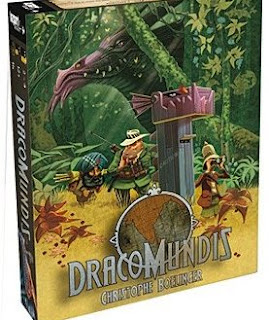 Here's a little disclaimer, right out of the gate - I have no idea how you do mescaline. I watched Fear and Loathing in Las Vegas, so I know it's a drug. I know it's illegal (though it might be OK in Amsterdam, where you can get stoned and score with a hooker and never have to worry about being caught in a sting and winding up on COPS). But I have no idea what mescaline really is, or how it affects you, or pretty much anything else about it.

What I do know is that mescaline is a funny name for a drug. So when I wanted to say that Draco Mundis is checkers on a controlled substance, I chose mescaline. Which one of these is funnier - checkers on speed, or checkers on mescaline (note that I skipped over checkers on vicodine, which would just be checkers, but played with Rush Limbaugh)?

In Draco Mundis, everybody has the same bunch of tiles. You've got explorers and journalists and sherpas and airplanes and lots more - but most importantly, you've got dragons. The goal is to rampage around the board, capturing as many of your opponents' pieces as you can, but especially dragons. And if you can sneak your journalist into the enemy campsite, that's even better. You move all these guys around, a little at a time, trying to capture pieces from your opponents. So checkers, but on drugs. Specifically mescaline, because that's funnier.

Every tile has different abilities, strengths, and movement. The machine gun truck can move one space in any direction, has pretty decent fighting power, and can blow up the enemy campsites. The hunter can guard a campsite to keep the journalist out, and he's a tough fighter, and he moves pretty fast. The dragons are slower than Christmas, but they're better fighters than anyone else in the game, so it's still not a good idea to tangle with them if you don't have to. If there had been a drug-dealing hipster to sell you your fix, that would have further reinforced the concept of checkers on mescaline, but I don't think that would have got through marketing, and the last thing we need is Jack Thompson and Hillary Clinton deciding board games are ruining America's youth.

The first thing you do, before you really start playing, is place all those tiles face down on the board. There are so many of them that the board is nearly full up. The only tiles that go face up are the explorers, and since you can't activate any of your other tiles without a character next to them, they're pretty important. If every tile was face down at the beginning of the game, you couldn't move anyone, and then you would just look at each other and call it a draw. Then it would be checkers on thorazine, which might be a big hit at a mental hospital, but would be less likely to draw players who had not yet been lobotomized.

In fact, the placement phase of the game is crucial to the game as a whole. Scatter your guys randomly, and the guy who placed all his tiles strategically is going to crush you like a beer can at a frat party. You want to hide your campsite to prevent your foes from grabbing it, and you could put the impassible tiger territory next to it, except that there's a 5 point penalty for doing that. It's kind of a tax on stupid - if you can't figure out not to put your campsite next to a place overrun with man-eating tigers, you deserve to be penalized.

Once the game gets going, it's pretty much a flurry of action-packed madness. Since you can only do two actions on your turn, you'll be done before you know it, and if you have set up poorly, there will be plenty of opportunities to get beat down before you can react again. You'll maneuver carefully, avoid leaving openings for opponents, and basically do all the stuff you would do in checkers if checkers was hopped up on hallucinogens.

There's so much to do in Draco Mundis that the first play should be considered a learning experience. Until you've actually finished a game, you're not really going to understand why you want to arrange your starting pieces in a diagonal line, or why you want to stick your campsite in a defended corner, or why the airplane is actually a cleverly disguised drug mule. You'll probably blunder through the first time, wondering why you decided to put this on the table. But stick to it, finish the game, and you'll discover that there's a huge amount of potential for clever play and flat-out fun.

A word of caution - if you hate Dungeon Twister, you're not going to like Draco Mundis. Cristophe Boelinger does not care for games of chance, and when he makes a game, there's no luck anywhere (also, he looks a little like a skinny Fabio, a fact which is not remotely relevant, but worth mentioning because most game designers look like George Constanza). Careful game play and tricky maneuvering are critical, because you absolutely cannot rely on a good roll to get you out of a tricky spot. The only way this game could be more Euro is if it was about farming (oh, and if there were no body count, but what fun would that be?). Unlike most Ameritrash games, if you lose Draco Mundis, you've got nobody to blame but yourself (and the other people at the table). And maybe the drugs - but hopefully, you'll let the game do all the narcotics.

Cons:
No luck at all (not a con for me, but you and I might not always agree)
Your first game might be a little rocky

I can guarantee that Draco Mundis will hit my table again. It's exciting and tense and clever and fun. You can get your own copy right here:
http://www.asmodee-us.com/games/strategy/draco-mundis.php
Posted by Matt Drake at 8:46 PM

Oh my god, there's so much effective information above!
here