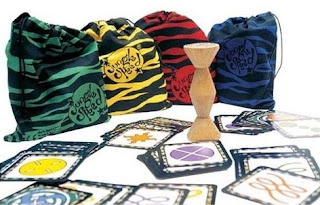 I was going to review Marvel Heroes tonight, but a reader reminded me that I haven't written about Jungle Speed for Drake's Flames yet, and since I got a copy when I was writing for Knucklebones, figured there's no time like the present. The game is a little old, but my kids still wear me out with requests to play it. So I'm blowing the dust off the bag and preparing to regale you with the mad hijinks of Jungle Speed.

First things first - yeah, I said 'bag.' Jungle Speed comes in a zebra-striped drawstring bag. There may have been a box at some point, but if I ever had one, I don't remember it. In the bag you'll find a bunch of square cards and a wooden pillar thingy called a totem. The cards are mostly just colored patterns and shapes, with a few wacky special cards to make sure someone goes home with a broken collarbone.

The reason you'll want to make sure your health insurance is current is that the game is almost entirely physical. You're supposed to play with one hand in your lap and the other on the table, but good luck getting my 12-year-old daughter to play by that rule. Most of the time, she's got one hand barely touching her deck and the other hovering right next to the totem, and if you try to beat her to the grab, she'll claw you like a psychotic wolverine. Good times.

The pile of cards gets dealt face-down in equal parts, so everyone starts out with the same number of cards, and then you start taking turns flipping cards. If you flip over the same symbol as the player before you, both of you have to try to grab the totem. If you're too slow (perhaps because your hand is already bleeding and you've got a broken index finger), you have to take all the cards from the other guy and add them to your own draw pile. Since the object of the game is to dump all your cards, competition to grab the totem can be hectic (in this case, when I say 'hectic', I mean that when it comes time to grab for the totem thingy, the level of violence can parallel that seen in dockside bar brawls or professional wrestling. Unless your kids are better behaved than mine, in which case you probably get a lot more sleep).

If you grab the totem when you don't have a match, you have to take all the cards from all the other players. Plus you have to live with them saying, 'Ha, Dad! You're dumb! These don't match!' You can remind them that they rely on you for food, but my kids know that's an empty bluff. Hopefully you can finish the game quickly and then play them at something that requires patience and intelligence, because then your kids will get all squirmy and you can beat them so badly that they have to wash the car just to get you to stop mocking them. But don't feel bad for them - they didn't think it was such a raw deal when they were pointing at you and making monkey noises.

Every now and then, a player will flip a special card, and then the rules change. Like you might have to all play at once, or you have to match colors instead of shapes, or you all just grab for the totem at the same time. This last one is likely to result in some pretty cool scars, especially if you're still having trouble persuading your kids to clip their fingernails.

That's pretty much it. You keep going until one person runs out of cards, and then you put the game away (handling the cards carefully to avoid getting blood on them) and go wash out your wounds with hydrogen peroxide. You may also want to take this opportunity to set any broken bones or (worst-case scenario) call an ambulance. Don't worry, the ambulance won't be for you. It will be for whichever kid grabbed the totem last, leaving you with a giant pile of cards while they do an end-zone dance and call you a horse's ass. Kids sometimes tend to forget that you're bigger than they are.

In all fairness, we've played Jungle Speed at my house several times, and have not yet had to bandage any wounds. Very competitive children (or very competitive adults who would rather slap the crap out of their children than lose a game) have caused more than one accidental slap on the hands, and once my daughter did scratch the hell out of me, but that's more because she chews her fingernails until they're all like jagged glass. It's actually a fast, interesting, intense game that you can finish in a hurry and put away. Or, if you're playing with my kids, you can finish in a hurry and then shuffle the cards and play again, just to keep the little brats from complaining so loudly that the neighbors call Child Protective Services.

Cons:
Incautious play can result in minor injuries
Not a huge draw for a bunch of adults

If you have kids you want to entertain with a game about paying attention and then beating each other, Jungle Speed could be a lot of fun. You can get it here:
http://www.asmodee-us.com/games/family-games/jungle-speed.php
Posted by Matt Drake at 7:16 PM

heehee good review there Matt... I'll let you know whether I have any war wounds... my kids and your kids need to get together and go bowling ... they'd have lots of things to talk about !!! LOL

Matt - That is the laugh my ass off, funniest review that I have read in a long time. Thanks, man.

broken fingernails are only the least of the injuries we've had with this game, sprained fingers are much more common