Board Game Review - Order of the Stick 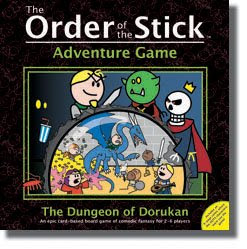 I read a bunch of webcomics. I like the idea of getting something for nothing, even if it's just five minutes of entertainment, three times a week. And one of my favorite webcomics is Order of the Stick, a D&D spoof that manages to be regularly hilarious while telling an exceptionally exciting story. And because I also like the idea of supporting someone who is willing to entertain me regularly, I picked up a copy of the Order of the Stick Adventure Game (OK, technically, I swapped a dice tower for it, but it wasn't free, so that still counts).

But if you do read Order of the Stick, the art is probably enough to make you smile, all by itself. And the Dungeon of Dorukan should be familiar - it's where the dysfunctional group of adventurers first battled Xykon. And now you can join in!

Each player adopts the role of one of the main characters in the comic, and then the whole party descends into the dungeon, killing monsters and stealing their stuff. Players can help each other in exchange for loot, and they can also totally hose each other by playing big bad monsters, stabbing them in the back, and otherwise accelerating their opponents' untimely demise. Each character plays very differently, thanks to the customized schtick decks. Elan, the most helpful dude in the game, has lots of powers that let him his pals, which gets him lots of loot. Belkar, on the other hand, has plenty of opportunities to hurt his friends and steal from them. Each character feels and plays differently, and they all feel very true to the comic.

The monsters in the dungeon are as varied and goofy as the monsters in the comic. You might fight the two-headed puppy named Fido/Rover. You might have to battle a Lumber Hulk, or a beige dragon, or those two red cockroaches who do a running commentary like the two old guys from the Muppets. And the iconic villains are in there, too - the entire Linear Guild is represented, and they have powers that let them help each other out.

Monsters enter play when you go into an empty room, and your opponents get to decide what you'll fight. If they're feeling generous, you can face a cowardly kobold. If you recently irritated them, they might just stick you with an ugly ogre and a horde of undead. Then you fight them, and if you win, you get some loot.

The game uses an interesting mechanic for making you want to help your opponents. It's handy to kill a monster, but you have to be paid for your assistance, and the more you get, the more your help is worth. Sometimes you'll be offered a reward you really want, and sometimes it might be more fun to turn down the reward and watch your opponent get pummelled. This is a total blast - sometimes you'll offer to reward someone with a great loot card and then swipe it out from under them, sometimes you'll step in to help and turn coat to help them get skewered, and sometimes your devious plots will backfire and you'll wind up broke, wondering why your butt hurts.

As the game progresses, the dungeon goes deeper, and when you reach the bottom, you must find and defeat Xykon. Only Xykon was holding the whole place together, so once he dies, the whole dungeon starts to collapse, and it's a mad dash for the surface. Once there's only one player left in the ground, the game ends and you tally up your points. The person who had the best overall performance (measured in several different ways, including how much money you have and whether you were the one who beat Xykon) is the winner. This is not always the player who killed the big bad guy - for one thing, that guy is probably going to be the last guy out, and for another, if you play well, you can get by just on ill-gotten loot and a flashy smile.

My kids love Order of the Stick, so they were both excited to play. We made a mistake, though - we started at 9:30 at night. I told them it might be a while, but they didn't seem to mind. By midnight, though, neither of them really gave a crap whether Vaarsuvius was a dude or a chick. They just wanted to go to bed. And we were playing the short game - if we added another level or so, the game could have gone on another hour or two. As it is, they were almost grateful when I won, so they could go to bed (one of the best features of their getting older is that they go to bed on their own. Of course, this feature is offset with moody outburts and an assumption that I am a complete idiot, so all things considered, I probably wouldn't mind having to persuade them to sleep now and then). This is not a game you play if you're short on time.

This is also not a game to play on a small table. I have a gigantic kitchen table, and we filled that sucker. The dungeon takes up an inordinate amount of room, and then you add schtick cards, loot cards, battle cards, stairs cards, defeated monsters, traps and other stuff, until your table looks like the catch tray for the world's biggest paper shredder. It took me like twenty minutes to pick up all the stuff. There are just lots and lots of components, most of them cards, in something like ten different decks.

If you're a fan of Order of the Stick, and you like adventure-style games, the Order of the Stick Adventure Game should be your next purchase. It will make you laugh, and in fact, it encourages you to laugh. There are exciting, tense battles. There are hilarious monsters. There are completely horrible back-stabbings. My kids were delighted to go to bed, but they both said they want to play again tomorrow. That's a winner in my book.

Pros:
Exciting and fun
True to the comic
Lots of funny moments
A ridiculous number of components

Cons:
The short game takes at least two hours. The long game could go until dawn.
Lots of rules. I'm pretty sure we played some part wrong.

I highly recommend Order of the Stick for anyone who likes a good dungeon crawl game. Get it here:
http://apegames.com/Merchant2/merchant.mvc?Screen=PROD&Product_Code=APE0600&Category_Code=OOTSG
Posted by Matt Drake at 10:32 PM

Good review. I find the OoftS could easily be solved by just giving everyone another starting stchik or two. Helps speed up the game which is what really drags the game down.

I started to read webcomic since 2 years a go. I really enjoyed it. My favorite webcomics are the Tailybones, Dragon Tails, and Hellbound. They all have excellent art and tend to be interesting plus entertaining.

This is good site to spent time on .I just stumbled upon your informative blog and wanted to say that I have really enjoyed reading your very well written blog posts. I will be your frequent visitor, that's for sure.