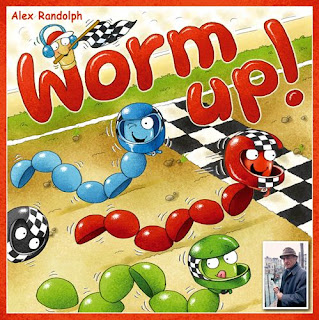 One day, aliens are going to come to the planet long after we've all died out. They'll be exploring the ruined husk of our planet, and using the odds and ends they can find to determine what kind of society we had. If they find Worm Up, they will assume that we were pretty darn stupid.
Worm Up is another in a long line of reprints coming out of Gryphon Games. In this latest rehash, players will partake in a particularly asinine activity - they will race worms. When the aliens see this game, they will probably deduce that humanity died out because neither our brains nor our bodies moved very fast, and so we were actually capable of being entertained by worm races.
Each player's worm is made up of a bunch of wooden balls, only they're chopped in half. These half-globes all sit in a line that you tell people is a worm, even though you know they're actually just a pile of wood buttons laid out in a line.
To move your worm, you bid a movement number, which you indicate by turning a humongous die with numbers on it. If someone else bids your number, then you don't do a damned thing. If you're the only one bidding your number, you get to take the those wooden beads from the ass end of your worm and put them in front of his head. That's how worms move, too - they just suck their butts up through their faces. It's quite fascinating, or it would be, if it actually happened that way.
If this were one of those reviews where I just tell you the rules, I would be done now, because that really is most of the rules. Fortunately for you, that's not all I do here. For one thing, I haven't made any boob jokes yet, so I need to work those in somewhere. I also haven't reached the part of this review where I tell you that I actually really liked Worm Up.
OK, yes, the game is stupid. It takes almost a whole minute to set up, then you can finish in ten more minutes, then you sweep everything into the box and you're done putting it away. There aren't very many decisions to make, outside trying to second-guess your opponents. But even without a lot of flash, or excruciating decisions, Worm Up is cute and a lot of fun. And that's not something you can say about a lot of games (which makes me wonder why those other games get made in the first place).
When you think you're the smart one and you bid the X, and then someone else does, too, you're both going to slap your foreheads and groan (make sure you slap your own forehead, and not the forehead of the other guy. This is a pretty important consideration). When you get one turn where you're leading the pack, you might twist your worm so he's cutting off all your opponents and forcing them to swing wide. You can move the finish line to get it closer to your worm. You can laugh at the light silliness of the game, and then laugh at yourself for playing it.
I was dreading Worm Up when I broke it out. Like the alien archeologists, I was sure the game was dumber than a bag of hammers. I could only surmise that babbling idiots were responsible for its creation, and that someone was playing a joke on me. But the rules and pieces don't show the goofy charm of Worm Up. To understand how much fun you can have with a ten-minute game about racing worms, you really have to try it.
If the aliens try it, they're going to decide we knew how to have fun. But they will still think we were stupid for playing a game with wooden nipples.
Summary
3-5 players
Pros:
Incredibly quick to set up and play
Fun for all ages
Light and silly and charming
Cons:
Kind of dumb
You can get yourself a copy of Worm Up at Noble Knight Games, and then you can also feel stupid while you have a good time:
GET WORMS
Posted by Matt Drake at 4:16 PM

Sounds like Whirley Ball - Looks really dumb but when you try it you realize how fun it is!

I'm seriously beginning to believe that you have a formula for your review.

Oh but do not take my comment for negative, for I dost love thee and thy reviews. They has the awesomeness.

And in all fairness, I was going to skip the boob joke, but the little half-globes do kind of look like colored wooden nipples.