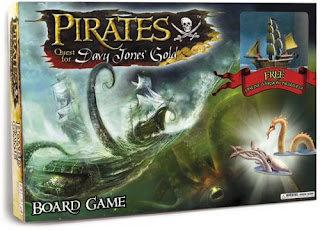 If you're a game nerd, you've probably at least seen the pirate game from WizKids, the one where they print punch-out pirate ships on credit cards and then you put them together yourself, usually after breaking one or two of the masts in half. Many of you have probably played that game, too. Some of you even think it didn't suck, but sadly, you would be wrong, because it did. The pirate ships were fun to build, though, if you could figure out how to get them together without snapping pieces into little plastic splinters.

When I picked up a copy of Pirates: Quest for Davy Jones' Gold, I didn't expect it to be particularly impressive. It was a board game version of that popular collectible game, and so I was prepared for it to be dull, unimaginative, short on strategy, long on arbitrary die rolls and prone to fragile bits flying across the table. I did not expect the pieces of the game to be crappy, though - I used to buy the boats to put them together, just because that part was neat. So the absurd vinyl play mat took me by surprise.

Right out of the gate, simply so that we could play, we had to mod our game. In this case, we had a large piece of plexiglass that we put on top of the plastic mat where we were supposed to play. This worked very well, which was good, because otherwise our pirate ships never would have been able to cross the Grand Teton mountains rising out of the ocean at every spot that the vinyl son of a bitch wouldn't lay flat. If you buy this game, consider also removing a window from your house so that you can slap the glass down on top of the crappy plastic board.

The game itself is basically just the collectible version, but with training wheels. All the ships have the same movement, and many of the other game elements are trimmed out to make it easier for first-time players. You each have two ships, and you visit islands and try to pick up treasures. Some of the treasures will tell you to fight Davy Jones, who is a total bastard and will beat the crap out of you nine times out of ten. Some of the treasures tell you to go kill sea monsters, which is really hard to do because they get a dozen chances to hurt you before you can even get off your first shot, unless you're the guy who can move then shoot, in which case you'll probably miss because your cannons suck.

The worst thing about this game is the curse token. There are actually four of these, and when you draw one, all your ships travel from wherever they are and wind up stuck in a pile of seaweed, or lost in a fog bank, or run aground on a reef. Then you have to sit there for the rest of the game, and your turn consists of rolling two dice and then using very harsh language because you still didn't roll doubles. These curses add absolutely nothing good to the game, and serve only to frustrate and irritate. The creators of these curse tokens should be dragged behind a plastic pirate ship over a vinyl mat until they get friction burns on their ass cheeks.

I do remember that while I did not much enjoy the collectible version of this game, it still had some depth. Not a whole hell of a lot, mind you, but it had some cool play options, and you could spend a fun couple hours building a good fleet. I guess in order to appeal to the new Pirate purchaser, WizKids decided to remove the part of the game where it was fun. The strategic element of choosing your ships is completely gone. The part where you tactically maneuver and try to take out the enemy ships is watered down to a thin, tasteless gruel. The best way to win this game is to rush to the island, fill up your ship, and be luckier than everyone else. It's not fun. The ships are cool, though.

I can't say with complete sincerity that I was disappointed in Pirates: Failed Quest for Something Interesting in the Box. But I wasn't disappointed because I wasn't expecting very much, and that's what I got. I still love the pirate ships, and the sea monsters were very cool. The game could be fixed to actually be fun, but you'll need to laminate the board, remove the curses completely, nerf the sea monsters so they don't completely cripple the players who have to kill them, and give people a good reason to shoot each other instead of just rushing for treasure like contestants on a stupid reality television show. But I don't really have the inclination to fix a game when I have dozens of games that I already love, and that don't need repairs, so it seems this pirate game is going straight to Davy Jones' Goodwill Donation Box.

Pros:
Doesn't matter how many I already have, I love building those plastic pirate ships
The kraken and the sea serpent are totally bitchin'
Lets you get a taste of the collectible game without having to buy a case of boosters

Cons:
Weak rules remove all the fun parts and keep all the bland parts
Stupid vinyl play mat is too small and won't lay flat
Desperately needs a good game designer to fix it

If you would like to try Pirates: Davy Jones' Stanky Crotch, go to a thrift store. If you don't find it there, don't get it somewhere else. If you pay more than three bucks, you're going to be pissed.
Posted by Matt Drake at 11:22 AM

I have long been a proponent of the Wizkids "Pirates of the XXXX" games, yet I completely agree with this review.

It had a high initial price point of $25 when it first came out, had a tie-in redemption to the now defunct SOE Pirates game (site finally went down a week ago)and basically stinks. It has promotion written all over it and the best promotion the Pirates game could ever have was buying 2 boosters packs and playing it that way.

That was the original practicality of the game, was that it was a game in every pack.

While the CMG version of pirates is not the most deep game by any means, it boggles the mind why they messed with the rules at all to make this turd.