I've got a special treat for you tonight - a guest reviewer! Come to think of it, since that means I didn't have to write the review and got someone else to play the game for me, I think that's a treat for me. Anyway, my old man really likes Thunderstone, and I don't. So I gave him my copy of Thunderstone, and then Alderac sent me expansions. I gave him those, too, because he lives like 1500 miles away and I can't exactly borrow it back for the weekend.
So please give a warm welcome to our guest reviewer, who is doing me a big favor and writing my column for me tonight - my dad! 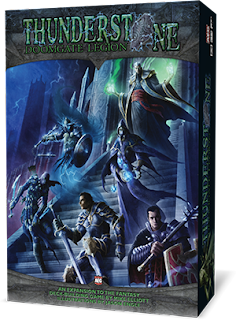 Nice review! It's interesting to see a similar style in your writing, although I don't think I've seen "Jeez Louise!" in any of Matt's reviews! Thanks again for the review and I look forward to more in the future!

Yeah, my old man isn't quite as comfortable with profanity or hooker jokes as I am. Maybe because he used to be a Baptist preacher.

I loved that some of his turns of phases are so obviously the origin of your style of turn of phrase. Good review and still entertaining.

Now we know where Matt took his sense of humor !

If only I'd have been able to get my dad to play games with me...

Excellent review! Inspired me to pull out TS & Doomgate Legion and place some solo last night!

Man I wish my old man played games ( well, games other than *golf*), and was half as cool as your dad clearly is. :D

He'll be reviewing Dragonspire, at least, and I'll see if I can't bend his arm to write a few more, if he's up to it.