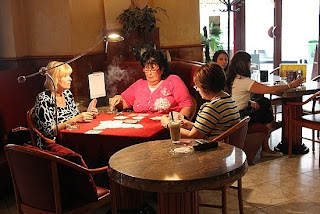 I played this non-stop in high school, and then again after I graduated from college (I couldn't sell it to the folks at my alma mater). We had about 10 people to play in rotating teams, but alas that has dwindled down to a never-able-to-get-together four, so it's been years.

However, I do know that there are a few different varieties--playing with different number of cards, for example--as was evidenced by a disastrous attempt to pick up a game whilst on vacation.

what are the ladies in the photo playing? There are only 3 of them?

They're playing 500, but the fourth player had to go to the bathroom. While that player was gone, the other players are looking at her cards and stealing the good ones.