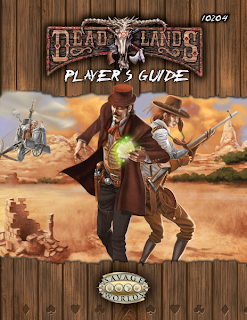 It's funny, for a guy that grew up playing roleplaying games and amassing a considerable collection of oddly shaped dice, I actually enjoy a very small number of roleplaying games. Some are too much work, and others don’t have enough meat on their bones. Some are just board games with options, and others have so much drama and baggage that they should be played on a headshrinker’s couch. Some have convoluted and twisted rules that try too hard to fit onto the setting, and most make almost no effort to make rules that fit the world you’re supposed to be visiting. And of course, whole bunches of them are just stupid (no offense to anyone who actually really loved RIFTS).

That leaves me with a good-sized pile of games that I tolerate, a few I enjoy, one or two that I really love, and just one that I will play nearly any time I have the chance. That one game is Deadlands. Between 1996 and 2001, I procured every book ever published for classic Deadlands, and didn’t stop buying them until they started making d20 and GURPS crossovers. Then I cried a little (but only on the inside), because making a d20 version of Deadlands is an affront to all that is holy.

Deadlands is a brilliant mix of dark and campy, horror and sci-fi, monsters and cowboys and steam-powered robots. It’s a game where your heroes can get stronger and faster, but they can also lose limbs and develop debilitating speech impediments. It gives me everything I want, sacrificing nothing to deliver great stories, exciting scenes of derring-do, and more flavor than a Kansas City barbecue joint.

If I had one beef with classic Deadlands, however, it was that the game tended to drag if you fought more than one bad guy at a time. I recall one battle against mud creatures that slowed so badly, I would have sworn the slop critters had left the game and were actually in our living room, making every turn take three times longer than it should. I loved the game, but I regularly found myself cheating to make stuff happen faster (I ran the game, so I could fudge a die roll now and then and just say, ‘wow, you got him in one shot!’)

I was hopeful when I decided to check out Deadlands Reloaded. It’s the same setting I know and love, but now it uses Savage Worlds, which runs like a road runner on amphetamines compared to classic Deadlands. On the other hand, I was worried that trimming down the rules meant I was going to lose a lot of the flavor that made Deadlands a wonderful marriage of setting and rules.

It turns out, I had nothing to worry about. For starters, Deadlands Reloaded dumps a few of the problems I have with Savage Worlds and goes back to its roots. There are no ‘bennies’, which I feel compelled to put in quotes because I’m embarrassed to be typing the word at all. They’ve been replaced with fate chips, which is as it should be, because fate chips are Old West, and ‘bennies’ are ugly guys who mop up after wild nights at the gay bar.

I did kind of like how classic Deadlands gave each player a roll at the beginning of each round, and then you got cards based on how well you rolled. So if you had a very high Quickness, you were likely to get to act many times in a round, and if you were slower than Christmas, you got to go once. However, this was also the main reason classic Deadlands is so slow, and so when Savage Worlds replaces it with just dealing out a single card to each player, I can see why that happened. I don’t like that my lightning-fast gunslinger has to count on getting lucky if he wants to shoot before the bad guy can pull a weapon, but on the other hand, there are edges he can take to make sure he gets a good draw. It’s not quite as slick as the original, but it gets the job done.

Deadlands Reloaded also does away with many of the cool spells, and kind of lumps them all in together. I actually really liked many of the hexes, miracles and other arcane madness, and don’t really like that mad scientists just build devices that cast spells. That seems like too great an effort to make everything work the same, and I don’t want everything to work the same. I want the hucksters to throw a soul blast while the mad scientist calibrates his fluctuating defrabinator and the preacher sings Glory Hallelujah while swinging a hickory stick and firing a righteous shotgun. That still happens in Reloaded, but now it all basically works the same way. And that’s not as much fun.

Anyone who knows classic Deadlands knows how every different character type had his own book, from the hucksters and voodoo priests to the Texas Rangers and the walking dead known as harrowed. Each book was chock-full of specialized powers, arcane knowledge and secret handshakes. Half the fun of taking one of those specialized characters was finally being allowed to read through the book and find out what you had been missing. Unfortunately, Reloaded distills all those crazy archetypes into a few pages in the player’s book, which again, is not as much fun.

Ironically, all those things I loved about classic Deadlands were also its biggest failings. Information overload became almost impossible to manage. When I had four players, and they were a huckster, a preacher, a mad scientist and a harrowed, I had to know where to find rules in almost 400 pages of books. After a while, it became a running gag – ‘a shaman, a nun and a harrowed walk into a bar. Hold on while I look that up.’

Deadlands Reloaded may have cut a lot of the stuff I loved about classic Deadlands, but at the same time, it trimmed the fat until Deadlands is a lean, mean, Old West horror machine. I can run a zombie invasion with a terrified town and a posse of deputies in half the time it used to take me to fight two drunks in a saloon. When a player asks me how long it will take to climb under the burning wreckage, I can tell him so fast, I still have time to send a trio of angry prairie ticks to rip off his face when he’s stuck under a fallen rafter. I don’t have to work anywhere near as hard I used to, and that makes running Deadlands a lot more fun.

I wouldn’t say that Deadlands Reloaded is the perfect replacement for classic Deadlands. I like the flexibility of the old system, and the way everything about the game oozed Weird West. You could meet Doc Holliday, get in a shootout with the Clantons, then have some nightwalking demon scare you so bad you soiled yourself. You can still do that in Deadlands Reloaded, though, and now those two shootouts won't take the better part of three hours. Now you can kill Ike, run from the manitou, find its weakness, change into clean drawers, and go back to bury the bastard before everyone gets tired of asking if it's their turn yet.

I was on the fence about whether I liked the new Deadlands better than the old, to be honest, until I considered a few things. First, those long fights can really suck the fun out of a game night. Second, there's nothing stopping me from adding some of my favorite parts back into the game. Third, none of my current group of players made characters with any kind of supernatural ability, so until somebody croaks (and possibly comes back), I don't have to worry about asking anyone to build poker hands to throw unholy death at their foes. Finally, the Pinnacle website has a PDF specifically made for converting old Deadlands stats into Savage Worlds - and that means I can still use the bookshelf full of classic books.

And I guess that brings me to my final conclusion. Deadlands is my favorite RPG ever - and I like Deadlands Reloaded better.

Pros:
Fast and lean
Rules are easy to learn and easy to remember
All the flavor, half the calories

Cons:
Not really all the flavor. I lied about that part to make a diet food joke.

Would deadlands:reloaded a good option for getting into RPGs for a group with no rpg experience?

To further explain: I am rather new to the boardgaming and over the last 6 months have been introducing my friends to a large variety of games. Games like Tales of the Arabian Nights and Betrayal at house on the hill have been very popular. So I'm very interested in taking the story telling to the next level and trying a new type of gaming. If you have any suggestions for RPGs that are good for a rookie GM and players unfamiliar with RPGs, I'd really appreciate the help.

Deadlands Reloaded is the first RPG my son has ever run. He's playing with his high-school buddies, and they're having a blast.

Here's what you should do, if you want to give it a spin.

1) Go to peginc.com and check out the downloads. Get the quick start Savage Worlds rules, one of the one-page adventures, and some pregenerated characters.
2) Play that quick adventure to get a feel for how this whole thing works.
3) If you're still digging the idea, buy the Savage Worlds core book and the two Deadlands Reloaded books (player's guide and marshal's handbook). If you're not prepared to write your own adventures, you may also want to buy a published adventure.
4) Read all those books, make a character or two, and then invite some friends to make a few of their own. Encourage them to avoid arcane backgrounds to start, and for God's sake don't let anyone start off harrowed. Once you've got a couple game nights under your belt, you can pour it on and let everyone try out hucksters and kung fu wizards and what-not.

Deadlands is my favorite RPG of all time, so of course it gets a ringing endorsement, but for a starter, I also highly recommend the Dragon Age RPG. It's very simple, even compared to Savage Worlds, and my family loved it.

Will have a closer look at deadlands and Dragon Age.