Expansion Review - Railways of the Western US 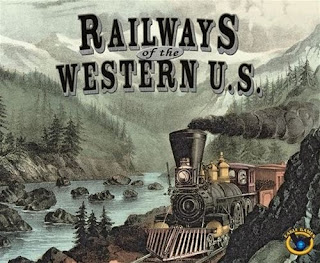 Let's say you're playing Railways of the World (which, by way of reminder, is just Railroad Tycoon with a map of Mexico in the box), and you start wondering if there's a really huge map you could play with lots of mountains, so that nobody can actually build any interesting trains before the game ends. If you are thinking that, then you're in luck - you can play Railways of the Western US!

It seems that the reason Eagle Games reworked Railroad Tycoon was a pretty classic one - expansions. By making the game the base set that comes with two expansions, rather than a game specifically about the beginning of the train age in America, they have provided themselves an opportunity to create a whole lot more. And that means they can sell more, which as we all know, is basically why you bother making expansions in the first place.

They are already making considerable progress in the expansion department. Since they released Railways of the World in 2008, Eagle Games has made an expansion every year. Railways of Europe was the first, followed by Railways of England and Wales, and the 2010 release let you build tracks all through the Rockies and Sierra Nevadas, mostly with John Henry and some Chinese immigrants.

If you’re familiar with the Eastern US version of Railways, it’s not like you’re about to stumble onto a whole new game. It’s a new map, which means you don’t have to keep playing the same one over and over, but you could have found that in either of the previous releases, so that’s not a fantastic reason to buy an expansion, unless you have already played the other two until you’ve worn the ink off the board (which reminds me, I need to quit doing lines off mine).

There are a couple new things in the Old West with Trains. New operations and barons are expected, and basically replace the Eastern US cards with their Western US equivalents. But one thing that makes the game considerably more interesting are the color spinners, which change the color of a few of the cities, allowing more opportunities to deliver different color goods every turn. Fuel depots are cool, too, and let you make longer deliveries when you would otherwise be unable to make them work because your trains suck. Of course, you wouldn’t need them if you didn’t keep insisting that the kiddie train at the zoo could deliver cattle to Dodge City. I told you that wouldn’t work.

The new rules elements are interesting, and definitely add a twist to the original game, but the only real reason I can see to play Western US over Eastern US is if you’re bored with New York and want to build out of San Francisco. However, if you regularly play Railways with more than four people, Western US should be your next purchase.

The various maps in the expansions for Railways of the World come in many different sizes, from the gigantic US maps to the miniscule and brutal Mexico map. But if you really need some room to stretch out, the fact that half of the Western US map is covered in mountains will really give you some room to breathe when you’re playing with a crowd. Conversely, a map this expansive will almost completely isolate the opponents in a three-player game, so it could be a real drawback if you like to swipe goods and block people out of their favorite cities.

What you want out of Railways of the World will largely determine whether or not you want the Western US expansion. If you have a large group and want a little more room, this is a good idea. If you play with small groups and don’t like to be cutthroat, you have another good reason to get the Western US. On the other hand, if you despise train games with low interaction, or if you’re looking for an expansion with a thrilling new take on an old game, you may not see much here to whet your appetite. And if you hate train games, then we can assume that you are only reading this review to see if I make another joke about cocaine.

Many of my initial problems with the original version of Railways of the World are still present in Railways of the Western US. For instance, I can still barely tell the difference between the purple and blue. And why can’t I establish industry in a town and turn a gray city red? What if I’m surrounded by red cubes and no red cities? And while I absolutely love playing Railways of the World, I haven’t played Eastern US (or Mexico, or Europe, or England) enough to need a new place to lay track just yet.

On the other hand, I do love the Old West, and while this is kind of a top-down view, I still feel a touch of history when I finally build a line connecting San Francisco to Salt Lake City. I can imagine the train rolling into Fort Worth, loaded down with cowboys, troublemakers and very smelly cows. The fuel depot and the city spinners are cool new additions that definitely change the way you play, so those are also neat.

In the end, I’m glad I have Railways of the Western US, and won’t be dumping it any time soon. I’ll definitely play the hell out of it, especially if I can get a bunch of people together – this map is too damned big for just me and my family, but it would rock with half a dozen railroad barons. And as big as it is, I could do a ton of coke off it.

Pros:
New map
Huge, with lots of room to spread out
A couple cool new rules add some little twists

Cons:
Low on interaction with two or three players

If you run over to Noble Knight Games, you can pick up Western US right here, and save some greenbacks while you're at it:
WESTERN TRAIN LINK
Posted by Matt Drake at 2:55 PM

I have picked it up but have not played it yet. What has been rocking my socks is the Mexico map. I purchased the cards off Artscow and I love how tight and close that board is. I never end Mexico with less than 14 shares.

There are a couple of minor differences between RRT and RotW. Namely that one of the three starting cards in RotW is now "collect a rainbow (4 different cubes) and get 4 points", some additional hexes on the board (around New Orleans and up on the East Coast against the ocean), dots on the mountain ranges so you know when you pay 4K, and they cleaned up the water rules. Plus the cubes in RRT are larger

I just got western and can't figure out how to distribute the goods cubes. I don't have enough for every city.

Wish I could help, Abby, but my copy of this game went up in the fire and I haven't bought another one.