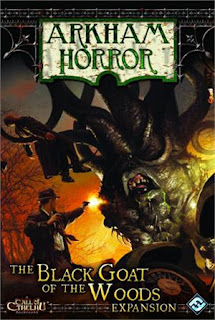 I've been thinking about Arkham Horror lately, and trying to decide if the town is cursed, or if I am. Every time I show up, people die and monsters drop out of the sky. I kind of wonder if it's like Murder She Wrote - everywhere Angela Lansbury ever went, someone died, and somehow, it was never her fault.

Of course, in my case, nobody actually dies, because it's just a game. But if it were a real place, you can bet your ass I would be on some kind of official no-fly list. Last time I visited, Azathoth tried to wake up and eat the world, and some crazy goat thing was setting up shop out in the woods to help him. Why, I don't know, because that crazy goat thing was just as dead as I was if Azathoth popped up from his nap with a rumble in his belly and turned the whole world into a gigantic unhappy meal.

The reason the goat was helping the Lovecraft version of Galactus was because I was playing The Black Goat of the Woods, in which a thoroughly twisted cult is working with a totally screwed-up supernatural entity to release a completely malevolent ancient being of unimaginable power. It's a cool expansion for Arkham Horror that adds new monsters and cards and stuff to make Arkham Horror even harder than it already is, just in case you were winning too often and having too much fun.

Actually, Black Goat of the Woods was a lot of fun. We infiltrated the goat cult, and then things went from bad to downright nasty, as we started gaining corruption cards that hastened the coming of the planet snacker. We met new monsters and killed them. We wandered in and out of gates to alien dimensions, closing them as fast as we could, but those damned cultists kept screwing us by busting out more monsters and hustling up the clock timer.

Black Goat isn't the most flexible or universally applicable expansion for Arkham Horror, but it did something we've been needing - it made us lose. We had reached a point where we were almost guaranteed to win every time, using our idiot-proof formula of getting a blessing and then succeeding at everything with almost no effort. Black Goat makes the game harder, and it screws up the winning scheme we were following, which means that Arkham Horror gets interesting again.

The reason Black Goat of the Woods makes Arkham Horror more difficult is because of a few different elements. The cult of the Thousand Knuckleheads is interesting, and the corruption you get tends to snowball pretty quickly and is pretty fun. You'll have all kinds of horrible encounters as you infiltrate, and it turns out this is a pretty nasty cult. They don't even have any of that free love you used to hear about in 70s cults, just gross monsters and stuff. I was hoping to join up and then get three subservient wives who would walk around the house naked and cook all the time, but all I got was creepy people in robes who kept summoning horrors from alternate dimensions. Talk about a letdown.

The herald (which would be the black goat mentioned in the title) is really mean. More monsters will be popping out, and some of them will make the sleeping giant wake up faster. People in town get scared faster, and bad stuff generally happens all over the place. It's a great way to accelerate the clock and goose the big bad bogie to get out of bed. Which is great if you're good at the game, but really problematic if you always end up waking the big bad guy and then getting eaten.

The story for Black Goat of the Woods is not as interesting as the Dark Pharaoh expansion, and you probably won't want to shuffle the new cards in with the old ones. But if you want to try something new, and you want Arkham Horror to be as difficult as you remember it being when you first learned how to play, you really ought to give it a whirl. It's a fun expansion, and it adds more to the game, and that's what expansions are supposed to do.
It still doesn't explain why this stuff happens to Arkham every time I show up. That town is a mess.

Pros:
Adds a new, interesting story
Infiltrate a cult and battle even more heinous monsters than normal
Ratchet up the difficulty level, which is great if you win too often
New monsters and spells and items and other cool stuff

Cons:
Not for new players - you will get stomped
If you want Black Goat of the Woods, so that you can also get stomped in the balls by forces powerful enough to strip you of your sanity, you can get it from Noble Knight Games. Well, OK, they're sold out right now, but if they get another one, it will be here:
GET STOMPED IN THE BALLS
Posted by Matt Drake at 4:41 PM

Hey, my brother from another mother, let me ask you this:

You mentioned a foolproof plan to win every time that involves the blessing. I always seem to lose it on the "do you LOSE the blessing roll".

I find it truly ironic that in order to lose that blessing, you need to roll a 1, which indicates that you lost the blessing both in-game and in life.

Anyhow, I'm loving Arkham, but we lose...a LOT. Can you elaborate on the "master plan" for the cockpunching of the myriad Cooloohoo baddies that always seem to come through the portal and bite our collective nuts off?

Here's what works for us.

Yeah, we lose our blessings, but the thing is, you can swap a gate trophy for a blessing any time - and you can give that blessing to anybody. So while your gun-toting gangster is putting holes in cultists up at Independence Square, your brainy researcher is off asking Father Micheal for a little more mojo for your tommy gunner and chief ass-kicker.

How many players do you have, TNT? More players makes a much easier game. We lose a lot more with two than we do with four, for instance. And when we've played five or six, we've actually managed to close every gate at the same time. It's really hard to do that, because they keep opening all the time. We usually just seal 'em all up with elder signs and clue tokens. Only once did we actually beat the bad guy after he woke up. Usually he kills us in a most unattractive manner.

If you only have one other person to play with, try playing where each of you has two investigators. That should help.

Oh, one other thing - shop at the curiositie shoppe a lot. And always, always choose the elder sign. That's like the 'you win the game' card.

Thanks for the tips, hefe! We usually play between 3 and 5 players, and we pretty much always end up as a ghoulish hors d'oeuvre for the big nasty.

We generally attempt to get the gates fast, but we've never really had a "master blaster" whose sole purpose is killing the crawlies. It just never seems to work out that way, for some odd reason.

Definately going to try, and thanks again.

As a pretty dedicated AH player, gotta say Matt's got it down on how to win the damn thing for the most part.

Best tactic (out of the three possible) for winning the game is to close and seal 6 Gates. Forget for the most part trying to close all the Gates at the same time. It *does* work, but rarely and only with a stupid amount of luck. Which is a premium in AH. As for fighting the Great Gooey One - you really don't wanna go that route if you don't absolutely HAVE to.

So yes - ABSOLUTELY - try to keep $5 on you at all times and shop the damn Curio Shoppe for Elder Signs at each and every opportunity. Or gobble up the Clue Tokens and use those. Time is at a premium in AH, so don't ponce about *too* much.

We play a four-team, and if allowed to choose our investigators, we go with:

Old Professor Dude - just because it's a signature Lovecraft hero to have. And the Sanity loss reduction ability comes in handy at times.

The Hot Chick Researcher - Her "anybody can re-roll one botched test per turn" bit is INVALUABLE. She's a must-have.

The Indiana Jones Clone With The Name Of A Popular Cheese - A bit weak in the Sanity department, but the ability to draw and extra Artifact ups the math on getting those coveted Elder Signs can make or break a session.

Gangster With Tha Gunz - He's our monster-cleaner-upper. You should have at least one of these running about keeping the streets clean so you don't find yourself trying to have to sneak past something really annoying and deadly like a Star Spawn of Cthulhu or a Shoggoth. That can get old quick.