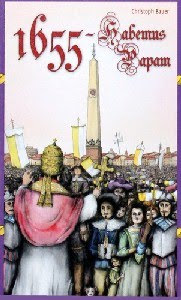 If there's one thing that identifies gaming as a nerdy pastime, it's the fact that we can make a game about anything. It doesn't take long to exhaust the demon-hunting, Nazi-killing, and alien-blasting, and then we move on to boring crap like farming and storing things. Historical events are traditionally a big winner, but they're generally focused around something violent. For some convincing evidence that we can make a game about damned near anything we want, I present 1655 - Habemus Papum.
This is a bidding game about electing the pope. Yes, you read that correctly. Electing the pope. If there was ever a theme less fascinating, it probably had something to do with milking sheep or harvesting artichokes. But I guess in 1655, electing the pope was kind of a big deal.
At least, someone in Germany thought this was a big deal, big enough to make a game about it. They probably invented the game as part of their masters thesis at a depressing German university. It's all historical, full of actual cardinals who were actually jockeying to become the next pope, and it even includes historically significant factors such as rich Spanish people and the king of France. There's even one cardinal who doesn't vote, but influences other cardinals, because in 1655, he didn't vote, and influenced other cardinals.
With a theme this sparkling and thrilling, you know the game just has to be dynamite. In case your sarcasm detector is broken, I should point out that I am not being honest. A theme this depressingly European almost has to be married to a stupid game. And if you buy this game, you might never actually know if the game is stupid, because in order to play, you will have to read the rules.
If you read game rules in your native German tongue, then you probably won't have any problem with this game, beyond it being a game about bribing religious leaders. But if you have the extreme misfortune to read this game in English, you are either in for a thoroughly frustrating time, or one of the most accidentally hilarious gaming events of all time.
The translation for 1655 was almost certainly performed by circus clowns who spoke neither English nor German, and simply guessed at the words based on hand gestures and a complicated game of charades. The mistakes range from unintentionally funny to completely obscure. You may chuckle to yourself when you read, 'when a player is sucked dry,' because that's not a blowjob joke, that's just the rules describing someone with no money. But you will be more confused than Jessica Simpson on Jeopardy when you read 'a player must personal most of the time a set of cardinals.' I'll be honest, I still don't know what that last one should have said.
In fact, there are blocks of rules that we were forced to completely ignore, thanks to having absolutely no idea whatsoever what they meant. There were sentences that contained words that were apparently chosen completely at random by throwing darts at a dictionary. The resulting chaos means that even after playing the game twice (because we had no idea what we were doing the first time), I still know beyond a shadow of a doubt that we did something wrong. I just don't know what it was, because I can't understand that part of the rules.
Interestingly enough, the game itself is not entirely horrid. I hated it the first time I played, because it didn't make any damned sense, but once I figured out what the rules were actually trying to tell me (mostly - like I said, there are still parts I don't get), we had fun. I can think of fifty games I would rather play, but 1655 is not a complete travesty.
It's basically a bidding game. You have a handful of gems, and every turn cards become available that will get you votes. Some cards combine with other cards for more votes, and some cards just make it easier to get more cards later. You bid with these little plastic gems, and try to outbid everyone else when you really want to win while saving your money when you just don't care. Probably 90% of the game is just placing your bids and picking the right cards, and the rest is playing the action cards that let you place better bids or pick better cards. It's a pretty smart game, at times, even though it's a bidding game (which I don't really like) about electing a pope (about which I don't really care).
I have to wonder what kind of gamer sees this game and says, 'Hot damn, I have to own that! Electing the pope through 18 turns of bidding?! That's just what I've been looking for!' I'm almost amazed at how little 1655 appeals to me, though I should not be surprised, because I don't care for bidding games and electing the pope is a really boring theme. However, I can acknowledge that there are people who actually enjoy boring games about boring events, even if I can't imagine wanting to spend any more time with this game.
One thing though - even if I'm willing to grant that 1655 could be fun if someone else was playing it, I'm not giving an inch on the translation. This was worse than Bolide, and those rules had made-up words that didn't even mean anything.
Summary
3-4 players
Pros:
Historical theme
Nice quality cards
Decent bidding game with some tricky decisions
Cons:
Boring theme
Ridiculous translation
Boring bidding game with boring decisions
I don't know where you can find a copy of 1655. Maybe you can get a friend who thinks that it's hilarious to see you make fun of bad games. Then he can buy games that you will hate and send them to you in the mail. At least, that worked for me.
Posted by Matt Drake at 6:13 PM

At least you don't have to worry about the Pope being a f@#$ing cylon and sabotaging humankind's last hope for survival.

Unless that was one of those engrish rules you missed.

Being a German I had it a lot easier to understand the rules. But even then it remains a game sucked dry of any fun.

Maybe they used a machine translator rather than using an actual breathing person that they'd have to pay. Although some of it is so bad they must haved cycled it from German to English and back a few times for extra obscurity.

"I have to wonder what kind of gamer sees this game and says, 'Hot damn, I have to own that! "

Oh. That would be me then. found this by Googling for reviews. I thought it was great after the first play. I don't care about the theme, but the bidding mechanisms are great.